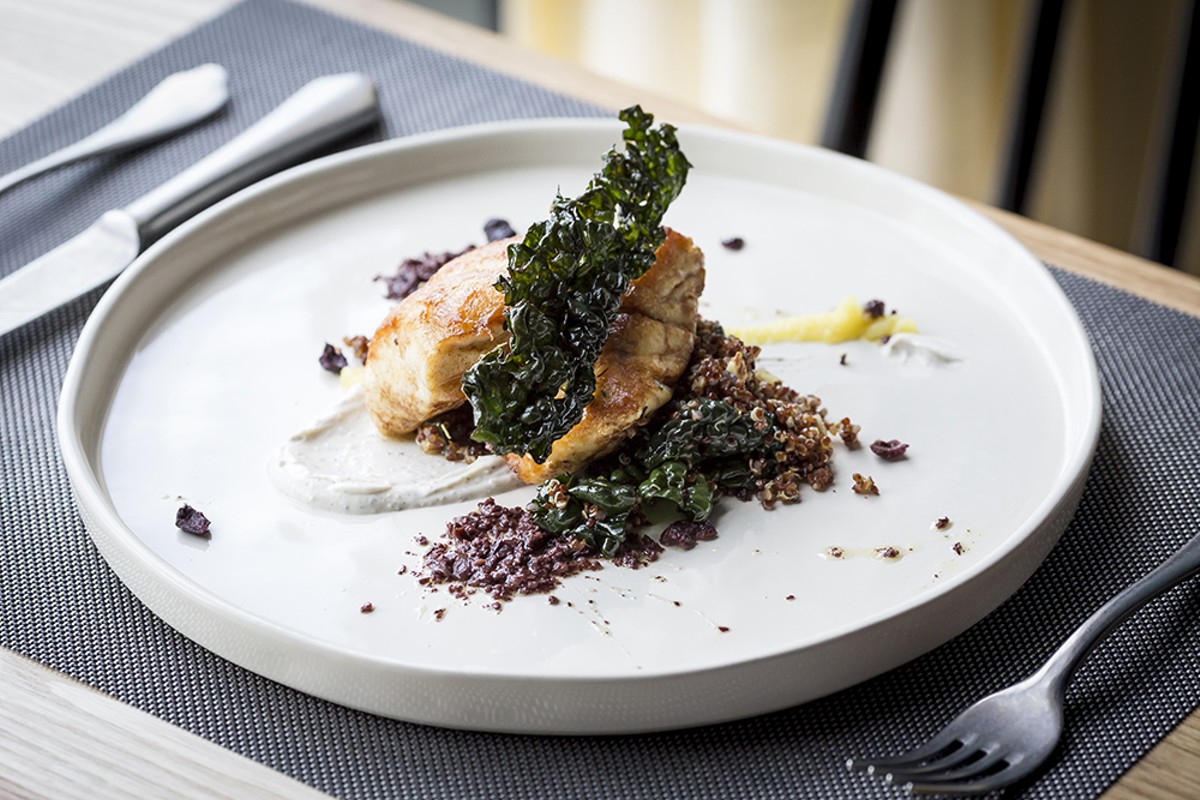 "This is the most romantic place we've dined in," cooed my dining comrade (not my wife) as we took a seat inside a windowed alcove in the carpeted dining area of nouveau brasserie DoveCote. The interior, as described to me by Andrew White, whose company, Lot1433, oversaw the restaurant's design, is "a bit of a mashup with traditional French meeting a touch of modernism." It's a lot of a mashup in actuality, with Fauvist, Expressionist and Gilded Age elements fusing in a schematic free-for-all that gave rise to my pal's rare (and I mean rare) moment of sentimentality. Thing is, it was hard to argue with him, but while White's artistry tugged at our heartstrings, chef Clay Miller's "French-inspired" dishes had us in full swoon.

Having worked with such names as Boulud (Daniel), Cardoz (Tabla), Keller (French Laundry) and Van Aken (Norman's), and being named one of Food & Wine's Best New Chefs of 2010, Miller no doubt has the chops. The idea for a brasserie, however, was borne from a conversation Miller had with James Petrakis, a minority partner in the venture along with Julie Petrakis and Gene Zimmerman of Courtesy Bar fame. The result of that conversation: arguably, the finest restaurant in downtown Orlando.

Miller, a serious sort not easily given to modish cooking vagaries, nevertheless employs the use of foam in his tomato water risotto ($13.50) with cherry tomato gremolata, but it's not merely a trendy affectation. Here it adds an airy and even artful counterpoint to weighty, flawlessly cooked risotto with four wonderfully charred cherry tomatoes poking out of an Elizabethan collar of Parmesan crisp. On the other hand, a spume obscured mild yet flavorful pork cheeks ($29) braised in vermouth and hillocked with cauliflower, button mushrooms and apples. It's a mighty fine dish anyway, though the promised truffles failed to materialize.

Calling yourself a brasserie necessitates offering both steak frites ($38) and moules frites ($19), both of which are exceptionally prepared here. The hefty steak is shellacked in béarnaise butter, and the formidable fries were enjoyably swirled in a well of bordelaise. On occasion, a cote de boeuf (price varies) of bone-in ribeye will be offered as a special – I say this for the benefit of cutesy couples who love canoodling over a single entrée.

Miller even veers into French colonial territory with a light, creamy Vietnamese seafood stew ($12) of shrimp, crab and oysters. One slurp is all it takes to know a deft hand was behind the perfectly balanced broth of coconut and lime. The sweetness is faint; the tang subtle; and the texture of crushed peanuts and sesame seeds exquisite.

By the by: We always make it a point to get the pain maison ($3) – or housemade rolls – served with black olive butter and roasted garlic. On our last visit, though, the bulb sat in a condiment cup filled with olive oil, which made squeezing the garlic an untidy endeavor. When asked why the garlic came drowned in olive oil, no explanation was offered. Servers, it should be noted, appear skilled and qualified, but are sometimes guilty of being overly inquisitive. Being asked, "How's everything?" has its limits.

What doesn't have limits is my love for eggy Grand Marnier souffle ($9), and DoveCote's is one of the best I've had in recent memory. Petit fours ($4) – on my most recent visit, orange zest nougat, shortbread, a truffle and an unfortunately rubbery mini vanilla bundt cake – are parfait for those whose bellies scream no, but eyes plead yes.

Cocktail-wise, a stiff Norman negroni and a Sazerac were just our speed; sweet vermouth on tap, while gimmicky, is popular as hell with the raw bar crowd here. There's an admirable list of French wines as well – many offered by the glass (are you listening, Urbain 40?) – which really comes as no surprise. After all, Miller and his high-powered band of partners are all about getting down to brasserie tacks.

« You'll love Pizza Bruno's pies, any way you slice it   |   The Vietnamese-inspired pan-Asian fare at Viet-Nomz is on trend »