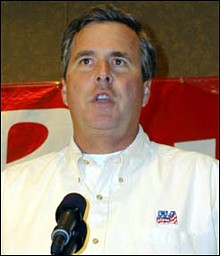 John Ellis Bush's second inaugural address, delivered the Tuesday after New Year's on the steps of the Old Capital Building, was the kind of folksy tribute to individualism hard-working Americans seem to love. The speech mentioned God five times, faith three times, as well as one reference each to the Bible, humility, gratitude, generosity, caring and a lack of coddling from first mom Barbara Bush. We learned that Jeb holds friendship in high regard, and that he believes education is "the most important function of government."

But none of these items quite rose to the level of what the 50-year-old Bush holds most dear: personal responsibility. Self-government has been an obsession of Bush's since at least 1995, when he co-wrote "Profiles in Character," a paean to self-sufficiency published by the Foundation for Florida's Future, a nonprofit founded by Bush in 1994.

In the book, Bush was troubled by the decline of the average American's ability to govern himself according to old-fashioned principles, which he blamed on the decline of church worship and an increase in abortions, divorces, out-of-wedlock births, lawsuits and lawyers. Bush's answer to the problems? Better role models, not more social programs. "Governments do not raise children," he wrote. "Governments do not teach hard work, responsibility, perseverance."

That same up-with-the-self idea was present in Bush's inauguration address. "My parents have shown me that when we accept personal responsibility for ourselves and those we love, we don't have to invent government programs that apply complex rules to matters better addressed by profound human caring," he said. "What is a checklist compared to kindness? What is agency procedure compared to compassion?"

Government might not fill an empty heart, but it has shown an ability to feed, clothe and house people when necessary. That's why, for example, the state has set aside $290 million in trust funds to build affordable housing.

The trust not only pays for more low-income housing -- reason enough to fund it -- but also for thousands of construction jobs.

Yet Bush -- facing a severe budget crunch that lawmakers will work out between March 4, when their session begins, and the end of May, when the Legislature adjourns -- is proposing a budget that will empty the trust accounts into the state's general revenue fund and reallocate a portion back to the affordable-housing program. The reallocation, however, will create a $94.5 million gap between what the accounts are worth now and what they will be worth once Bush has finished with them.

In the same manner as the affordable housing trust funds, Bush would like to eliminate the $200-million trust designated for a variety of environmental items: maintaining park trails, destroying invasive plant species, land acquisition and hiring biologists. Bush would then return a portion of the $200 million to fund ecology-related expenses.

Environmentalists are fearful that once the trusts are emptied, they will have to fight each year for money the trusts were reserved for.

"On its face, the proposal is not objectionable," says Eric Draper, Audubon of Florida's director of policy. "But once you begin taking money out of the trust funds, it can be used for any purpose. It's hard to argue for land acquisition when education also needs scarce dollars."

College students will also be pinched. The governor wants to cut $111 million from the state university system and ask students to stomach a 7.5 percent tuition increase.

Medical patients can also worry less about complex government rules. Bush wants to eliminate a program that pays medical bills for people who suffered a catastrophic illness but who have earned too much to qualify for Medicaid. He would also cut another Medicaid plan that pays for eyeglasses and hearing aids for the elderly and disabled.

Both cuts fit Bush's Medicaid philosophy. He asked the president in a letter last fall to re-write the Medicaid law "to give greater flexibility to states in determining Medicaid program designs" so that states might "move away from entitlement without responsibility."

Death-row inmates, never a favorite of Bush's, will find it more difficult to appeal their sentences under the governor's budget proposal. The governor wants to save $3.8 million by closing the Capital Collateral Regional Counsel, which currently handles 216 of 365 death-row appeals, and privatizing the capital appeals system.

Teenagers also don't fare well under the Bush plan. He would cut all of the funding -- $9.7 million -- to the statewide PACE program, which guides at-risk teenage girls back toward the mainstream. If the funding isn't restored by the legislature, the PACE Orlando office on West Washington street will close, putting 52 at-risk girls back into the Orange County school system.

Likewise, Associated Marine Institute, which provides day-treatment programs for nearly 3,000 juveniles, including 85 in Orlando, will have to close if it loses $11.5 million, as Bush proposes.

The institute provides a range of programs, from drug counseling to dental care, for teenagers convicted of a crime. Bush does promise to hire 122 additional probation officers to provide intensive supervision for teenagers in the day-treatment programs. But probation officers aren't social workers, and once PACE and AMI are gone, they're likely gone for good.

The trouble with Bush's budget proposal isn't the cuts he wants to make. He's wanted to make similar cuts to Medicaid and youth programs since he's taken office. "This has been going on the last three years," says Dan Toffoli, director of the Orlando Marine Institute.

The difference this year is that Bush is more likely to achieve success.

There's actually $633 million more in Florida's general revenue fund than last year and the state has $960 million in an account reserved for emergencies. But voters approved a high-speed rail system and a reduction in school class size, requiring state government to be prepared to spend billions of extra dollars in the next few years

The mandates have allowed Bush to further push his less-is-more philosophy into the budgetary process. He will cut another 3,000 state jobs while continuing, for example, to allow the tax-exempt holidays shoppers like so much, which will cost the state $59 million.

"Is it really necessary to save $6 on taxes if you buy $100 worth of clothes," asks Ron Klein, the Florida Senate minority leader. Corporations, meanwhile, were handed a $400-million subsidy in the form of three-year tax breaks, part of a President Bush economic-stimulus package that 38 other states failed to enact.

The irony is, of course, that while Bush subsidizes the wealthy and harps on personal responsibility, he (a millionaire land developer himself) continues to shrink from professional obligations. If Bush were more duty-bound, he'd realize that in his final four years as governor, he has the political clout -- based on his family name and convincing re-election -- to tackle the state's antiquated taxing system, which relies on sales taxes for 59 percent of its revenue.

This month Governing Magazine published the results of a one-year study of state taxing systems and found that Florida was one of four states with the most inadequate and most unfair taxing systems in the nation. (Nevada, Tennessee and Texas were the other three.)

"The state is extremely regressive," the report said.

Rather than dirty his hands in the debate to augment the state fund by increasing property, corporate, or, heaven forbid, by instituting a personal income tax system, Bush asks for a budget that hurts Florida's working families under the guise of a financial emergency. At the same time, he insults the disadvantaged by saying it's up to them to strive harder to achieve the same type of status he inherited at birth. It might not be the Christian way, but it does sound remarkably personal.