Best Mound of Dirt: The leftovers of the round building at the Dr. Phillips Center via Bungalower.com
When the love child of public-private partnership in the form of a new, world-class arts center for downtown Orlando was delivered, with it came a giant anthill of leftover debris from the demolition of the so-called “round building” that used to be located on the premises. The city had to dismiss Crusader Demolition (some say the organization walked off the job) after the company took forever to take the building down. Even after it was finally gone, the lovely Seneff Plaza hosted a giant hole and a pile of dirt where the building used to be – something even Sheryl Crow pointed out when she was in town for a free outdoor show there. A second company, Pece of Mind Disposal (seriously), was issued a new contract to remove the debris, a task that should be complete by the end of the year, according to the city, and should bank the city $129 million in “liquidated damages.” Molehills into mountains! 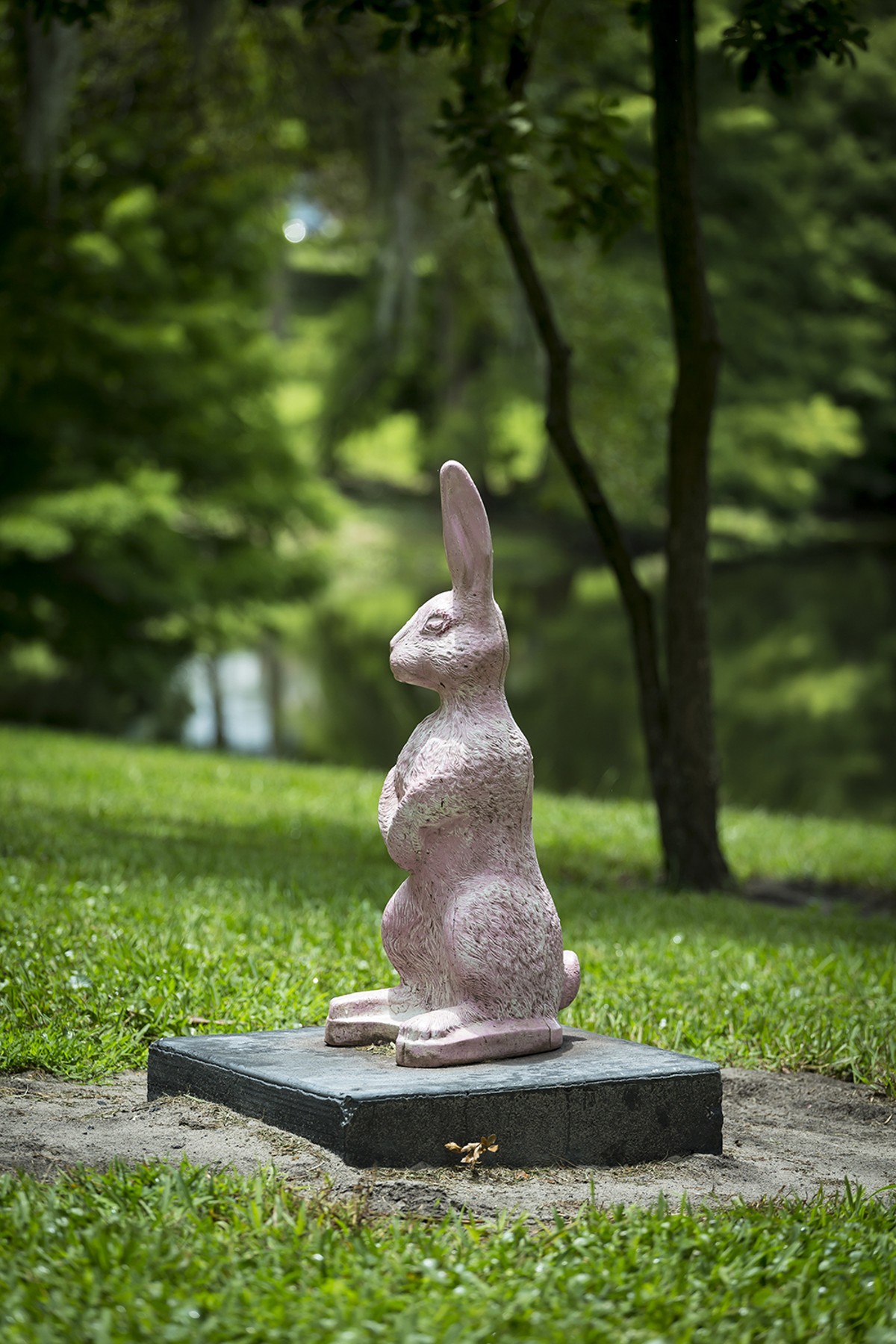 Rob Bartlett
It appeared in Lake Como Park in spring 2014 – a statue of a pink bunny perched on its haunches peering out at cars that drove around the east side of the traffic circle. Another bunny statue just like it appeared in Langford Park, as well.  The statues were erected by City Commissioner Patty Sheehan, who applied to have them installed in honor of her former aide, Chase Smith, who died of cancer in 2013. Smith played the Easter bunny for Easter egg hunts in both Como and Langford parks, and Sheehan thought it would be a nice way to honor his memory and his contributions to Orlando. But earlier this year, some residents living on the circle started complaining about the statue and insisted that it didn’t belong. Sheehan, who didn’t want her friend’s memorial tainted by negativity, made plans to move the bunny to a park in another neighborhood. But that’s when things got really interesting. Within 24 hours of posting to Facebook about her plans to relocate the bunny, a different group of neighbors chained the bunny to the ground, erected a “Save Our Bunny” sign behind the statue and asked Sheehan to reconsider. In the end, the bunny lovers defeated the bunny haters, and Chase Smith’s memorial stands in its original spot. 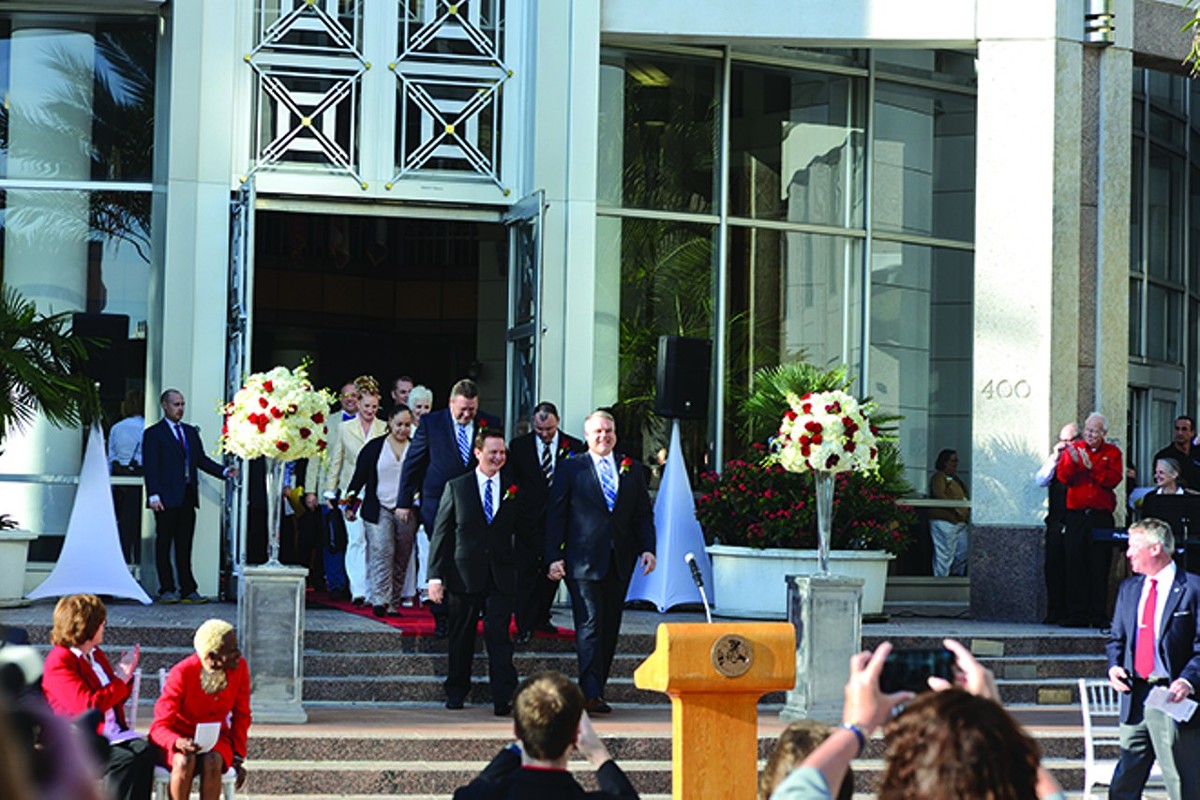 Carlos Amoedo
When the state’s battle against approving gay marriage finally broke down as a sort of New Year’s Miracle at the beginning of January, the city of Orlando set into motion a plan to make a pretty amazing spectacle by hosting a mass marriage ceremony right there, in broad daylight, on the steps of City Hall. Mayor Buddy Dyer and Commissioner Patty Sheehan headed up the ceremony, which went off without much of a hitch – one heckler was heckled back into silence – and we all lived happily ever after. Especially after the landmark Supreme Court decision this summer, which put a halt to the state-by-state bans and put a heart on the end of every tweet from the rooftops celebrating #LoveWins.

Florida’s Republican Senate President Andy Gardiner, a fresh face from Orlando whom you may remember from media events with Gov. Rick Scott at Beefy King, pulled a surprise move this year when he introduced a healthcare expansion compromise called FHIX. House Republicans, who obstinately refused to consider any legislation that looked like it might be a nod to Obamacare (although, in truth, the comprehensive plan would have benefited hospitals and insurance companies, but the truth isn’t what Tallahassee pols were looking for), balked. In the tug-of-war that tied up much of the 2015 session, conservatives who opposed healthcare expansion for low-income individuals prevailed. No expanded Medicaid, no FHIX and no resolution to the healthcare crisis for us. Thanks, politicians!

Best Reason to Learn the Back Roads of Colonialtown: Closure of Bumby Avenue between Corrine Drive and Colonial Drive

That disheartening clutter of traffic signs at the popular intersection of Colonial Drive and Bumby Avenue could steam you on days when you require a direct route, but now is as good a time as any to learn the back roads of Colonialtown. It’ll help you get around this inconvenient dead-end and prep you to become a pro back-seat driver when you Uber downtown.

Not for the minimalist at heart, this hotel is an overstimulating festival of blinking colors and weirdly interactive mechanical characters. It greets you with a moaning ogre and a spitting dragon, there’s a special spot to stomp on and make a fart noise, and a Lego key opens your monkey-guarded room safe. The elevator is an ’80s disco experience you won’t forget, and the rooms – each themed for a Lego toy line (Pirate, Kingdom, Adventure or Lego Friends) – will make your head whirl.

Photo by Erin Sullivan
When the back-and-forth on the redevelopment of the Citrus Bowl eventually landed on, “Yes, let’s do it in a big way,” most of the local population didn’t give it a second thought. But in the end, it wouldn’t go so smoothly, even with a giant Rolling Stones concert to seal the deal (plus some soccer games that everyone apparently loves to attend). The adjacent Tinker Field baseball stadium, located right next to the Citrus Bowl, was in the way of progress. And even though the field once hosted Dr. Martin Luther King Jr., who made his only public appearance in Central Florida there, few public officials seemed to really give the field its due. Over the years, Tinker Field has been relegated to hosting Electric Daisy Carnivals and the like, and the field was mostly in shambles. However, community activists felt it was important to save the historic baseball field and begged the city to renovate it, turn it into a community resource and preserve it for future generations. That, however, did not jibe with the mayor’s plans for the bowl. As a compromise, the city preserved the diamond, agreed to throw up a plaque of historic designation and call it a day. So, basically, the field will continue to be used for EDM dance parties and overflow for larger Citrus Bowl events. 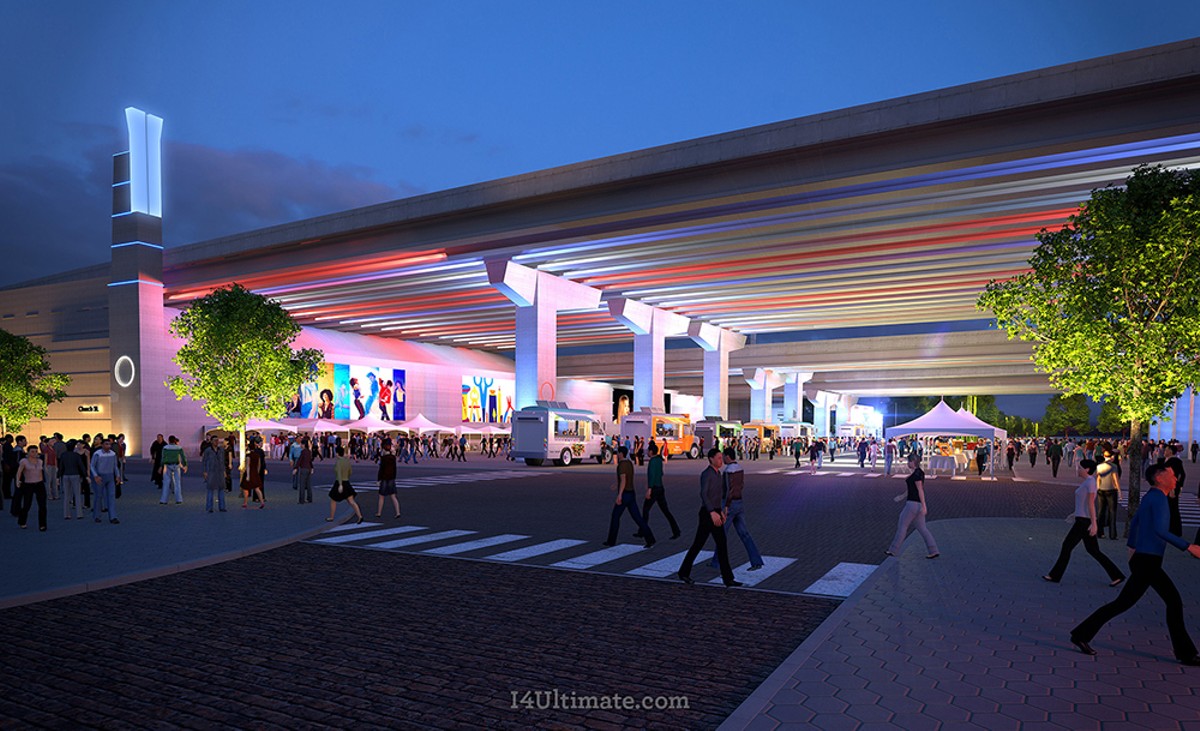 As if you didn’t think your I-4 commute was bad enough, the Florida Department of Transportation has started to tear up a 21-mile gash of Central Florida’s main headache-inducing artery to make room for express lanes that’ll charge tolls depending on how much traffic is traveling on the roadway at any given time. The $2.3 billion project (aided by a $950 million loan from the feds) will affect 15 interchanges, close a couple of ramps indefinitely, and provide drivers with the strange distraction of trying to figure out exactly how much will be charged to their electronic toll transponders. Happy hating!

Back in the halcyon days of 2012’s Textgate scandal, it seemed that the Orange County Board of County Commissioners, led by Mayor Teresa Jacobs, had hit a wall in its attempts to shield its internal relationships with lobbyists and Republican operatives. State Attorney Jeff Ashton gave them all slaps on the wrist for deleting text messages and let them know they’d been bad, bad public officials. But rather than let that be a lesson, the county took its communications to an even less transparent model – it started using Dropbox to communicate via the cloud. When political activist group Organize Now learned of this, it went to court to demand access to what was in the Dropbox account. Organize Now won. However, by the time they got there, some of the records in the Dropbox had been deleted. So they then sued to ask for IP addresses that had access to the account. Organize Now won that suit, too. The county responded by ditching Dropbox as a communication platform, noting that it was fraught with security concerns. We can’t wait for Snapchatgate!

It was history buffs and architecture purists versus moneyed developers and realtors this year, as the city commission introduced draft amendments to Winter Park’s Land Development Code, Article VIII, Historic Preservation. Silent when the Florida Building Code made construction more expensive for all in 2015, now a small clutch of bullies feels like squashing a democratic movement to preserve a few old houses. Watch the Facebook insults fly in the Winter Park Voice Facebook group (facebook.com/groups/winterparkvoice), where the profit-loving, tear-it-all-down-and-throw-up-something-new types pit themselves against the sometimes-precious preservationists who want to protect heritage.