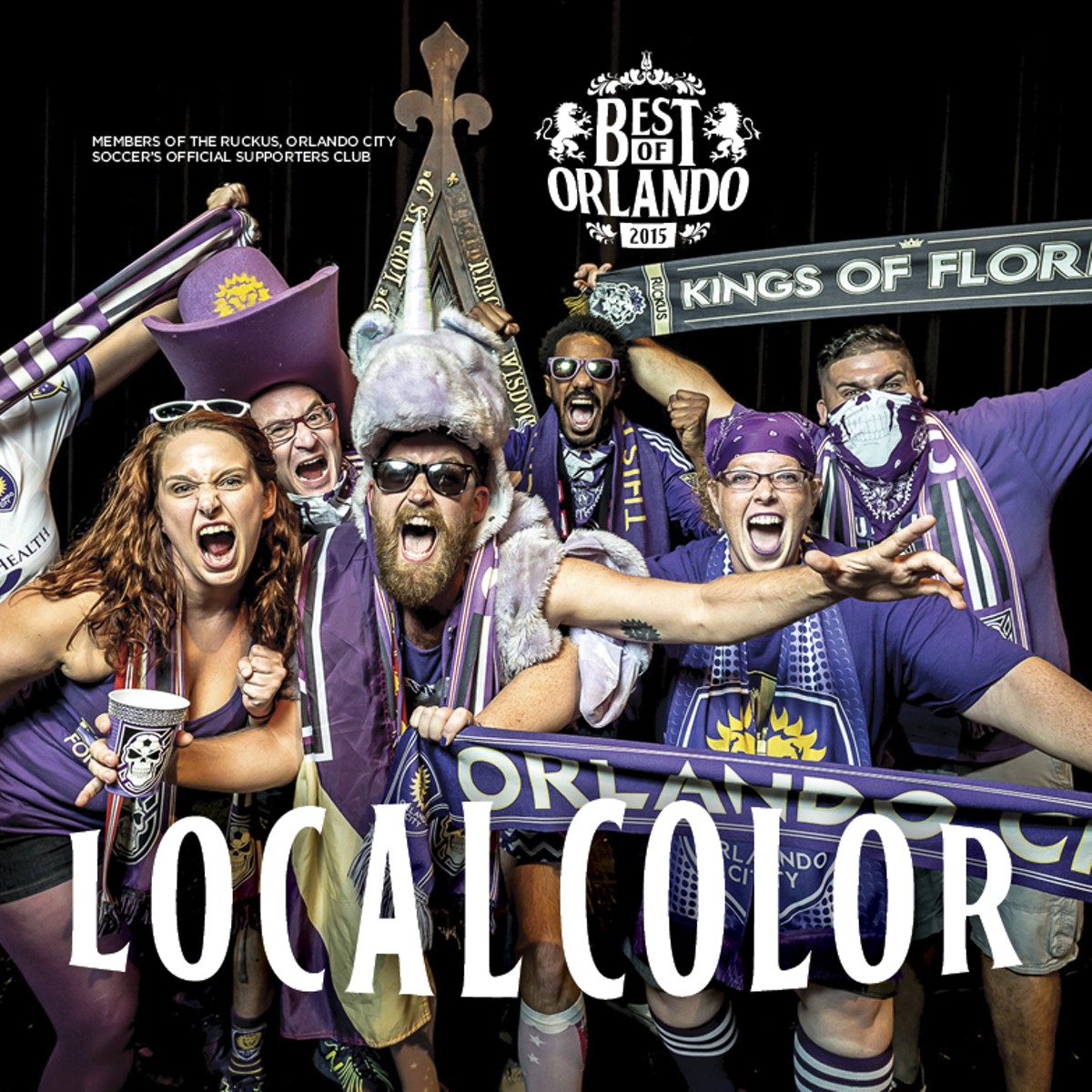 Stuff the Magic Dragon
Mascot for the Orlando Magic, nba.com/magic
Everyone recognizes Stuff the Magic Dragon as the devoted mascot determinedly flipping out about the Orlando Magic at their Amway Center games. Stuff recently won a Golden Matrix Award for Best Mascot Video from the Information Display and Entertainment Association, and he’s also the host of the charity-driven Mascot Games, proving his heart is as fiery as his dragon passion for NBA basketball. He’s been with the franchise since the very start, and his playful skits lighten spirits at Amway, win or lose.

James and Julie Petrakis
chefs and restaurateurs, The Ravenous Pig, 1234 N. Orange Ave., 407-628-2333, theravenouspig.com; Cask and Larder, 565 W. Fairbanks Ave., 321-280-4200, caskandlarder.com; Swine and Sons Provisions, 595 W. Fairbanks Ave., 407-636-7601, swineandsons.com; all in Winter Park
Since opening the Ravenous Pig in 2007, James and Julie Petrakis have worked tirelessly to challenge and support our culinary scene. Though both Winter Park natives, they didn’t meet until culinary school (they attended the prestigious CIA), after which they worked separately in various fast-paced New York kitchens. Their return to Winter Park has seen them build a small restaurant empire – the Ravenous Pig gastropub was joined by “Southern public house” Cask & Larder and the charcuterie-focused sandwich spot Swine & Sons – and their work has won them a James Beard Award nomination, acclaim from national media, and the devotion of a new generation of local food enthusiasts. 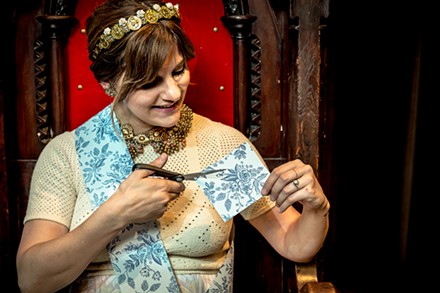 Anna Bond
owner, Rifle Paper Co., 558 W. New England Ave., Winter Park, 407-622-7679, riflepaperco.com
In 2009, Anna Bond and her husband got to work designing custom wedding invites and stationery from their apartment. Bond’s whimsical style and deft illustrations caught our eye, and in 2010, we awarded her a Best of Orlando – obviously, we weren’t the only ones she’d won over. Soon her work was featured in some of our favorite national pubs, including GQ, Martha Stewart Living and Bon Appetit, and national retailer Anthropologie picked up some of her designs to sell in its stores. Now Bond’s pieces are available nationwide, and she’s even partnered with Lauren Conrad’s Paper Crown to offer a clothing line, also available through Anthropologie.

Calvin Cearley
owner, Cloak and Dapper, 1219 N. Orange Ave., 407-250-6783, cloakanddapper.us
Before Calvin Cearley opened his “gentlemen’s general store” in Ivanhoe Village, where did Orlando men shop for clothing and accessories that weren’t big-box bland? Perhaps they picked up pieces here and there at places like Etoile Boutique, but there really weren’t any boutique shops dedicated solely to men’s goods. In late 2014, Cearley took his once online-only shop to a brick-and-mortar location, and now our favorite discerning guys have a place where they can get jeans, shoes, trousers, grooming supplies and more, all made in the USA.

Blue Star
dancer and owner of the Venue, 511 Virginia Drive, 407-412-6895, thevenueorlando.com
A classically trained ballerina who wants to make dance accessible to the masses, Blue Star came here from Atlanta decades ago and with her crazy Southern charm, came to rule Saturdays at Southern Nights as the hostess, emcee and star of Lesbo-a-gogo. As her local fandom grew, she branched out into other gigs and clubs, founded her naughty-but-not-too dance troupe VarieTease, titillated the punters with Dirty Bingo at Stardust Lounge, then launched the Venue, a performance space and home base for VarieTease. She also has become a champion for cancer patients locally, establishing the One Love foundation after the death of her best friend Tweeka (John) Barber. 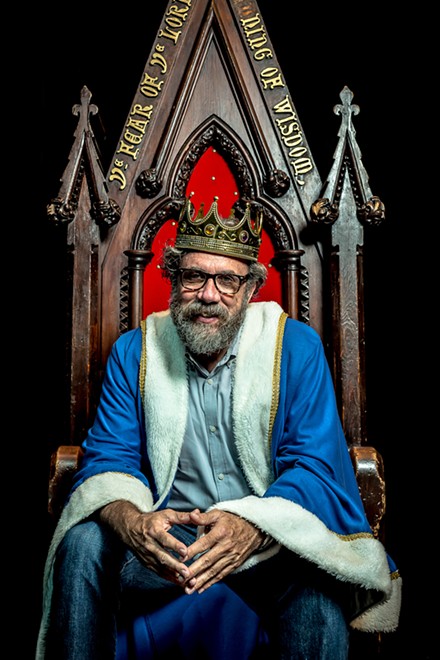 Pat Greene
artist and curator at Gallery at Avalon Island, 39 S. Magnolia Ave., 407-317-8367, avalongallery.org
From his beginnings as a conceptual artist (including a stint as part of the RS21 collective at Maitland Art Center), Pat Greene has brought a questioning energy to Orlando’s cultural scene. An inveterate traveler and reader, Greene always comes home, bringing with him new ideas and new visions to challenge banality. He made his mark as programming director of erstwhile creative space Urban ReThink, then assembled his long-dreamed-of Corridor Project, “a contemporary art museum without a fixed location,” and staged its first show, Walk On By, in 2012. In 2013 he became curator of the Gallery at Avalon Island and produced the Transit Interpretation Project, an artistic interrogation of the local bus system that was an unlikely hit, even with LYNX officials. Greene’s next “museum without walls” will be the Art in Odd Places festival Sept. 17-20 of this year.

The Ruckus
Orlando City Soccer Club’s officially recognized supporters club, ruckustilwedie.com
No soccer club is complete without its diehard fanbase, and here in Orlando, there’s nobody more diehard than the members of the Ruckus. They bleed purple, they say in their chants, and promise their team to “drink and sing and never bend, we’ll always follow you ’til the end.” If you go to a game, you can’t miss ’em – they’ll be beating their drums and rousing the crowd, and they even have their own mascot of sorts: The “Orlando Unicorn,” whose real name is Danny Voss, is a ubiquitous, beloved sight at the team’s home games.

Billy Manes
editor of Watermark
2015 was the Year of Billy Manes. In February 2015, after the state of Florida’s prohibition on gay marriage was lifted, he married his husband, Tony Mauss. In April, he spent a month at the Djerassi Resident Artists Program, where he completed his first book. And in July, he left Orlando Weekly to take the reins at the region’s premier LGBT publication, Watermark. He may not have won his bid for mayor of Orlando in 2005, and he may not work here anymore, but he’ll always be a prince to us. 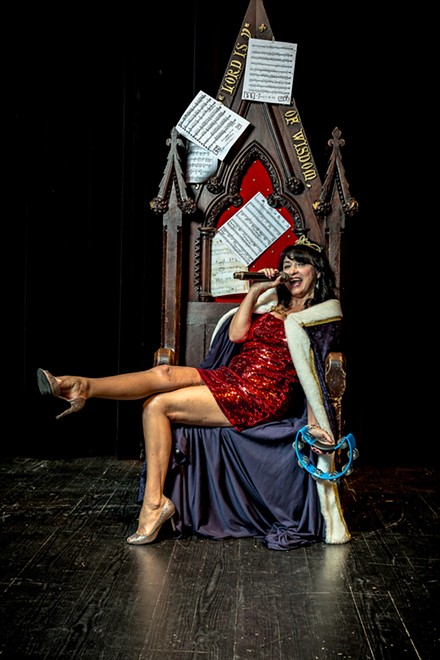 Lorna Lambey
singer
Before Winter Park decided to let a developer demolish the hotel that once housed the legendary Red Fox Lounge, Lorna Lambey and her husband, the late, great Mark Wayne, stirred things up there nightly. They brought a truly unique nightlife scene to life there, playing to a diverse crowd drawn by the surreal and lovely lounge act. Sadly, Wayne passed away in 2012, but Lambey continues to perform at Rocco’s Italian Grille, as well as for special engagements. We will forever carry a torch for the way the enduring lounge singer lights up a room.

Asaan “Swamburger” Brooks
musician and artist
Equal parts promoter, label owner, hip-hop frontman and multitalented artist, Asaan “Swamburger” Brooks is all-around scene overseer. There’s little that gets by him that he hasn’t already leveraged (or laid plans to leverage) for inspired local events and sick parties. His band, Solillaquists of Sound, dominates Best of Orlando year after year for Best Hip-Hop (including this year, congrats!), and his label, Second Subject Recordings, spreads his honed skill and influence further to form a legitimate cultural movement that’s been swarming around Swam from his very first open mics hosted more than a decade ago.

Tiffany Roberts Sahaydak
head women’s soccer coach, University of Central Florida, ucfknights.com
If you needed another reason to be a fan of UCF’s athletics department, check this out: UCF is one of very few NCAA schools at which women are routinely hired as head coaches for women’s teams. Many schools choose men for those jobs, which is disconcerting to say the least. Not only is UCF bucking that trend, it’s also choosing some kickass women to lead other women to victory on the field. Tiffany Roberts Sahaydak, for instance, is a 1996 Olympic gold medal winner, a member of three World Cup squads and she’s won two NCAA championships. She is going into her third season coaching women’s soccer at UCF, and since she took over the program, the Knights have won three American Athletic Conference championships. Sahaydak is also a two-time AAC coach of the year – and she’s definitely a good sport, as evidenced by her willingness to play along with our royalty-themed photoshoot.

Peter Martinez
founder, Juice Orlando Bike Share, orlandobikeshare.com
We honestly had doubts that a bike share would ever really take off here – the Orlando area is nothing if not dedicated to its car culture. But this year, Juice Orlando Bike Share hit its stride. The bright-orange bikes are stationed all around Orlando, and the best part is that people are actually using them. Not a day goes by that we don’t see people pedaling along downtown on the sporty Juice cycles.

Best Kept Secret: A Mediocre Time With Tom and Dan

1. A Mediocre Time With Tom and Dan, tomanddan.com

Best Mound of Dirt: The leftovers of the round building at the Dr. Phillips Center

via Bungalower.com
When the love child of public-private partnership in the form of a new, world-class arts center for downtown Orlando was delivered, with it came a giant anthill of leftover debris from the demolition of the so-called “round building” that used to be located on the premises. The city had to dismiss Crusader Demolition (some say the organization walked off the job) after the company took forever to take the building down. Even after it was finally gone, the lovely Seneff Plaza hosted a giant hole and a pile of dirt where the building used to be – something even Sheryl Crow pointed out when she was in town for a free outdoor show there. A second company, Pece of Mind Disposal (seriously), was issued a new contract to remove the debris, a task that should be complete by the end of the year, according to the city, and should bank the city $129 million in “liquidated damages.” Molehills into mountains!

Best Guilty Pleasure: A Mediocre Time With Tom and Dan

1. A Mediocre Time With Tom and Dan, tomanddan.com

Rob Bartlett
It appeared in Lake Como Park in spring 2014 – a statue of a pink bunny perched on its haunches peering out at cars that drove around the east side of the traffic circle. Another bunny statue just like it appeared in Langford Park, as well.  The statues were erected by City Commissioner Patty Sheehan, who applied to have them installed in honor of her former aide, Chase Smith, who died of cancer in 2013. Smith played the Easter bunny for Easter egg hunts in both Como and Langford parks, and Sheehan thought it would be a nice way to honor his memory and his contributions to Orlando. But earlier this year, some residents living on the circle started complaining about the statue and insisted that it didn’t belong. Sheehan, who didn’t want her friend’s memorial tainted by negativity, made plans to move the bunny to a park in another neighborhood. But that’s when things got really interesting. Within 24 hours of posting to Facebook about her plans to relocate the bunny, a different group of neighbors chained the bunny to the ground, erected a “Save Our Bunny” sign behind the statue and asked Sheehan to reconsider. In the end, the bunny lovers defeated the bunny haters, and Chase Smith’s memorial stands in its original spot.

Carlos Amoedo
When the state’s battle against approving gay marriage finally broke down as a sort of New Year’s Miracle at the beginning of January, the city of Orlando set into motion a plan to make a pretty amazing spectacle by hosting a mass marriage ceremony right there, in broad daylight, on the steps of City Hall. Mayor Buddy Dyer and Commissioner Patty Sheehan headed up the ceremony, which went off without much of a hitch – one heckler was heckled back into silence – and we all lived happily ever after. Especially after the landmark Supreme Court decision this summer, which put a halt to the state-by-state bans and put a heart on the end of every tweet from the rooftops celebrating #LoveWins.

2. Pits Are Worth Saving, crossposting for bully breeds, facebook.com/pitsareworthsaving

3. Food Not Bombs, independent collective that serves vegan meals to the community, foodnotbombs.net