With the debut of Miami-based label The Smack Shire, three releases have been ushered out of the sometimes artful, sometimes sophomoric underbelly of the underground. The label's founder, Gerard Klauder, has been working closely with longtime pal and label curator Tom Smith (formerly of To Live and Shave in L.A.) to launch the imprint.

The first of these releases by the New York-based trio After That It's All Gravy, is "Band on the Run." As you might have guessed from the title, the album is a decidedly chic song-by-song remake of the 1973 Wings record of the same name. Depending on their view of the original slab, folks might find the treatment that album receives by ATIAG blasphemous, humorous or banal in its revisionist, knob-tweaking delirium. No matter the assessment, one can't help but wonder why artists, in such a rich and plentiful world of sounds from which to draw inspiration, continue to get off on postmodern appropriation or re-evaluation 20 years after the deconstructionist organ shot its academic wad. To say this release is an esoteric in-joke is simply an understatement. Talent is wasted all the way around. It's a shame. 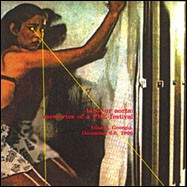 However, after that, it truly is all gravy. Recovering from that out-of-the-gate stumbling, The Smack Shire delivers two varied and solid discs. The compilation "Tarot or Aorta: Memories of a PRE Festival," documents the "Tora! Tora! Tora! Festival" held in December 1996 at Atlanta's late, lamented venue, Dottie's. The blowout was a testament to the filth and fury fermenting beneath the stagnant waters of the mainstream. Though the document tends to be uneven, sporting a rough and hurried job of editing, it distills the essence of the event. Standouts include the entertaining babble of Bobby Conn, Orlando's own Obliterati (here teamed with Simeon of Silver Apples), the grotesque strings of Alva, and the zoned virtuosity of Davey Williams and LaDonna Smith. There are disappointments. Seven years later, with only the sound to go by, one has to wonder exactly what was going on when The Flying Luttenbachers took the stage, and their tracks epitomize the choppiness of the CD. Still, one might surmise that this coarse construction lends itself to the chaotic, avant-punk and no-wave atmosphere shelled out relentlessly at Dottie's on those nights. Either way, there's something here for all fans of outsider music and atavistic squawk.
click to enlarge

"The Reverend Lester Knox of Tifton, Georgia: Put Your Face in Gwod: The 366th Revival," the centerpiece of the label, is a stunning chronicle of a man obsessed. As the saying goes, you just can't make this stuff up. Knox assaulted the airwaves of South Georgia for decades, spewing his unique brand of evangelism via broke-down song and fiery sermon. The results are as anthropologically curious as the music is primitive. Seriously, under these circumstances Jad Fair should be a de facto member of King Crimson. While the jokes could spill forth like goat's blood, there's an honesty in these recordings that might induce shame in the most callous ridiculer. It's a rare quality, and if it was missed on the other discs of this imprint, it is embraced here.

If somewhat shaky, these three discs represent a solid and promising inauguration for The Smack Shire. Perhaps the Gravy folks should take on "Two Out of Three Ain't Bad" for their next outing. Or, on second thought, perhaps they shouldn't.