Remix: a fresh take on a classic cocktail 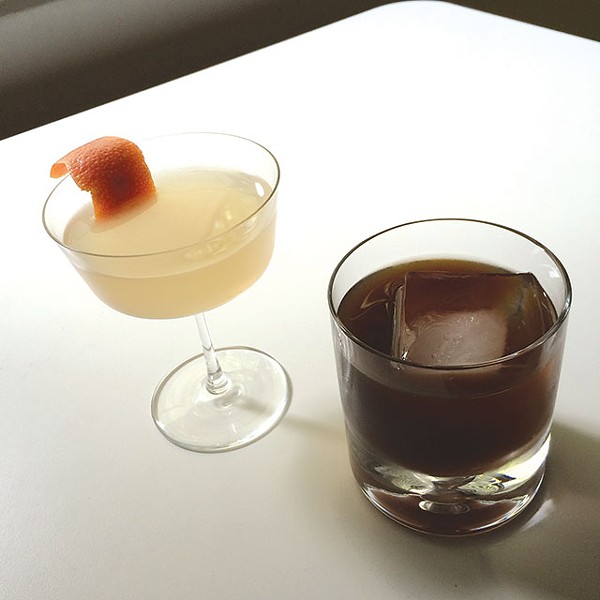 Point in favor of taking on the daiquiri for this month’s Remix: It was created in Cuba, where they absolutely get how to craft a cocktail to beat steamy summer weather like ours. Point against: The classic daiquiri is inextricably linked with Ernest Hemingway, and I find Papa to be an old blowhard, if not a downright bully. However, my taste in literature was trumped by August’s current blast of humidity.

One thing about this drink, though: Like most of Hemingway’s oeuvre, it’s mighty white. Yes, it’s refreshing – another Cuban rum-and-lime classic – but I wanted to give it a bit more soul. After researching the many daiquiri variations already out there, I decided just one wouldn’t do, so I shook up a double daiquiri menu: one a slight update of the Hemingway daiquiri, the other a twist on the lesser-known Barbados Corn ’n’ Oil cocktail.

No, I’m not a huge Hemingway fan, but I have to admit the old man was a talented drinker. The Hemingway daiquiri, usually credited to barman Constantino Ribalaigua of Havana’s La Floridita, is indubitably a step up from the basic, featuring mixed citrus juices, maraschino liqueur, and a revolutionary technique – Ribalaigua shook the drink with shaved ice, approximating the “frozen drink” texture that later caused the frozen daiquiri to become a candy-colored adult Slurpee. I’ve tweaked it just a bit more by using rhum agricole, a sugarcane rum with an earthy, fresh-fermented vibe, and adding a float of champagne (a nod to another Hemingway favorite, the Death in the Afternoon cocktail). The result is still refined, but with a bit more of a wiggle than the original.

The other punch of this double-fisted daiquiri Remix is a concoction of molasses-thick blackstrap rum with a touch of falernum (a sweet mix of lime, almond and spices). Like the sweet Luxardo Maraschino in the first drink, using Velvet Falernum in place of some of the simple syrup adds alcoholic heft and depth of flavor, instead of just sweetness. A simple syrup of brown Demerara sugar adds still more funky low notes. This double daiquiri Remix hops off the air-conditioned barstool and tells you it’s OK to sweat. Get on up.

Shake all ingredients over ice until sugar is dissolved. Strain into a chilled coupe glass.

Pour all ingredients except champagne into an ice-filled shaker and shake. Strain into a chilled coupe glass, top with a float of champagne, and garnish with a wide strip of grapefruit peel.

Pour all ingredients into an ice-filled shaker and shake well. Strain into a chilled highball glass over a large piece of ice.