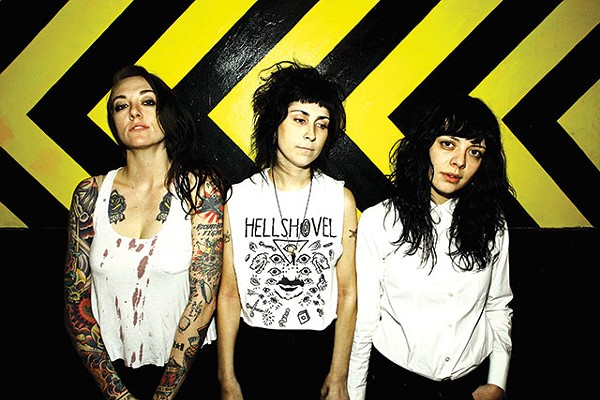 The Coathangers are going to Disney World – no, seriously. Atlanta’s most rambunctious lady punks purposely scheduled a day off in Orlando on their upcoming seven-date Florida mini-tour because guitarist-vocalist Julia Kugel (aka Crook Kid Coathanger) has never experienced Magic Kingdom’s joys.

“I told her she’s probably going to cry,” bassist-vocalist Meredith Franco (aka Minnie Coathanger) says. “We can’t wait to get back to Florida. The whole tour will be kind of a vacation.”

Kugel, Franco and drummer-vocalist Stephanie Luke (aka Rusty Coathanger) deserve it, too – their latest album, Suck My Shirt, which came out in March, is by far the band’s best in its nearly 10-year existence. Balancing raw immediacy with hard-won emotional depth and even a few sunny power-pop vibes, the Coathangers have performed that rarest of feats: evolving from amateurish, untrained musicians into accomplished performers and songwriters, all without losing sight of their hell-raising roots.

Franco cites two major differences between Suck My Shirt and its predecessor, Larceny and Old Lace: the ability to record at a leisurely pace at a hometown studio, the Living Room Recording, and trimming the Coathangers’ lineup down from four members to three.

“Without a keyboard, we had to find different ways to fill the songs in so they didn’t sound empty,” Franco says. “And since we weren’t rushing, we had plenty of time to figure all that out. It wasn’t as stressful.”

That effortless calm is best exemplified on the uber-cool groove of “Merry Go Round,” sung with yelping glee by Franco – but the Coathangers certainly haven’t gone soft, as evidenced by Luke’s barbed bellow on “Love ’Em and Leave ’Em.” Stunners like “Derek’s Song,” “I Wait” and “Zombie” all mine far more complex melodic and harmonic territory than anything in the band’s past repertoire.

“We still play our old songs live,” Franco says. “But Suck My Shirt is my favorite record. We just took a little break after our last two-month tour, but when we get back together we’re going to practice those new songs even more.”

If it all sounds like a far cry from the Coathangers’ sloppy beginnings, that’s because Kugel, Franco and Luke appreciate how far they’ve been able to come. They still work day jobs when they’re at home in Atlanta – “We’re just lucky that they let us take time off and come back from tour [to our] jobs,” Franco says. A solid management team led by Seattle’s Suicide Squeeze Records is in their dugout – of label founder David Dickenson, Franco says, “He’s one of our best friends … actually, like family.”

They also recently played their largest venues ever opening for internationally renowned garage-punks Black Lips. “The timing was perfect,” Franco says of the co-bill with their fellow Atlanta natives. “If we had toured with Black Lips before Larceny and Old Lace, we wouldn’t have been ready. This year, we felt confident and were excited to play the shows. Nervous at some of the shows because the venues were so big, but once we started playing, we felt fine.”

Even as the band’s recorded output has gotten considerably stronger, the band’s primal stomp and confident attitude still resonates best onstage. Franco says that if the Coathangers are going to continue to be described as an all-female band first, she hopes that approach will rub off on younger women in the audience.

“It’s nice to play with other women, although promoters do sometimes put us with other female bands even when we don’t go together, and that’s annoying. But it’s great to see girls in the audience and then have them come up to you afterwards and say, ‘I want to start a band now.’ Empowering women in that way is pretty awesome.”