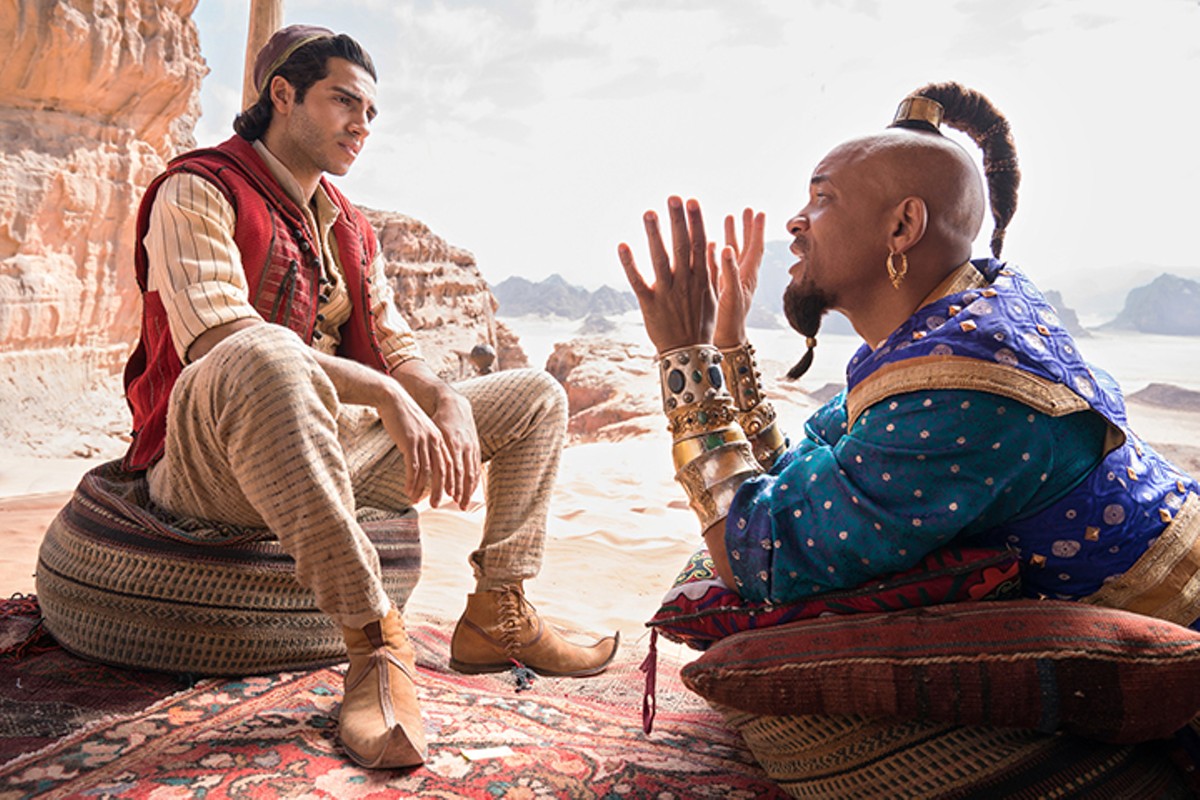 Mena Massoud and Will Smith in 'Aladdin'

“I can show you the world, shining, shimmering, splendid,” Aladdin sang in Disney’s 1992 hand-animated classic. Well, I guess that world wasn’t quite splendid enough, because here we go again with another unnecessary remake.

This one comes courtesy of writer-director Guy Ritchie, who is better known for – and better suited to – action and comedy. Admittedly, Aladdin has a lot of both, but at its heart it’s a musical adventure, with just the right balance of chuckles and pathos. And though Ritchie might have two smoking barrels in his toolkit, he apparently lacks tenderness. As a result, this remake is ill conceived, tonally challenged and heavy-handed, despite impressive production numbers.

As with all previous versions of the boy-meets-genie tale, this one is based on “Aladdin and the Magic Lamp,” a folk tale set roughly 1,000 years ago during the Islamic Golden Age. The story was first published in English in the early 18th century as part of a larger collection titled One Thousand and One Nights (or The Arabian Nights) and has seen countless film adaptations, starting with Aladdin and the Wonderful Lamp in 1917. But the Disney version from 27 years ago is now the most famous, thanks to its wonderful animation and memorable music by Alan Menken, Howard Ashman and Tim Rice.

Why Disney chose to redo the film is not a mystery. CEO Bob Iger and his team, like Aladdin himself, know treasure when they see it, and their strategy of redoing the company’s gems has brought them great riches. It’s also delivered some surprisingly good films, from Kenneth Branagh’s Cinderella to Jon Favreau’s Jungle Book to Bill Condon’s Beauty and the Beast to Rob Marshall’s Mary Poppins Returns (a sequel, not a remake). But those movies had a purpose and unique vision that separated them from their originals, and each was helmed by a director in tune with that vision. With Aladdin and the even worse Dumbo redo, though, Disney has become greedy. And Iger, like Abu the monkey, doesn’t know when to leave the treasure alone.

It didn’t have to be this way. A (mostly) live-action remake with ethnically authentic casting and culturally realistic design had the potential to take the story in new, dramatic directions. Replacing Gilbert Gottfried’s wisecracking Iago the parrot with the darker, more subtle performance of Disney veteran Alan Tudyk was a good move. So was giving Jasmine a new song, “Speechless.” But one good bird can’t give flight to an otherwise awkward, stiff and mostly unfunny film. And the poor quality and sandwiched-in feel of the new ditty means the movie, instead of giving greater voice to its female characters, appears to pander to feminism.

It’s finally time to mention the elephant in the room. He’s black, but he’s blue. He’s straight, but he plays his part embarrassingly, stereotypically gay. You know him. You love him (just not in this movie). Yes, it’s Will Smith as the genie. It’s impossible to top the snarky, frenzied charm of Robin Williams in the 1992 version, so why try? Instead, Disney should have re-imagined the genie, substituting whimsy for freneticism. As for Smith’s version, all I can say is please, Allah, make him go away.

With a genie rewrite and recasting, and sans Ritchie, the film might have succeeded. To its credit, it offers colorful CGI landscapes, cool practical stunts and electricity between Mena Massoud (Aladdin) and Naomi Scott (Jasmine). And with the spectacularly staged “One Jump Ahead” and “Prince Ali,” the film takes some stabs at quality. But its cinematic sword is blunt.

So, it would behoove you, Mr. Iger, to stop compromising the Disney legacy with unnecessary remakes. And on behalf of kids of all ages everywhere, I beg you: Stop fucking with our collective childhood.