Mouth from the south 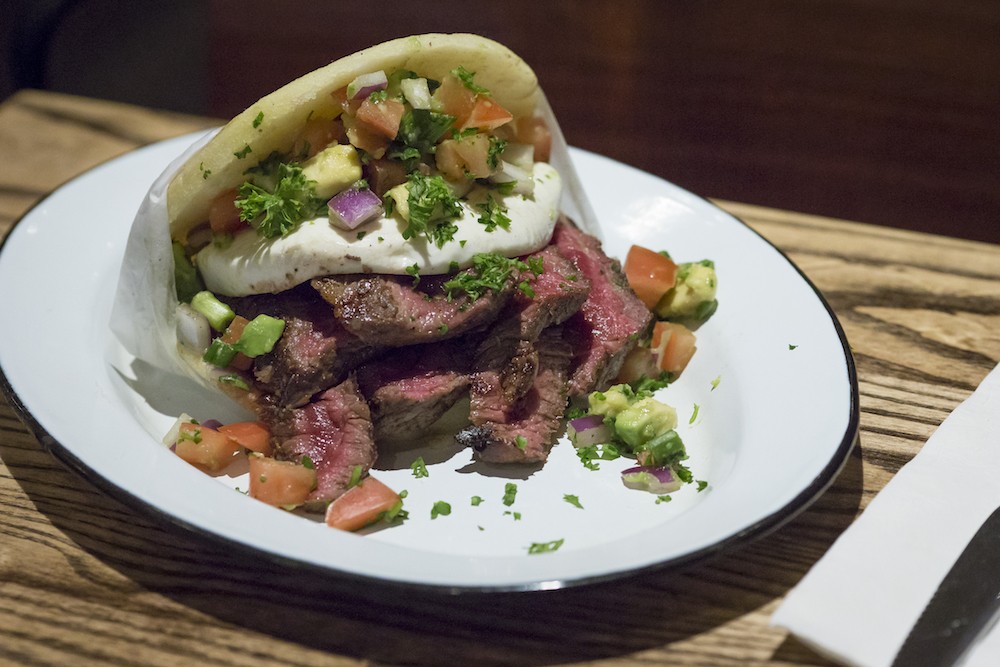 If you've come across a beverage in your social media feed that looks like a cross between Carmen Miranda and a Frosty, chances are it's one of the milkshakes served at Bocas Grill. A more towering quaff you likely never will see, and it's the unquestionable hook of this Miami-based pan-Latin outfit. But Bocas is more than just cloying gulps of dessert extravagance. Much more. For one, the restaurant's Venezuelan roots place the arepa front and center and, uhh, up on the wall, where a sprawling mural (rich in details of the griddled corn cake's history, yet somewhat lacking in linguistic translation) proves an amusing diversion.

But there's nothing amusing about the arepas here – they're seriously stuffed constructions, and none more so than the pabellón criollo ($10.50). The fillings – shredded beef, black beans and sweet plantains – comprise the holy trinity of Venezuela's national dish, all packed into an arepa (along with some white cheese). It's a glorious sandwich, all sweet, salty and meaty.

It's cheesy too, but not nearly as cheesy as the long rectangular plate of tostones with wok-smoked chicken ($13.50). The whole thing looks like a science experiment gone wrong – a goopy explosion of stringy white cheese and some indeterminate yellow sauce cascading over rounds of green plantains and chicken. You could barely discern the wokky essence in the pollo, but it was there. More so in the various "arroz al woks" – fried rice dishes akin to Peruvian chaufa. Soy-stained and sesame-oiled, the rice with plush carne ($14.50) is absolutely perfect. It holds up just fine for leftovers the following day as well.

If you want meat, the picanha (aka coulotte, aka top sirloin cap) is a fine bet. Two slabs for a mere $21, but sweet Simon Bolivar, that fat cap! It just melts away in your mouth and so easily makes its way into your bloodstream. A side of wok-fired veggies deluded us into thinking we were eating healthy, but the fried cassava could've done with a dusting of chile powder or a drizzle of lime. Plus, there were a few undercooked clunkers in the mix.

It should be noted that all of this food was delivered in one fell swoop. We sipped our cold passion fruit ($4.50) and guanabana ($4.50) juices until almost empty, then waited and wondered why our food was taking so long to show up as we watched the restaurant fill to capacity.

Just as the music decibeled to a higher volume, WHAM, four heaping plates were laid before us. We waited a while again for dessert and coffee, but it was damn well worth it. The torta tres leches ($9), a ridiculous presentation of the three-milks cake served with a vanilla ice cream cone and a syringe filled with condensed milk, one-ups their crazy-ass milkshakes. Be still my beating (for now) heart. Oh, and they brew a fine macchiato ($3) and colada ($2.50), courtesy of the sweet Faema E71 machine sitting at the back of the restaurant.

By the way, if you were a regular at the restaurant's predecessor – the charmingly Old World Bistro CloClo – the space, you should know, has been thoroughly deformalized. At Bocas, we couldn't help but feel as though we were dining in Brickell or Coconut Grove. Certainly, the clientele, a majority of whom are native Spanish speakers, feeds the sentiment, and feed we did.

In fact, we put our money where Bocas' mouth is.