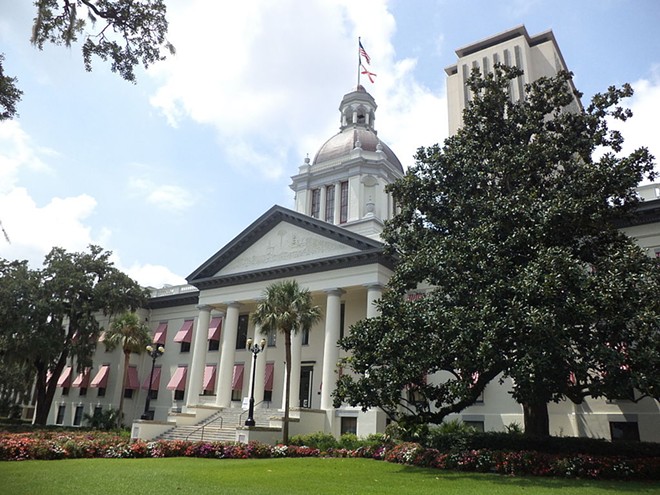 Photo by Michael Rivera via Wikimedia Commons
Kentucky's speaker of the House resigned from his leadership post amid reports he had secretly settled a staff member's sexual-harassment claims.

A state senator from Illinois stepped down from his spot as the leader of the Democratic caucus after a victim rights advocate accused him of sexually harassing her.

The Florida Capitol is one of at least a half-dozen statehouses forced to confront a culture of women being mistreated or even abused by men in power in the wake of news reports sparked by revelations about Hollywood movie mogul Harvey Weinstein.

A high-ranking Florida Democratic senator resigned from his post late last month after admitting he had an extramarital affair with a lobbyist.

On Monday, Sen. Jack Latvala, a Clearwater Republican who is running for governor, was stripped of his post as the powerful budget chief amid an investigation into allegations of sexual harassment and misconduct made by six unidentified women, who accused Latvala of groping them and making unwelcome comments about their bodies.

Now, a handful of women legislators want to change Florida ethics laws to make it a crime for elected officials to coerce someone into having sex in exchange for official acts, in the same way that it's off-limits for officials to accept other kinds of gifts.

State law prohibits solicitation and acceptance of gifts by elected officials, but “never mentions sexual harassment or assault or abuse of power of any kind related to withholding political power or exercising it in exchange for sex,” said Sen. Lauren Book, a Plantation Democrat who's leading the charge for the legislation.

“I went back to double-check, to make sure. Nothing. Nowhere,” she said.

Book said her proposal, still in the works, would treat “coercion of sex for official action as a crime, no less than taking tickets to a sporting event.”

Senate President Joe Negron wouldn't comment on the proposal because he hadn't spoken with Book about it yet, Negron spokeswoman Katie Betta said in an email.

“That being said, President Negron agrees with Senator Book that relationships between elected officials and lobbyists should be professional and appropriate,” Betta said.

Book and another Broward County Democrat, Rep. Kristin Jacobs, have teamed up on the framework for a task force to address the once-hidden issue of sexual harassment and misconduct, which some women who work in the legislative process contend is part of the cost of doing business in Tallahassee.

The task force would meet three times and present its recommendations to legislative leaders in 2019, Book and Jacobs said in interviews.

Book also wants an independent entity to handle probes of alleged sexual misconduct, something now handled internally by the Senate or by the Office of Legislative Affairs.

Referring to the book “Lean In,” by Sheryl Sandberg and Nell Scovell, Book said lawmakers need to “lean into the discomfort because it means we're growing.”

Negron ordered an independent inquiry into the allegations against Latvala, but only after Dawn Roberts, the Senate's chief lawyer whom Negron originally assigned to lead the investigation, asked to be taken off the case because she had lengthy professional ties to Latvala.

Jacobs, who served on the Broward County commission before being elected to the state House in 2014, said she's served on plenty of task forces whose recommendations were ultimately adopted as well as others whose suggestions were ignored.

“So there is always a risk, when you stand up to do something and evoke change, that those from whom you're seeking change are just not going to accept it or act on it. Period. But I don't think that means that you don't do it,” Jacobs, D-Coconut Creek, said.

Many officials —- including Attorney General Pam Bondi —- are encouraging people who've been subjected to sexual harassment or mistreatment to come forward and report abuse.

Bondi on Tuesday told reporters that the women who've accused Latvala of wrongdoing should identify themselves.

But Jacobs said most victims may prefer to remain in the shadows for a variety of reasons —- including fear of losing their jobs, retaliation from powerful men or public shaming —- even when they receive promises that their complaints will be treated confidentially.

“There's this illusion that you're safe. We're going to create this environment where you can come out and you can be safe. Whether that's true or not, I don't believe it's true. I don't think you're safe when you say (something), but I don't think keeping it shielded is the right way to go, either. But somewhere in this process, we ought to be talking about what other options you also have to deal with this something that's happened to you. And it doesn't necessarily mean you go running around to go tell everybody else. It may mean that in your particular case, it works better for you to handle it directly with the person who's done this. And if that's the case, what we all find ourselves, I included, saying to ourselves is, what should I do? What are all the ramifications of doing anything? What's the appropriate response?” Jacobs said.

She's hoping the task force, if created, would come up with guidelines for answers to those questions, and she envisions training similar to what lawmakers receive on issues such as how to deal with the media or how to file a bill.

With all of the current focus on sexual harassment and misconduct in Florida's capital city, Jacobs said she thinks it would be better to have the workshops after the task force makes its recommendations.

“It needs to be thoughtful and deliberative. It shouldn't be shoot-from-the-hip. And right now, the environment just feels so toxic that I don't think this is the best place to try to do that,” Jacobs said.