Your annual reminder not to wear blackface on Halloween 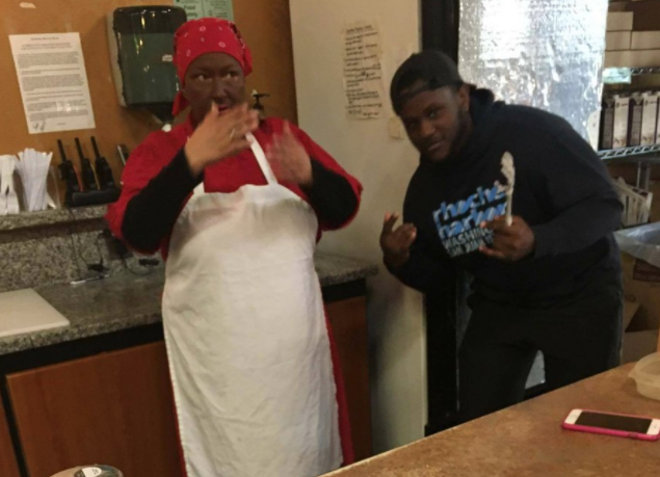 Photo via Brittany Donovan/Twitter
Protesters gathered outside a restaurant in St. Augustine this morning after photos surfaced of a white employee wearing blackface as a Halloween costume, which is something we apparently need to keep reminding people not to do.

According to WJAX, students from Flagler College began protesting outside the Bunnery Bakery & Cafe on Tuesday after the restaurant employee wore blackface to work.

Of course, the employee didn't mean to offend anyone and immediately washed it off after crowds started to form outside.

I suppose every year, till the end of time, we'll have to discuss that someone else's race isn't a costume, and even more specifically that blackface has an incredibly racially charged history.

Blackface dates back to the minstrel shows of the late 19th century, when white actors portrayed slaves and "free blacks" as complete buffoons. In fact, blackface is so deeply rooted in American racism that the term Jim Crow actually comes from an 1832 blackface minstrel song by Thomas D. Rice.

Blackface is part of a history of dehumanization, of denied citizenship, and of efforts to excuse and justify state violence. From lynchings to mass incarceration, whites have utilized blackface (and the resulting dehumanization) as part of its moral and legal justification for violence. It is time to stop with the dismissive arguments those that describe these offensive acts as pranks, ignorance and youthful indiscretions. Blackface is never a neutral form of entertainment, but an incredibly loaded site for the production of damaging stereotypes...the same stereotypes that undergird individual and state violence, American racism, and a centuries worth of injustice.


So, in short, "PC culture" isn't ruining America; slavery, ignorance and racism is in fact much, much worse. Here's a handy guide to help you out:

Graphic via ryot.org
Until next year.