Photo via Nicholas Banos/Facebook
This 15-foot long beast was captured April 1 in the Florida Everglades
Over the past 5 months Florida snake hunters have caught and killed 500 invasive Burmese pythons, according to a recent report from the South Florida Water Management District.

"The speed with which hunters are finding and eliminating these destructive snakes showcases not only their dedication to the effort, but also the enormity of this invasive predator problem in the Everglades,"  said governing board chairman Dan O’Keefe in a statement. "Every one of these 500 snakes killed helps ensure the lives of hundreds of native species essential to the Everglades ecosystem." 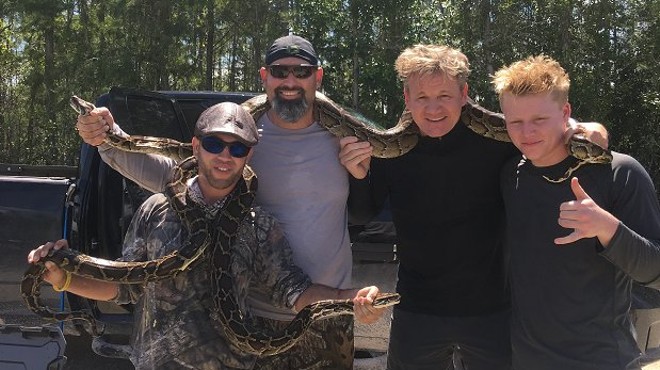 Here's a photo of Gordon Ramsay posing with Florida pythons, which he then cooked and ate

The state's first ever "snake hunters for hire" program was launched back in March, and has attracted quite a bit of attention. Last month, celebrity chef Gordon Ramsay joined a hunt and caught, cooked and ate three large snakes for his show The F Word.