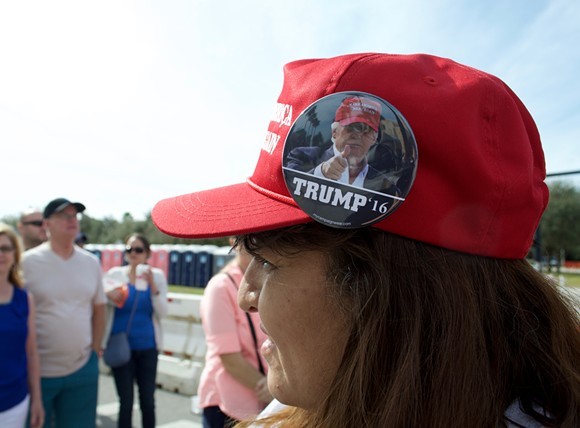 Photo by Monivette Cordeiro
A group with a history of anti-Muslim rhetoric and hate speech plans to hold a pro-Trump rally at Lake Eola this September.

The rally is organized by ACT for America, an organization founded by Hanah Kahwagi, who goes by the alias Brigitte Gabriel. The group's platform basically centers on stopping a perceived "threat" from Muslims in American society, which of course involves stifling the "political correctness" that tolerates them.

According to the Southern Poverty Law Center, ACT for America is the largest anti-Muslim group in America, and "has eagerly tapped into a groundswell of anti-Muslim rage and done what it could to fan the flames."

Much of the group's hate-filled narrative comes from Gabriel, who has a long history of conflating every Muslim as a terrorist.

While speaking to a Defense Department course on Islam in 2007, Gabriel preached that any practicing Muslim “cannot be a loyal citizen to the United States of America.”

In a 2008 op-ed, the New York Times Magazine called her "a radical Islamaphobe," writing, "Gabriel believes that Muslims cannot serve loyally in the U.S. military, that interfaith dialogue is 'nonsense,' and that the difference between the Arab world and Israel is “barbarism versus civilization."

It's easy to dismiss ACT for America as a fringe hate group, but Gabriel has strong ties to the Trump Administration and has made the most of it. Last March, she was invited to the White House with "open arms," reports The Atlantic.  Of course, she then bragged that "ACT for America has a direct line to Donald Trump, and has played a fundamental role in shaping his views and suggested policies with respect to radical Islam."

Orlando's event is part of series of rallies that will be simultaneously held across the country.