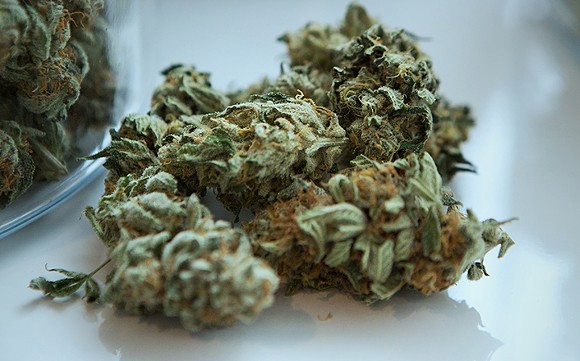 Photo by Get Budding
A Canadian-backed firm will take over management of Chestnut Hill Tree Farm, one of Florida's seven medical marijuana operators, the companies announced Wednesday. The deal involving Aphria Inc., a marijuana grower and processor based in Ontario, and Chestnut Hill comes on the verge of a massive expansion of Florida's medical-marijuana market, sparked by a November constitutional amendment that broadly legalized medical pot. Under the agreement, DFMMJ Investment LLC —- an entity wholly owned by Liberty Health Sciences, whose major investor is Aphria —- will “exclusively manage and operate Chestnut's cultivation, processing and dispensing of medical cannabis to patients” throughout Florida, according to an announcement released by the companies Wednesday. The management agreement, approved by the Florida Department of Health on Monday, also gives DFMMJ “the exclusive benefits of the finances of Chestnut's operation,” the announcement reads. The deal also marks Aphria's entree into the U.S. market. “For DFMMJ and eventually Liberty, this is an entry into an attractive market,” Vic Neufeld, Aphria's chief executive officer, said. “It is only the beginning for our plans to be a dominant player in the medical cannabis industry internationally.” DFMMJ plans to invest $20 million over the next year on “medical cannabis infrastructure,” according to Tallahassee lawyer John Lockwood, who represents Chestnut Hill as well as the newly formed management company. The money will be spent on dispensaries throughout the state, he said. Chestnut Hill is currently dispensing products to patients solely through home delivery. “Aphria has assembled an industry-leading management team, and I look forward to representing them as they immediately become a major player in the Florida marketplace,” Lockwood said in a telephone interview Wednesday. Chestnut Hill is embroiled in a legal battle with some of its earlier investors. The Alachua-based nursery filed a lawsuit last month against some of its initial investors over a dispute about the potential sale of the marijuana license to Aphria. That sale did not go through. The new deal does not include the transfer of the license or change Chestnut Hill's ownership, at least for now. But, anticipating changes to state regulations, the companies said they plan to eventually transfer the highly sought-after marijuana license from Chestnut Hill to DFMMJ, something that could be problematic under current Florida law. The new managers of the marijuana operation will be George Scorsis and Rene Gulliver. Scorsis, who previously served as president of Red Bull Canada, was president of Canadian-based marijuana company Mettrum Health Corp., which was purchased by Canopy Growth Corp. earlier this year for $430 million. Chestnut Hill's management agreement with DFMMJ comes as investors target other Florida marijuana operators in advance of what, with an estimated 420,000 patients, could be one of the country's largest medical marijuana markets. But it also comes amid questions about how the constitutional amendment, largely bankrolled by Orlando trial lawyer John Morgan, will be implemented. Morgan told The Miami Herald this week he was prepared to invest up to $100 million in Florida's medical marijuana industry. Lawmakers failed to approve new regulations for the marijuana industry during the regular session that ended May 8, prompting a bipartisan mix of legislators and other leading figures —- including Republican Agriculture Commissioner Adam Putnam, who is running for governor, and Democratic gubernatorial candidate Gwen Graham —- to call for a special session on the issue. A key sticking point for legislators has involved the number of dispensaries the state's medical marijuana operators would be able to run. The Senate wanted to put a cap of up to 15 retail outlets, while the House, which originally favored an unlimited number, wanted operators each to be able to run no less than 50 storefronts. The constitutional amendment, overwhelmingly approved by voters in November, gives the Department of Health until July 3 to come up with regulations, and until October to put the regulations into effect. Without guidance from the Legislature, it remains uncertain whether health officials will expand the number of operators in the state. Florida now has seven marijuana operators, but an administrative law judge on Tuesday called on health officials to issue two additional licenses.