The International Association of Amusement Parks and Attractions convention isn’t just a trade show, it’s a barometer for the state of the entire industry 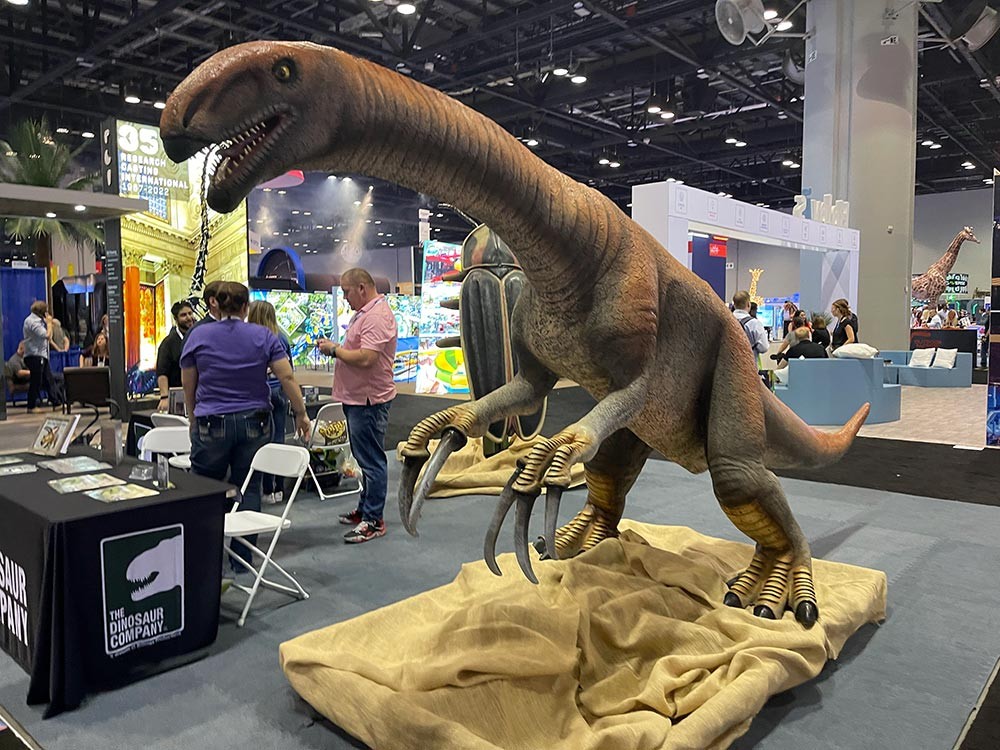 November's annual Orlando convention of the International Association of Amusement Parks and Attractions isn't just a ginormous trade show of carnival games and carousels; it's also an organic barometer for assessing the state of the entire theme park industry. After COVID canceled IAAPA in 2020, last year's Expo was an understandably scaled-back affair, with obvious empty areas in the formerly overflowing exhibit hall. The general mood then was of quiet, cautious optimism that the funpark business would eventually bounce back. But I don't think anyone expected the resurgence of exhibitors and attendees that saw the Orange County Convention Center bursting at the seams last week.

Perhaps it was just blissful, willful ignorance on the eve of an imminent inflation-pocalpyse, but the IAAPA Expo 2022 crowd (which exceeded 2021's attendance by 26 percent on the convention's opening day alone) was buzzing with more energy than I can ever remember, and the conference-goers' prevailing attitude seemed to be that consumer demand for immersive entertainment has returned to pre-pandemic levels. If true, that's great news for the vendors of everything from thrill rides to cow udder-themed condiment dispensers, which were among the thousands of novel products being demonstrated on the expo floor.

All the new rides, coasters and games we saw at IAAPA 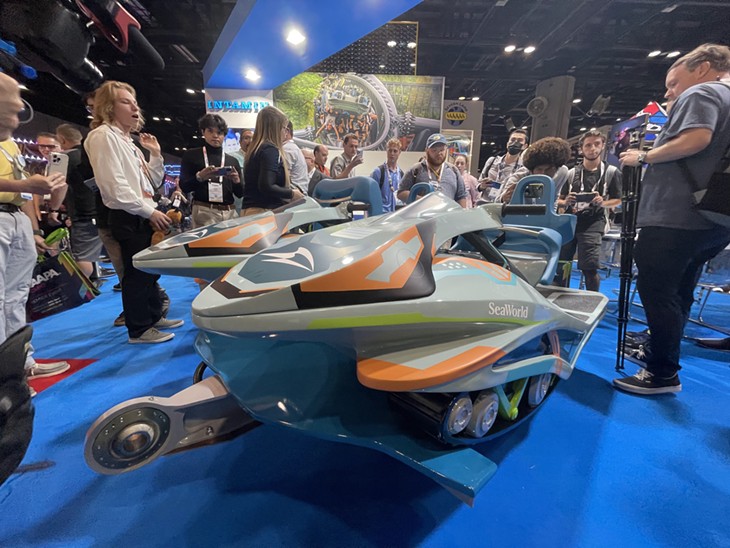 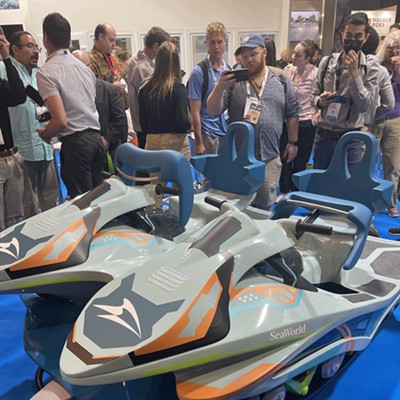 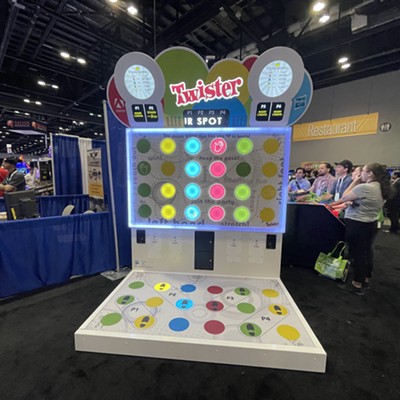 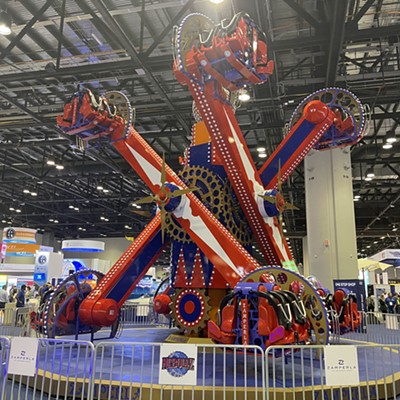 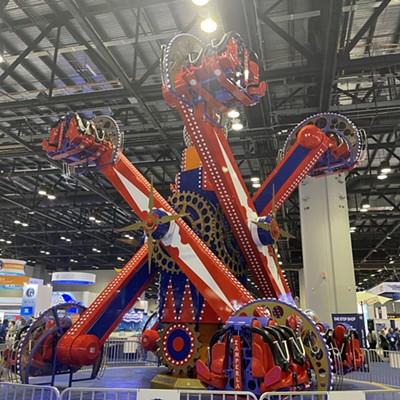 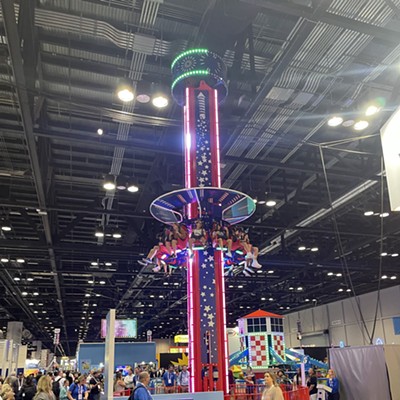 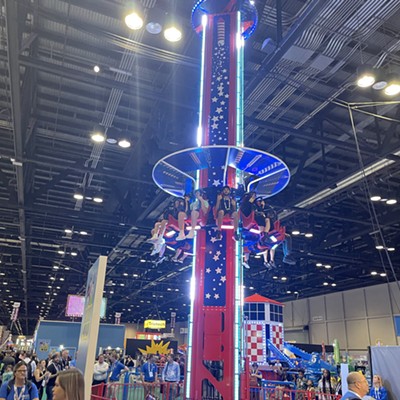 Here are a few IAAPA 2022 highlights that will hopefully show up someday soon at a theme park or family entertainment center near you:

— During the past decade, virtual reality in theme parks has seen explosive growth — fueled by a flowering of low-cost headsets, and further fanned by the drive for social distancing — followed by an even sharper fall-off, as consumers rejected pricey headache-inducing experiences of inconsistent quality. Now, newer devices with improved focus and field-of-view (like HTC's Vive Pro 2 and Focus 3) are finally living up to VR's promise.

The best IP-based VR experience I found at IAAPA was Hologate's Ghostbusters Academy, which lets four players strap on iconic proton packs and slay the Stay-Puft Marshmallow Man. The tethered equipment felt a bit too restrictive, but the visuals and audio were excellent. Another outfit to keep an eye on is Atlanta-based Megaverse, which has figured out how to network stand-alone headsets for wireless, free-roaming multiplayers; with a variety of original scenarios and 4D haptics like a moving floor, they could become a solid successor to my extinct former favorite, The Void.

— The era when every new roller coaster had to be the tallest and fastest in the world thankfully appears to have passed, but that doesn't mean the "coaster wars" are behind us. Rather, ride manufacturers seem to be focused more on aesthetic or engineering innovations that will attract thrill junkies without alienating the all-important family audience. Vekoma showed off the custom Jeep-inspired cars for Dollywood's Big Bear Mountain, and Rocky Mountain Construction unveiled the meow-tastic front train of Wildcat's Revenge for Hersheypark; both will bring a welcome touch of storytelling to their respective scream machines.

Even more cutting-edge was the Spike Fun prototype from Maurer Rides, featuring a rider-controlled seat that reclines up to 45 degrees, which should make for a unique perspective as you zip around its single-rail track. But the coaster reveal that really caught my attention was SeaWorld Orlando's surfing-themed Pipeline, a Bolliger & Mabillard stand-up model featuring a redesigned safety harness atop a gnarly-looking surfboard-shaped car. Hopefully it will prove less crotch-crushing than earlier standing coasters when it debuts next year.

— With modern game consoles and PCs providing home players with all the photorealistic graphics they could ever want without the need to pump quarters into a coin-op, arcade manufacturers are increasingly supplementing their catalogs of screen-based amusements with something even more amazing: actual reality. Following the resurgence of Pong and pinball in recent years, more mechanical arcade machines are appearing that appeal to Gen-X nostalgia, none more so than the supersized "Hungry Hungry Hippos," which had grown adults in business attire happily straddling marble-gobbling hippopotami. "Break the Plates" takes the classic sideshow scam and turns it into an invigorating athletic contest, where balls tossed at digital touchscreens cleverly trigger physical explosions of pottery shards. And despite having zero clue what I was doing, I still found myself transfixed by the flashing lights and snarky sound bites of "Rick & Morty's Blips & Chitz," the first-ever redemption game based on the acerbic animated series.

Finally, the high point of my IAAPA 2022 experience — aside from meeting Garner Holt's animatronic Grogu, who was even more adorable in person than he is onscreen — was Bob Rogers' annual Legends panel, which celebrated its 20th year with a deep dive into the past and future of EPCOT. Bob Weiss, the soon-to-retire global ambassador of Imagineering, drew laughs by admitting that the park's high-minded acronym also stands for "Every Person Comes Out Tired," and current vice president Kartika Rodriguez spoke movingly about making attractions more inclusive and accessible while remaining timeless. But it was Rogers himself — who produced World Showcase's classic Impressions de France film — who made the biggest impression by admitting he was "unqualified" and "undeserving" when initially hired by his mentor, the late Marty Sklar. I wish there were more creative companies out there willing to take a chance on the next generation of talent, instead of demanding "five years experience" for entry-level jobs.