Away in a manager 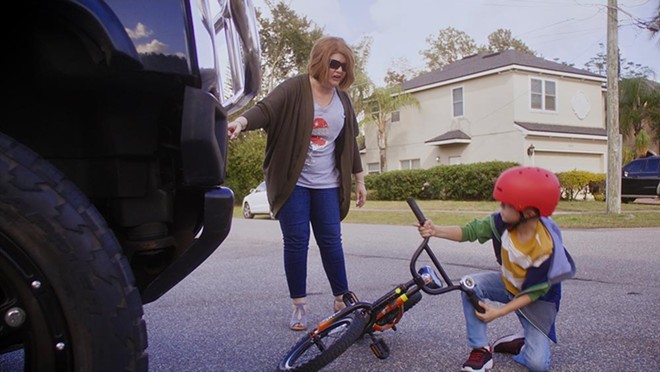 When it comes to comedy, some of the sweetest fruit is hanging right there on the vine, waiting to be plucked. That's what Central Florida filmmakers Jon Binkowski and Lisa Enos Smith experienced last year, when Binkowski was helping his family put up their Dickens-themed holiday decorations. Binkowski's wife took one look at the endearingly over-the-top tableaux of scenes from A Christmas Carol and blurted out a malapropism for the ages.

"She just made an offhand comment," Binkowski says. "I think she may have said 'Carol' quickly and it sounded like 'Karen.' She said, "Hey, that would be funny: A Christmas Karen.' And I went ... 'LISA!'"

A simple slip of the tongue had given Binkowski and Enos Smith the blueprint for a high-concept feature: a modern-day retelling of A Christmas Carol, starring a textbook Karen who treats everyone around her like caramel macchiatos that need to be sent back.

The finished film arrives Friday on multiple platforms. As written by Binkowski and directed by himself and Enos Smith, A Christmas Karen is a fast-moving, take-no-prisoners exercise that knows its moment — and its environment. Set in Celebration (albeit filmed on location in Orlando and Kissimmee), the movie might not declare overtly that Central Florida is the Karen capital of the world, but it doesn't exactly shrink from the suggestion either.

"The fact that Florida is crazy, and that 'Florida man' exists, and Karens exist, makes Florida a perfectly logical place for this [story] to take place," Binkowski says. "So we took advantage of that."

Plus, he says, a diverse population is great for dramatic conflict: "We suffer from, and we also [revel] in, the fact that Florida is quite an equally balanced state between the personalities. In politics and everything else." (That's probably the nicest way possible to say "We're all at each other's throats," but hey! 'Tis the season.)

Setting the story here also allowed Binkowski and Enos Smith to shoot in a familiar environment, using resources they've come to rely on for more than a quarter-century in local entertainment. The core business of their company, Renaissance Entertainment, is generating stunt shows and other themed attractions for the parks. When their industry sector started relying on 3D film in the mid '90s, they had the chance to develop a whole new skill set. And producing their own movies seemed a logical place to apply it — especially after they were able to bring friends and family on board with an investor pitch that may have been the most honest in the history of the medium: "Who would like to lose $3,000 the fun way?"

Since then, they've released six full-length features of increasing successfulness, running the thematic gamut from comedy to horror. Their fifth, Because of Charley, was the opening-night offering at the 2021 Florida Film Festival. But while Charley was a high-minded comedy-drama that set the emotional struggles of a multiracial family against the backdrop of the titular 2004 hurricane, Karen is a different animal entirely. Bold and broadly drawn, it has enough insults for a Dean Martin roast. It's also more reliant on postproduction magic, which netted the movie an award for Best Visual Effects at last month's Orlando Film Festival. The top honor it earned there, though, was a Best Actress win for its "Karen" herself, Michelle Simms, who came out ahead of competitors with names like Jacqueline Bisset, Sherilyn Fenn and Vivica A. Fox.

Simms is well-known to Orlando audiences as one of the nimblest comic minds our area has ever produced. She was once a mainstay of the Disney/Sleuths/Orlando Fringe circuit, where she was in demand for her knowingly goofy personae and breathtaking ad libs. Since leaving Orlando for L.A. in 2013, she's written and performed the solo shows "Weapon of Mass Seduction" and "What Is Love?" Nationally, she's best recognized as the manic "Oversharing Mom" in the Carvana ads that played before 99 million sets of eyeballs during the Super Bowl, with another 23 million views and counting on YouTube.

Karen is Simms' fourth outing for Binkowski and Enos Smith. Yet finding her character, she says, took some doing:

"They just handed this awful woman to me. I wasn't sure how to crack the code to her at first. I knew the portrayal of her had to have heart somehow, and I thought about the notion that all humans act out of love or fear. So, I decided she was fearful of everything. She pushed everyone away because she was afraid they'd leave, only to be left alone anyhow.

"I also improvised a fart in one take, but they didn't keep it."

Not just a vehicle for Simms, the film boasts supporting performances and cameos by a multitude of local favorites. Meghan Colleen Moroney has a barn-burning turn as the movie's Jacob Marley stand-in, a former boss of Karen's who taught her the ways of the perpetual kvetch. Some group scenes play like a running game of "spot the SAKtor" — no surprise given Enos Smith's own background.

"I myself was an improviser at SAK many, many years ago," she says. "And those are such kindred spirits to me that every movie we've done, we've tried to bring in performers from that environment. Because we love to add improvisation. It adds so much."

Maybe the best thing about the movie is that it doesn't shy away from the inherent racism and generalized fear of the other that undergird Karen-ism. Its title character is a hard-core bigot and homophobe who hates having to go to the Hispanic grocery for wine because nothing else is open on Christmas Eve — a holiday she could do without in the first place. And if that Dickens-mandated distaste for making merry is somewhat hard to work into a modern-day context — most Karens, one suspects, would outwardly profess to love Christmas — the film still manages to pull it off. Reclaiming the spirit of the season as profoundly compassionate and foursquare for tolerance, A Christmas Karen just might be the anti-anti-woke sermon we all need right now.

"Put Charles Dickens' story aside, and it's still so relevant," Enos Smith says. "Does Karen deserve to be saved? Does she deserve a second chance? Karen gets redemption despite the fact that maybe she's not real worthy of it. I think that kind of gives us hope."