Most Americans haven’t figured out — or worse, don’t care — which party intends to weaken them more 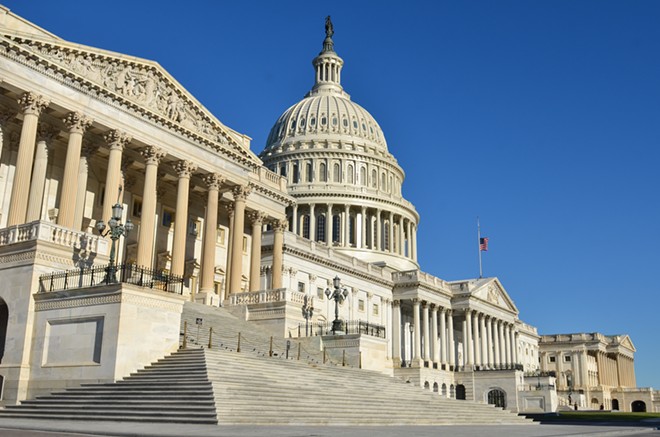 In one of the two competitive North Carolina congressional districts — to take that state as a representative example — the Republican candidate is an election-denying conspiracy theorist who called for the “trails [sic] and executions” of the “traitors” who denied Donald Trump a second term. (Two of her ex-husbands have accused her of spousal violence, and in 2012, her then-teenage daughter accused her of child abuse.) In the other, a 27-year-old ex-jock with a rich daddy and millions in Club for Growth support who says he was “inspired” by the Jan. 6 seditionists and wants to subject survivors of rape and incest to local star chambers to assess their worthiness for abortion access.

Meanwhile, the state’s Republican legislative leaders are pushing the U.S. Supreme Court to adopt the radical independent state legislature theory, which would enable them — and Republican lawmakers everywhere — to bypass annoying state constitutions on issues like gerrymandering and voter suppression. The Republican lieutenant governor (and likely gubernatorial nominee) wants to stop teaching elementary school kids history and science because they’re too woke or whatever, has posted Paul Pelosi conspiracies on Facebook, and has viciously attacked LGBTQ people as “filth.”

The state’s Democrats have gone in the opposite direction. The popular governor is of the aw-shucks centrist variety. His heir apparent, the attorney general, has tried (not as successfully) to be equally inoffensive. Even Democratic voters in deep-blue congressional districts picked moderates over their more progressive competitors in their primaries.

Yet in a recent survey, the state’s voters said that Democrats (36 percent) were just as extreme as Republicans (36 percent).

Last week, I wrote that the U.S. institutions were not equipped to handle political violence. Mostly, that’s because we don’t know how to deal with extremism — in particular, asymmetric extremism that has both grown from and reinforced networks of misinformation that have convinced millions of people that up is down and water falling from the sky doesn’t mean it’s raining.

ProPublica reported on Nov. 1 that the Biden administration had hollowed out an effort to counter online disinformation amid complaints from Republicans and right-wing propagandists who, strangely, didn’t want to see their agitprop and conspiracy theories challenged. The Department of Homeland Security has deep-sixed the (poorly named) Disinformation Governance Board and ended a program to protect election workers. A DHS official told ProPublica that “scrutiny is over the top on anything to do with terrorism, extremism, violence prevention — especially domestic terrorism.”

A former DHS official added, “The answer is not how do we do it better; in the face of criticism, it’s to shut it all down.”

What counts as “extreme” is subjective, of course. But most Republicans running for Congress or statewide office across the United States deny the validity of the 2020 elections — in other words, they reject an objective fact in favor of a repeatedly debunked conspiracy theory fomented by a would-be strongman who sought to overturn the results of a democratic election — which in my book is about as extreme as you get.

Few Republicans seem to agree, however: The latest NPR/Marist pre-election poll asked whether voters thought a candidate indulging stolen-election conspiracies was disqualifying. About two-thirds of Democrats indicated that it was; just 14 percent of Republicans said playing footsie with seditionists would prevent them from supporting a candidate.

President Joe Biden has tried to make threats to democracy central to the midterms. But in the Marist survey, just 26 percent of voters said “preserving democracy” was “top of mind” in the election; 36 percent said inflation.

In a sense, it’s hard to fault them. Democrats haven’t exactly acted like this is a hair-on-fire emergency. Would a party that really believed democracy was on the line back off misinformation campaigns the second they became inconvenient? Would they have backed radical Republican candidates they assumed would be easier to beat in November?

By a 50-27 margin, likely voters in the Marist poll thought Republicans would better handle inflation. A similar margin thought the same about crime. But Republicans have plans to address neither.

What they’ll do if they retake the House of Representatives is threaten to default on the country’s debt — thus imperiling global financial markets — to obtain inflationary tax cuts that help the rich or spending cuts that hurt the poor. They’ll perseverate on Democratic attempts to defund the police and hallucinate vivid images of big cities overrun by gun violence, but lord knows they won’t do anything about guns, which are sacrosanct. They’ll focus most of their attention on impeaching Joe Biden for high crimes (to be named later).

If this current Congress is dysfunctional, the one we’re about to elect will be an unmitigated clusterfuck.

Certainly, the media bears some blame. Horse-race coverage and the false god of objectivity have legitimized unqualified candidates and memory-holed Republican failures. Shameless propaganda and hysteria — rainbow fentanyl, anyone? — have convinced almost 70 percent of Americans that we’re experiencing an apocalyptic crime surge when, in fact, violent crime is down 29 percent since 2018 and 79 percent since 1993.

As journalist Robert Draper recently said, “The infractions that take place in each party simply aren’t comparable at this point. When we’ve come to a situation when tens of millions of Republican voters believe fundamental untruths about our elections and about Jan. 6, about COVID vaccines, and when the majority of Republican candidates for high office believe the election was stolen — when that’s the situation, it seems like a dereliction of journalistic responsibility to somehow shade that phenomenon as an inevitability in politics that both parties engage in.”

But authoritarian appeals resonate because they offer deceptively simple solutions to messy problems. The democratic institutions that safeguard us from unbridled populism are weaker than ever. And, if polls are correct, most Americans haven’t figured out — or worse, don’t care — which party intends to weaken them further.