Unlike the 2019 frenzy, the current Orlando engagement of 'Hamilton' has plenty of seats available 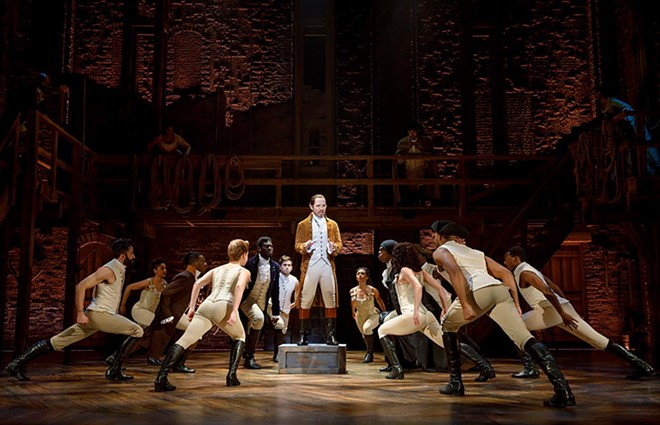 Photo by Joan-Marcus
'Hamilton' is currently running at the Dr. Phillips Center

When Hamilton first toured to Orlando in early 2019, the entire town was buzzing about the Broadway phenomenon’s arrival at the brand-new Dr. Phillips Center, and the scramble to secure tickets was the hottest topic among our arts community for weeks. Well, what a difference a few years and a global pandemic can make, because the current month-long engagement of Lin-Manuel Miranda’s revolutionary musical still has seats available at a variety of pricing levels, and my social media feed has been filled with friends trying to unload their tickets at face value.


Perhaps former fans have found the show less palatable after re-evaluating Alexander Hamilton’s real-life record regarding slavery and populism; or overexposure of the filmed original production (and Miranda himself) by Disney has dulled its luster; or maybe it’s just inflation-driven economic uncertainty.

Whatever the reason, it isn’t necessarily a bad thing to be able to experience this Tony-winning milestone without all the mishegas it inspired at the peak of its popularity. Lower demand also means that the Dr. Phillips (with the support of donors, the city of Orlando and Orange County) has been able to treat more than 1,200 community members — including Title 1 school groups, first responders and veterans — to free performances. And a downturn in pop-culture dominance didn’t make me any less eager to revisit one of my favorite shows from the past decade in person, despite having watched and listened to it digitally dozens of times.

But a funny thing happened on my way to Weehawken. Hamilton’s “Angelica” tour is physically identical to the “Philip” tour that previously visited Orlando, so all the praise I heaped on David Korins’ rough-hewn set and Howell Binkley’s painterly lighting in 2019 still applies. And from my second-row seat I gained a much greater appreciation for Paul Tazewell’s richly textured costumes (as well as a good view up the performers’ nostrils). However, despite enjoying the visual and sonic spectacle just as much as before, certain moments that always make me choke up every time I watch the film or listen to the original cast album, instead elicited absolutely no emotional reaction in me this time.

Why did I exit this Hamilton appreciative and entertained, but entirely dry-eyed? That may be a question for my therapist, but I think it had something to do with this touring company’s artistic interpretation of the two main characters. Please don’t misunderstand me; Edred Utomi and Josh Tower — as the titular Founding Father without a father and his mortal frenemy, Aaron Burr — both hit all their marks within this complex machine of a show with precision, and they fill the ginormous shoes of their predecessors in the area that matters most: articulating Miranda’s rapid-fire rap lyrics with intelligible diction, a fiendishly difficult task that nearly the entire cast achieves with aplomb.

What was missing, in my opinion, was the essential internal energy that animates each of these characters. We are repeatedly reminded that Alexander Hamilton was a relentless striver, but from his first entrance Utomi projects a laid-back vibe that almost reads as reticence. I sometimes thought the tempo had been slowed down slightly, because his relaxed patter often lingers just behind the beat rather than leading it like Miranda. On the flip side, Burr is defined in the text by his charisma and intense internal discipline, traits devilishly embodied by Nik Walker during the 2019 tour. Tower’s broader externalized gestures and exaggerated eyerolls, however, make Burr appear whiny rather than wronged, becoming distractingly reminiscent of Keegan-Michael Key in Schmigadoon! As a result, the deadly rivalry between them never resonated viscerally with me on this viewing, leaving only the line “duels are stupid and immature” ringing true.

All of the blame for my halfhearted bravos doesn’t land on the leads’ shoulders, because the real culprit is Thomas Kail’s justly acclaimed original direction, which must be both a blessing and a curse for a long-running road company to maintain. With such a multitude of moving parts — including turntables within turntables, flying catwalks and the ever-spinning ensemble — it’s amazing how little has been lost in translation since the original Broadway production, at least on a technical level. But even when all the elements are still intact, it’s the tiny subtleties that matter, and some of those have been blurred badly through repetition. Most crucially, the play’s final moment featuring Eliza Hamilton (understudy Cherry Torres at my performance) was once breathtakingly ineffable, but has now become overplayed to the point of being cringey.

After all this kvetching, it may seem strange that I still recommend you see Hamilton while it’s here. But even with my super-fan nitpicking, I still found plenty to enjoy in this production, starting with the note-perfect 10-member pit orchestra, conducted by keyboardist Kat Sherrell. Andy Blankenbuehler’s modern dance–meets–hip hop choreography has held up remarkably well, and I delighted in spotting subtle background movements that you miss on video. Portraying Thomas Jefferson and Lafayette, David Park has impressively limber limbs and lips and captures his characters’ outsize egos without duplicating Daveed Diggs, while Peter Matthew Smith makes the most of his comic cameo as King George.

Most especially, this tour is a tribute to the importance of understudies and swings, who filled more roles than I can ever remember on a major show’s media night. Sometimes stand-ins can cause an aesthetic imbalance; for instance, Neptune, standing in for Carvens Lissaint as George Washington, has a great voice but looks too young to project the gravitas the role requires. But more often, they rise to the occasion and shine, as Tampa native Deejay Young did as Hercules Mulligan and James Madison. It may not hit home with me the way it once did, but as long as Hamilton keeps offering opportunities to emerging talents, then I hope it keeps running for a hundred years.
© 2023 Orlando Weekly