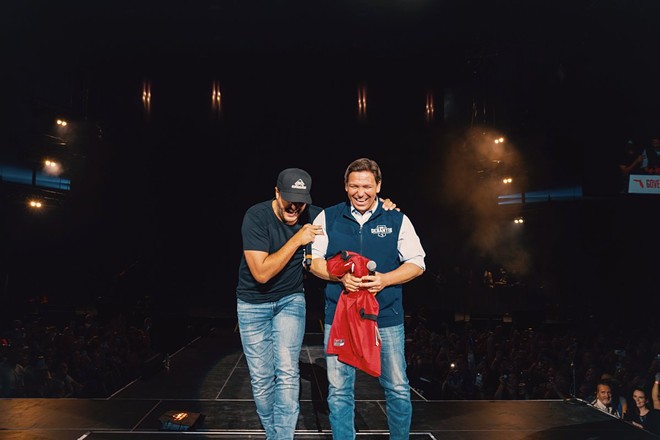 Country fan favorite Luke Bryan is defending his decision to bring Florida Gov. Ron DeSantis to one of his shows on Friday, despite the backlash he received on social media.

Video of the Jacksonville concert shows Bryan telling his fans that they were going to “have some fun” and “raise some money tonight for the great state of Florida.” The money raised is in reference to the proceeds going towards the Florida Disaster Fund that is helping those impacted by Hurricane Ian. Bryan then brought out the controversial Jax-born governor.

Bryan issued a statement on his Twitter defending his decision to provide a platform for DeSantis at his show in Florida, saying he “generally stayed out of politics” but wanted to help “raise awareness” and support those impacted by a natural disaster.

"I typically don't respond to stuff when I'm getting run down on a social platform but here's the deal," Bryan wrote. "I understand Governor DeSantis is a very polarizing figure. But I grew up in a country where if a governor (asks) you if they can come and raise awareness to help victims of a natural disaster you help."

Bryan originally postponed his shows in September due to Hurricane Ian’s impact in Florida.

It’s no surprise that some Floridians are responding negatively to Bryan’s decision to bring DeSantis to his show as the Florida governor has  fueled an anti-LGBTQ panic, signed strict abortion bans and  flown Texas migrants to Martha’s Vineyard using state dollars.

DeSantis shared the photos of the two on stage to his Twitter, writing “Thanks for letting me crash the party last night @lukebryan!”