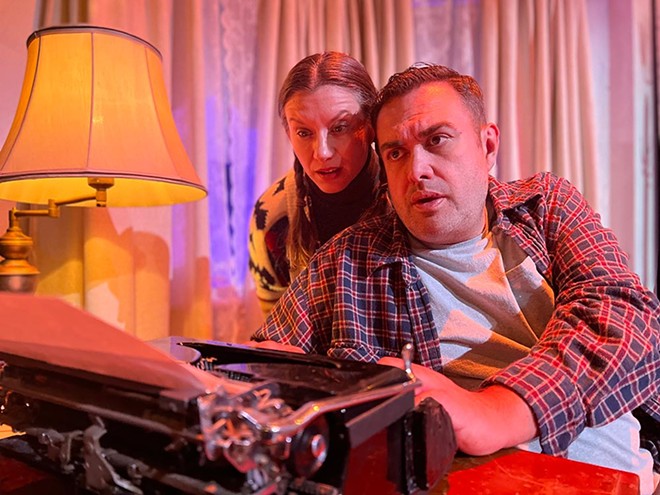 Calling all dirty birds. Cue up your Liberace records after your 45 of “The Monster Mash” is over, because if you play your cards right you’ll be spending Halloween weekend with Annie Wilkes and Paul Sheldon.

Orlando director Jeremy Seghers, well-known locally for his unconventional staging of the dark stuff — Dracula in a taxidermy shop, The Bacchae as drive-in theater — is bringing the characters of Misery, Stephen King’s chilling meditation on the relationship between audience and artist, to life this Halloween weekend. And he’ll be doing it in — gasp — a proper theatrical setting. What gives?


Well, let’s start at the beginning. King’s novel Misery came out in 1987 and made a big enough splash to be brought to life on the silver screen by Rob Reiner in 1990, with James Caan as writer Sheldon and Kathy Bates as obsessed fan Wilkes.

Wilkes rescues Sheldon, her favorite author, after a car accident and starts nursing him back to health. But things go increasingly haywire when she finds out that Wilkes has just killed off her favorite character, Misery Chastain, in his newest manuscript. And then things get really dark.

The movie was a tense, slow-burning masterstroke, netting Bates an Oscar. Misery would later be adapted for the stage by William Goldman, who had written the original screenplay, in 2015. Seghers, a committed fan ever since he “saw the film way too young,” duly made the pilgrimage to the Big Apple to witness this production.

“I saw the Broadway production with Laurie Metcalf and Bruce Willis,” says Seghers. “‘I thought, ‘Wow, it is possible to do this wrong.’ I didn’t love the performances, necessarily, but I did love the writing. And I loved how it kept the pace, even actually more so than the movie; it is very quickly paced.

“It’s basically a two-hander with the sheriff who comes in for a few scenes. I loved how quickly it moves. The transitions were really smooth and quick and very cinematic. I thought that I’d love to do this, but stay true to what I loved about Kathy Bates’ and James Caan’s interpretation, without trying to replicate it.”

Even though rights to staging Goldman’s reimagining were sewn up tight due to the use of Liberace’s music (an essential element), Seghers began idly musing on what he could do with this material.

“I wanted to cast actors that would bring something to it. That felt as authentic and empathetic and vulnerable as Kathy Bates and James Caan. I started writing a wishlist in my head: ‘I could do it like this.’ I started daydreaming and imagining, and I went to apply for the rights. This was maybe three or so years ago, and the rights were restricted.”

Finally the email came that the play was at last available, Seghers pitched it to his current homebase of Osceola Arts, and here we are today, with Seghers and the cast in the last rounds of rehearsals before opening this Friday.

Though the story is best known in its feature film form, Seghers’ Misery is staged emphatically as a play: minimal, bare-bones sets (all in the same house); a small cast of three major players (some incidental characters in the film got the ax); an emphasis on the claustrophobic and increasingly wracked interactions between the main characters. Not to mention the occasional bursts of wicked humor that break the almost unbearable tension as Wilkes unravels.

“If you have an audience that’s laughing one minute and then something happens that’s truly terrifying, it catches them off-guard,” says Seghers. “And I love horror with a little bit of camp.”

With his prize in hand, Seghers just had to find the right actors locally. It didn’t take long to find dual leads in Sarah Lockard and Stephen Lima, also a couple in real life.


“I love watching other people be scared. I will definitely be standing in the back of the house watching the reactions,” promises Seghers, “because that delights me more than anything.”

“Sarah Lockard and Stephen Lima are Orlando theater mainstays,” says Seghers. “They’re a couple and they’ve never worked together. When I started thinking about who I would like to cast, Sarah was the first person to come to mind. Not just because we’ve worked together several times, but because she is so genuinely caring and unthreatening. But also very direct. … She’s physically small, and Steve is a little bit bigger. And I wanted this idea, this underlying feeling that Paul could maybe take Annie down if he could just get out of that fucking bed.”

The dynamic of an actual couple playing this fractured and nightmarish vision of a couple, where one party is held hostage and tormented, makes for an intriguing dynamic.

“In Annie’s mind, they are a couple. She is very much in love with him. Although that love is misplaced,” explains Seghers. “Having an actual couple where that trust is already there is another thing to play off. … We have a wonderful fight director, Bill Warriner, who’s worked with them, but I think we’d already jumped that hurdle by them being so familiar with each other.”

Seghers paints a picture of Lima and Lockard memorizing lines together and the small cast even doing initial rehearsals at their home, a wholesome mirror image to Sheldon’s and Wilkes’ cabin fever. Rounding out the cast is Jeremy Wood as Sheriff Buster.

Because it is Seghers, there’s always a bit of a twist with the staging; this time it’s a turntable-style stage where sets rotate in and out to keep the flow of the action onstage continuous. For Seghers it was important to stage this play in a theater space.

“I thought about doing it in a site-specific setting, an actual house. But I think it just is so much more fluid and it just has so much more energy on a stage that can rotate,” says Seghers. He also promises a few more new tricks up his sleeve. “We use some special effects and some things that I’ve never used before. There’s fire, there’s pyrotechnics and there’s lots of blood.”

And if you happen to feel a shadowy presence in your periphery during the play, don’t fear, it’s just Seghers.

“I love watching other people be scared. I will definitely be standing in the back of the house watching the reactions,” promises Seghers, “because that delights me more than anything.”
© 2023 Orlando Weekly