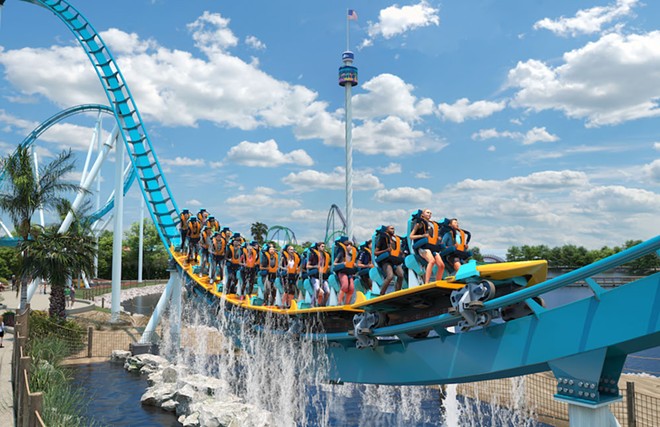 SeaWorld Orlando just announced plans for their newest roller coaster. Pipeline: The Surf Coaster is a standing, surf-themed roller coaster that is meant to mimic the feeling of riding a wave as it shoots upright riders along a track at speeds of up to 60 miles per hour.

According to a press release from the Orlando theme park, Pipeline features innovate "seats" that jostle riders up and down to mimic the feeling of riding on water as the coaster goes through turns and loops.

SeaWorld attendees will be riding giants when this coaster opens, as the track gets as high as 110 feet off the ground. Riders are expected to cover the nearly 3000 feet of track in under two minutes. 
"We are always looking for exciting ways to take thrills to a new level, said SeaWorld Orlando Park President Kyle Miller.  "This first-of-its-kind roller coaster will be the perfect addition to the already incredible lineup of attractions at SeaWorld Orlando."

When the coaster opens in spring 2023, it will be  the 7th at SeaWorld Orlando. It follows the opening of Ice Breaker earlier this year.
© 2023 Orlando Weekly