Howl-O-Scream vs. Halloween Horror Nights is shaping up to be this Halloween's scariest smackdown 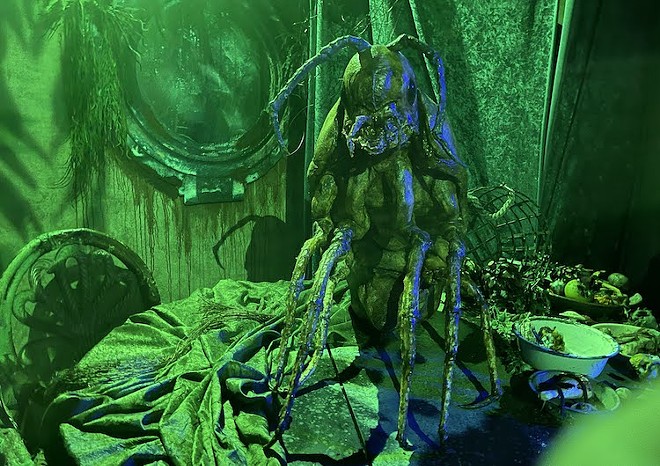 After over fifteen years of watching potential challengers to the dominance of Halloween Horror Nights falter, from Nights of Terror to Dark Harbor, I’m thrilled that one of Universal’s competitors has not only returned for a second season, but expanded with extra emphasis on the exact element HHN has been lacking of late. Forget about Freddy vs. Jason and Alien vs. Predator; Halloween Horror Nights vs. SeaWorld’s Howl-O-Scream might be the scariest match-up of all.

I’ve long had a love/hate relationship with Halloween Horror Nights, and my visit to HHN 31 on a rain-soaked Thursday last month mostly solidified my belief that the event is overdue for a shakeup. As always, I’m in awe of the scenic artistry that goes into Universal’s cinema-worthy haunted houses. This year, the bone-chilling Dead Man’s Pier topped my list for its evocative sense of scale and atmosphere, with the mid-century modernism-mocking Bugs: Eaten Alive coming in a close second.

However, although the original-concept houses are as imaginatively designed as ever (with the exception of the hasty-feeling Hellblock), the licensed intellectual properties HHN is famous for were uneven at best. While the Egyptian-set Legends Collide is Universal’s best Classic Monsters tribute to date, I preferred 2014’s Halloween to this year’s retread, and the Horrors of Blumhouse double feature won’t please or create fans of either film.

The bigger issue is not the designs of the haunts, but their inhabitants — or lack thereof. I frequently found long stretches in every house with absent entertainers, and counted more flashlight-waving operations employees than scareactors. When performers are present, they’ve largely been reduced to organic audio-animatronics, repeating their jump-scare motions to a looping soundtrack rather than genuinely interacting with the conga-line of guests shuffling by.

Likewise, as the scarezones have grown more aesthetically elaborate — the candy-themed parade floats in New York’s streets are works of art — they’ve devolved into selfie stations with few opportunities for actual frights. The returning Halloween Nightmare Fuel show still boasts fiery dancers, but the pyrotechnic effects and illusions didn’t wow me as much the second time around. Finally, the entertainment lineup’s best new addition in years — the lagoon’s delightfully old-school Ghoulish! fountain show — is currently on indefinite hiatus due to hurricane damage.

By attending HHN on an inclement off-peak evening, and using my annual pass to take advantage of “Stay & Scream” early access to several haunted houses, I experienced six of the 10 before 7 p.m., and finished them all by 11 p.m.. So I can’t personally complain about long waits. But woe be unto anyone who wanders in on a weekend to find triple-digit waits for The Weeknd’s walkthrough (which won’t make much sense unless you’ve watched all his “After Hours” music videos) and learns that expensive Express passes only cut the queue in half (if that). If you go and the crowds drive you to drink, duck out to CityWalk’s recently resurrected Dead Coconut Club for some classic crooning and cocktails with no cover charge.

If you seek an alternative to HHN, SeaWorld Orlando’s second year of Howl-O-Scream has increased its footprint in a credible bid to take a bite out of Universal’s market share. After years of attending Busch Gardens’ Howl-O-Scream, I had limited expectations for Orlando’s sister event, but 2021’s debut demonstrated potential that this HOS has begun to fulfill. To be certain, SeaWorld’s operations still pale in comparison to Universal’s, from confusion at parking and security, to insufficient maps and signage for navigating the labyrinthine fog-shrouded pathways. And HOS offers only five haunted houses — including the new Blood Beckoning and Siren of the Seas, which join the returning Beneath the Ice among my favorites — to HHN’s ten.

But despite lacking HHN’s lavish level of scenic detail, HOS’ haunts are generously long; experienced in small pulsed groups rather than a perpetual lane; and chock full of creepy characters that don’t merely shriek ad nauseam, but engage in unnerving conversations. As a result, I got far more good scares out of SeaWorld’s five houses than I did in all of Universal’s combined. Similarly, the props surrounding HOS’ seven scarezones may be simpler, but the large number of aggressive actors more than make up for it.

Even better in my book than the houses or zones are Howl-O-Scream’s expanded live shows, which enlist local talents from Imagination House, Odd-O-Ts and WeFlip Entertainment to provide spooky entertainment with a unique edge. The fearfully entertaining results include a rhythmic Jack the Ripper dance show with powerhouse vocalists; bars with salty Streetmo-style improv and overhead aerialists; and a lip-synch drag cabaret that’s well worth the extra fee to see.

The difference between HHN and HOS can even be seen in the food and beverage offerings. Both feature numerous festival booths serving sinister sweets and savories, but while Universal’s are placed randomly and have menu items that are terrifying in name only (“maggots” are really puffed rice), SeaWorld’s are tied to a neighboring show or house — which are in turn connected in an overarching “evil sea sirens” theme — and offer edible oddities like grasshopper-topped tacos. Halloween Horror Nights is still likely to reign for years to come, but if you’re exhausted by elbow-to-elbow crowds and looking for a better boo value, try howling and screaming over at SeaWorld instead this season.
© 2023 Orlando Weekly