Although one of the two monitored disturbances has upgraded into a depression, the NHC believes it is unlikely to grow much stronger. 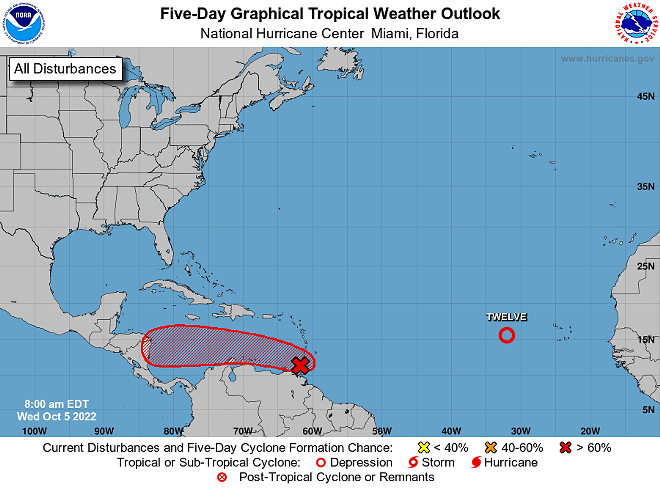 National Hurricane Center
The NHC expects Tropical Depression Twelve to fizzle out over the next three days.

Of the two tropical disturbances the National Hurricane Center has been monitoring this week, one has reached tropical depression status.

Tropical Depression Twelve, located in the eastern Atlantic, has a maximum sustained wind speed of 35 mph. According to the NHC's most recent public advisory, the depression is "barely hanging on as a tropical cyclone". The NHC's cone models show that the depression is expected to dissipate within three days.

The NHC is also watching a disturbance east of the Windward Islands, which has an 80% chance of cyclone formation in 5 days and a 60% chance over the next 48 hours. While the NHC reports no stronger organization from the system since yesterday, it is expected to develop into a depression over the next few days.

Despite formation status, the NHC said that heavy rain and potential flooding should be anticipated throughout the Windward Islands and Northern areas of South America.

You can continue to stay updated on storm development through the NHC website.
© 2023 Orlando Weekly