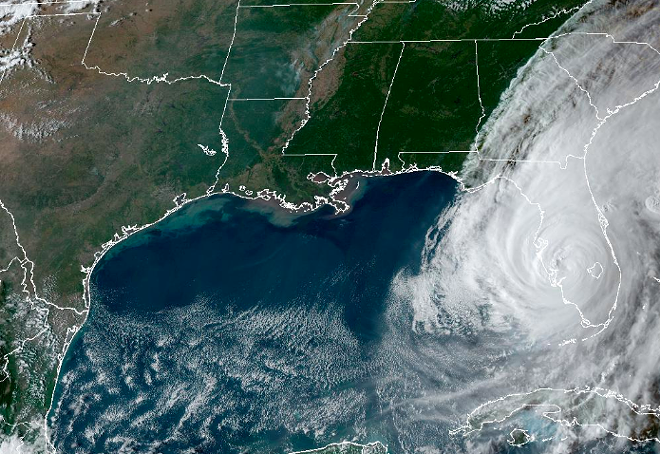 The near-Category 5 hurricane landed around Cayo Costa State Park at just after 3 p.m. After passing over the barrier island, it made landfall again at Punta Gorda after pushing through Charlotte Harbor. The NHC reported storm surge as high as 18 feet in the area.

Ian is still over 100 miles from Orlando, but moving in a northeasterly path that will carry it through the region.

The storm will likely be downgraded to a tropical storm or category 1 hurricane by the time it reaches the Orlando area. The slow-moving storm brings with it fears of flooding on top of the risk of wind damage.

Live webcams pointed at the ocean and other cameras in Southwest Florida captured the storm as it pushed the Gulf of Mexico into the streets. The Weather Channel shared a particularly frightening view of the storm surge from a camera that was close to ground-level in Fort Myers Beach.

*RARE* first person view of storm surge. This camera is 6 feet off the ground on Estero Blvd in Fort Myers Beach, FL. Not sure how much longer it keeps working. You’ll see it live only on ⁦@weatherchannel⁩ #Ian pic.twitter.com/WwHtvgVxjY

The worst effects of the storm are expected to reach Orlando and the southern metro area around 9 p.m., according to a forecast from meteorologist  Alex Alecci.
© 2023 Orlando Weekly