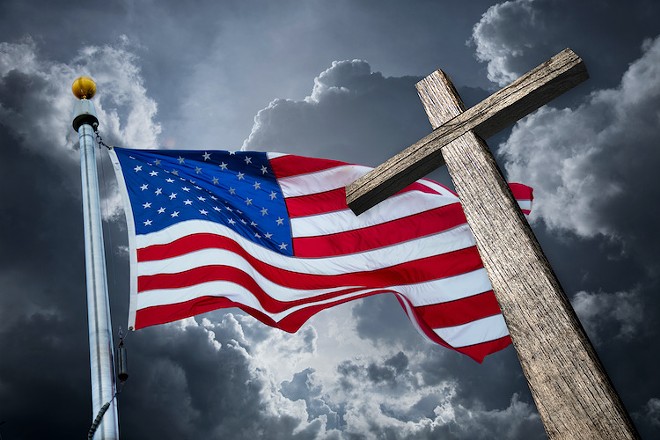 As a child, I attended a fundamentalist parochial school, one of those primarily white private schools founded in the South after the civil rights movement for reasons that, of course, had nothing to do with race; don’t be silly.

On the other hand, I — slow, short, not terribly coordinated, occasionally stoned — was a two-sport varsity athlete, so I suppose there’s an upside to everything.

In any event, the experience left me with a lifetime’s worth of the evangelical version of Catholic guilt and a strange fascination with fundamentalist politics.

I’ve watched with morbid curiosity as those who purported to be the only true followers of Jesus volunteered to be co-opted by a reactionary strain of American conservatism, as the same crowd that had fits of apoplexy over a president’s affair became loyal foot soldiers for a libertine con artist.

Psychologically, the attraction isn’t hard to explain: Fundamentalists and right-wing populists both score off the charts on measures of authoritarianism. Even so, it’s been interesting to see how the merger — which was underway since the mid-20th century but reached its zenith under the Trump administration — has affected both religion and politics.

Recently, Ligonier Ministries and LifeWay Research published their semi-annual “The State of Theology” survey, a poll that seeks to “take the theological temperature of the United States to help Christians better understand today’s culture and to equip the church with better insights for discipleship.”

Its findings were remarkable, especially coming from a fundamentalist organization.

“Despite the clear teaching of scripture,” the survey reported, nearly half of evangelical Christians said that God “learns and adapts to various situations.” Nearly two-thirds reject the notion of original sin, which the survey attributes to the “influence of humanistic philosophies and worldviews.” A majority — 56 percent — of evangelicals believe God accepts people of multiple faiths, up 14 points from the 2020 survey; 43 percent deny the divinity of Jesus, and 26 percent say the Bible isn’t literally true.

These are literal heresies for Christians who do not merely attend evangelical churches but espouse core evangelical beliefs.

But while evangelicals’ theological views have grown less fundamentalist, more than 90 percent of evangelicals still hold to fundamentalist teachings on abortion and sex outside of marriage. The percentages that see both as sins have risen in recent years, in fact.

At the same time, however, 28 percent of evangelicals say that the Bible’s condemnation of homosexuality no longer applies — not a lot, but way up from 11 percent in 2020 — and 37 percent agree that “gender identity is a choice,” up from 22 percent two years ago.

Younger evangelicals are significantly more liberal on those two questions, but not on abortion or premarital sex.

I’m not sure what to make of that dichotomy. Perhaps wider acceptance of and greater exposure to LGBTQ individuals has caused some evangelicals to rethink their adherence to Bronze Age understandings of human sexuality and gender, while a generation of True Love Waits shaming is still working its magic. Or it could be that evangelicals, like religion itself, are full of contradictions.

A recent Gallup poll found that only 81 percent of Americans said they believe in God, the lowest level in the survey’s history and down from 92 percent in 2011. Church attendance is collapsing. Increasing numbers of Americans say they have no religious affiliation — and millennials and Gen Zs are the least religious generations this country has ever seen.

It doesn’t take a prophet to see where this is headed.

It’s no coincidence that the once-fringe idea of Christian nationalism — the idea that the United States was founded as a Christian nation and the separation of church and state is a myth — is taking hold on the far right, with figures like Doug Mastriano, the Republican candidate for Pennsylvania governor, Rep. Marjorie Taylor Greene and Florida Gov. Ron DeSantis embracing or flirting with it.

Unsurprisingly, older Republicans are keen on a Christian state; they’re more likely to be evangelicals. Also unsurprising is the role of white grievance: 59 percent of Americans who think white people are discriminated against are good with Christian nationalism.

Like fundamentalism, racial grievance is a branch of the authoritarianism tree.

Donald Trump intuited that evangelical leaders would — after a few promises — overlook his past sins and fall in line. They did.

They didn’t sell their souls for nothing. They got Roe overturned, after all. But in their fealty to Trump, they turned their religion into a cultural identity that served Trump’s political movement.

In the process, they did neither God nor American politics any favors.