An ocean drone recorded exclusive footage of 50-foot high waves on video, detailing the inside of a hurricane.

The footage was captured thanks to a partnership between the drone company Saildrone and the National Oceanic and Atmospheric Administration (NOAA). The video showed the center of Hurricane Fiona while also giving a new perspective on how a dangerous storm looks on the inside.

Hurricane Fiona was the first major hurricane of the Atlantic Hurricane 2022 season. The  category 4 hurricane  caused severe damage to Puerto Rico, the Dominican Republic, and Turks and Caicos.

Saildrone utilized uncrewed drone sailboats to collect data from the ocean as Fiona passed. The drone also uses an oceanographic sensor to collect light, sound, temperature, and more aspects of the conditions. The company claims the device is capable of withstanding the harshest ocean environments and conditions.

Saildrone Explorer SD 1078 is just one out of the 7 devices placed across the Atlantic Ocean and the Gulf of Mexico to gather data about hurricane forecasting. The wind-powered ocean drone began sailing at 9 mph in the Atlantic Ocean before later hitting a speed of 39.7 mph.

The footage captured by SD 1078 demonstrated high waves of 50 feet and intense winds going over 100 mph. 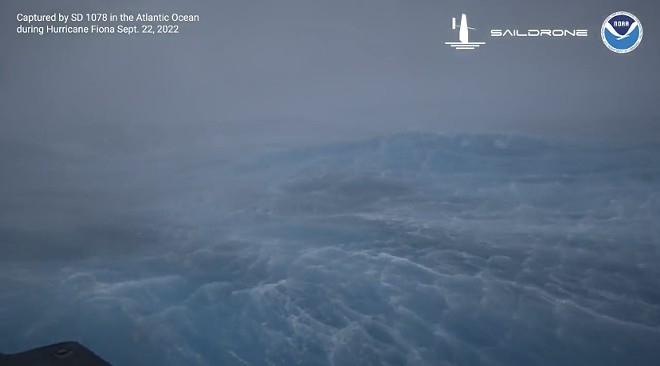 Photo via Saildrone/ Official website
Using Saildrone Explorer SD 1078, the device recorded waves as harsh as 50 feet and destructive winds over 100 miles per hour coming from inside of Hurricane Fiona.

The NOAA said the collection of data helps understand the "physical processes" of a hurricane such as storm intensity and storm safety. The footage released also provides a new and unique way to look at hurricanes.

“Saildrone is once again demonstrating its ability to provide critical ocean data in the most extreme weather conditions. Hurricane Fiona intensified from a tropical storm to a Category 1 hurricane just before hitting Puerto Rico, causing significant damage and loss of life,” Saildrone founder and CEO Richard Jenkins said in a statement released on Thursday. “The data Saildrone vehicles are gathering will help the science community better understand rapid intensification, giving people living in our coastal communities more time to prepare," he said.
© 2023 Orlando Weekly