The seizure of the guns comes after Berry exhibited red flags as a potential danger to the public, law enforcement says. 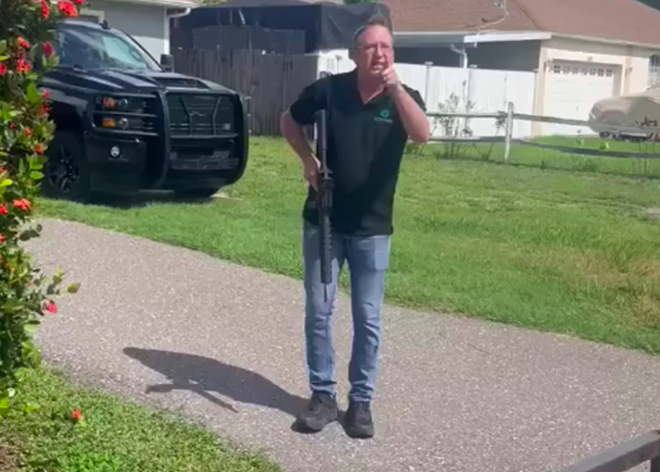 Screengrab via Jeremy Lee/Facebook
Screenshot from a video showing David H. Berry holding a gun while pointing and shouting at landscapers.

On Wednesday, Clearwater Police Department and the Pinellas County Sheriff (PSCO) seized the guns of David Berry, who was caught on video being aggressive to Black landscapers while holding an AR-9 rifle earlier this month.

On July 7, Berry came into conflict with a father and daughter mowing a yard across the street; the daughter caught the incident on video. He claimed that their landscaping trailer was blocking part of his driveway, but his neighbor's video camera shows that Berry had plenty of room to exit his driveway. The neighbor said Berry completely overreacted.

The video shows Berry shouting at both the father and daughter in an aggressive manner while pacing around with the rifle.

CPD and PCSO worked together to seize all of Berry's weapons that law enforcement is aware of,  CPD Chief Daniel Slaughter told Creative Loafing Tampa Bay.

"We were able to obtain a risk protection order and I'm grateful because I don't believe that this gentleman is acting rationally," Slaughter said. "And I believe that we're safer today than we were a week ago."

Slaughter explained that the risk protection order red flag requires certain elements that weren't necessarily present specifically on the day of the incident that occurred.

"But we were able to develop some other information that allowed us to apply for a risk protection order," Slaughter said.

The chief said that an incident occurred with a PCSO deputy who tried to serve Berry a subpoena after he had pulled the gun on the landscapers. He did not elaborate on what exactly happened, but said that enough red flags were raised for the risk protection order to be granted by Pinellas Courts.

As far as the potential felony or misdemeanor charges against Berry go for pulling the rifle in an aggressive manner on the landscapers, Slaughter said that the case is still being reviewed by the Pinellas-Pasco State Attorney.

"They are currently reviewing it and we're optimistic that it will be able to hold him accountable in some way shape or form," he said.

Pinellas County court records show that Pinellas County Sheriff's Office entered the risk protection order into the court, but the agency declined to comment on the seizure of the guns.

On July 11, the Clearwater Police Department announced the agency is seeking review of the case by the Pinellas-Pasco State Attorney on possible charges of aggravated assault with a firearm.

Florida Statute 790.10 says that any person exhibiting such a weapon "in a rude, careless, angry, or threatening manner, not in necessary self-defense" may be guilty of a first degree misdemeanor.

When asked if CPD is also having the state attorney review this possible charge, the Public Safety PIO offered a response via email.

"The chief says that you recommend the most serious charge you think is supported by the evidence," the PIO wrote. "If the state attorney desires, they can settle for that lesser charge."

Lakwana Jones, mother of Carrie Lee, who had the gun pulled on her, said that she hopes Berry is never allowed to threaten anyone with a gun again.

"I would like it to be where he cannot own any guns at all in life," Jones said. "He is not a guy who should be allowed to own guns, just by looking at his criminal record and the actions he has displayed with a gun in hand. He is a threat to society."