No, not Matt Gaetz (this time) 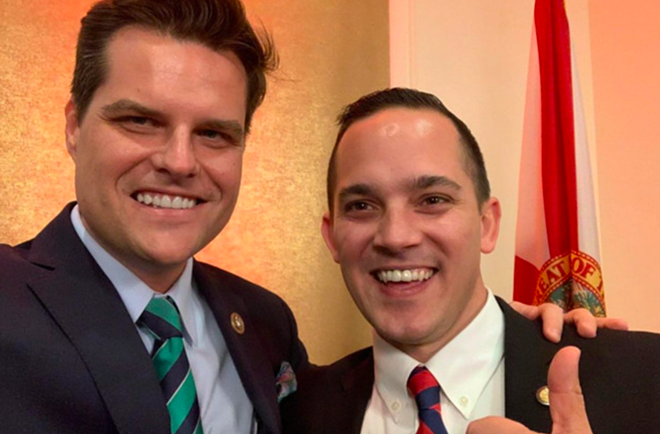 Sabatini accepted more than $7,000 in payments from the convicted fraudster and sex trafficker, who pleaded guilty to paying underage women for the purposes of sex, among other crimes. Greenberg has yet to be sentenced and continues to cooperate with investigators looking into other Florida GOP members, the most prominent of whom is House Rep. and Sabatini buddy Matt Gaetz.

The payments came for legal counsel a matter of days after Sabatini was admitted to the Florida Bar. Public records were unable to show any work that Sabatini did for the money, though he told the Orlando Sentinel that the payments were for work on "wrongful termination cases against him [Greenberg] from the employees that he terminated when he took office.”

"He's accepted payments from a convicted pedophile and sex trafficker," the mailer reads, opposite a news clipping about the payments and Greenberg's mugshot.

The front of the mailer states it in blunter terms, saying "He's cozy with pedophiles. Who else is he in bed with?" in large type. The mailer was put together by Citizens for Better Government Accountability, a PAC with a registered address inside a Winter Park office building. The PACs treasurer and chief contact is Deirdre Morrison of Arizona.

In addition to the claims about Sabatini's Greenberg connection, the mailer also points out that he was once a registered Democrat and paid for the services of disgraced political consultant Cliff C. Maloney Jr.