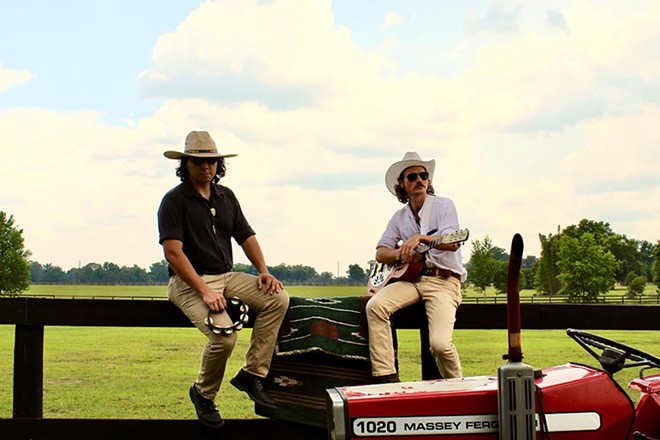 From inception, Central Florida artist C.B. Carlyle has stepped out with clear concept. Upon emerging solo last summer, he was already showing deep atmosphere. His full-length debut, On the Dead Stretch of Innerstate, was 11 lonely cowboy ballads that signaled his penchant for moody and spectral country music. Once things blossomed into a band effort as C.B. Carlyle and the Desert Angels with last October’s single “Sweet Violence,” things only got more cinematic.

New single “Fever Swamp,” however, is probably the Desert Angels’ most captivating and gothic song to date. It’s a marked stylistic detour that trades their usual wide Western landscapes for a dark midnight trek into the backwater.

Rendered with ancient patina, “Fever Swamp” is a mossy, humid stew of harrowing blues hooks, howling vocals and an ominous rhythm that clicks like rattling bones. The effect is five minutes that sound like an unearthed Delta field recording from a century ago rather than a track that came out of Lake County this year.

As Carlyle puts it, “We took a chance on this recording and made it sound like an old vintage blues tune, recorded in the 1930s in some bayou shack.”

Like a musical séance channeling old American ghosts, “Fever Swamp” is an arresting bit of mythical folk revivalism that ranks up there with C.W. Stoneking. It’s further proof that C.B. Carlyle and the Desert Angels, though still new, are already making a case as one of the most evocative bands to emerge from the area in a long time. Their gripping new single now streams on major platforms and is available as a $1 download on Bandcamp.