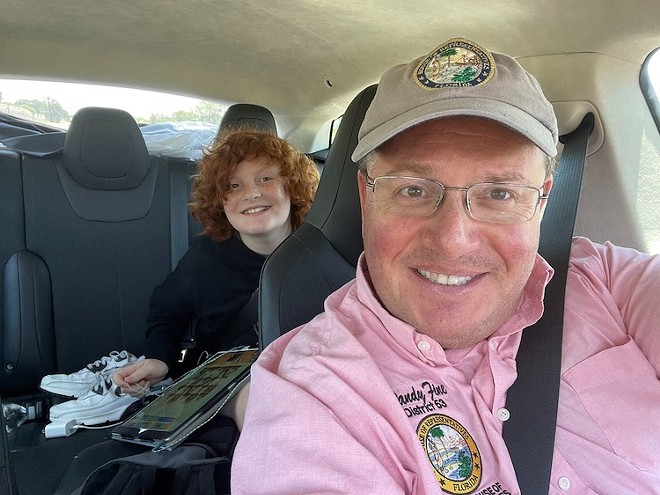 image via Rep. Randy Fine on Twitter
The worst part of the whole story is seeing this photo of Fine's own beautiful child, which he tweeted earlier in the week. What can Fine possibly be thinking?

In the wake of Tuesday’s school shooting in Texas, Democratic lawmakers in Florida called on their Republican colleagues to use time remaining in a special legislative session on property insurance to address firearm-related measures such as imposing universal background checks on gun buyers.

House leaders offered prayers as a response to the latest series of mass shootings, while some Republicans maintained opposition to any efforts to restrict access to firearms.

Rep. Randy Fine, a Republican from the Palm Bay area of Brevard County, on Wednesday told reporters it was “completely inappropriate” for President Joe Biden to “politicize the situation,” referring to a shooting Tuesday in Uvalde, Texas in which 19 children and two adults died.

Biden Tuesday night called for tougher gun controls and for Americans to stand up to powerful gun lobbyists.

“Why are we willing to live with this carnage? Why do we keep letting this happen? Where in God’s name is our backbone to have the courage to deal with it and stand up to the lobbies?” Biden remarked. “It’s time to turn this pain into action.” 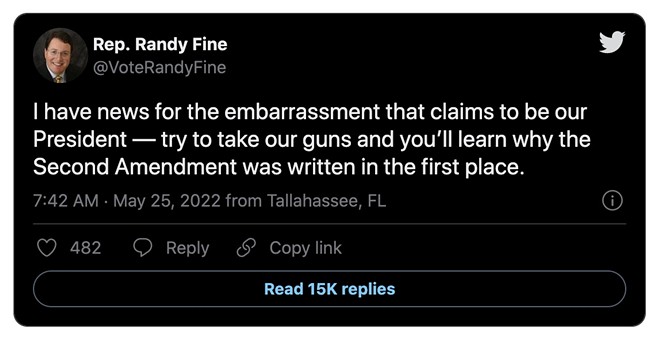 “I have news for the embarrassment that claims to be our President — try to take our guns and you’ll learn why the Second Amendment was written in the first place,” Fine tweeted.

Rep. Anthony Sabatini, a Howey-in-the-Hills Republican who is running for Congress, used Tuesday’s massacre at an elementary school to continue his push for a “constitutional carry” proposal, which would allow people to carry concealed weapons without first getting a license from the state.

“Florida must pass Constitutional Carry now, [number] 1 fastest way to secure our public spaces and institutions. Also, re-open the mental asylums that liberals closed in the 1970s and get these psychos out of society ASAP. Make the Edu-crats secure our schools for once!” Sabatini tweeted.

During Wednesday’s floor session, other House members were more restrained.

Rep. Dana Trabulsy, who delivered the opening prayer, said lawmakers are “heartbroken yet again in the wake of another mass shooting.”

“Lord, words of outrage are not enough to express our hatred of this evil that was done to children who simply went to school yesterday,” Trabulsy, R-Fort Pierce, said. “Lord, we pray that you guide us to turn ourselves and our hearts and minds to those that are suffering, including our friends here in this chamber, who are replaying the trauma of the past from Parkland and Pulse.”

Mass shootings occurred on May 14 at a Tops Market in Buffalo, N.Y.; at the Irvine Taiwanese Presbyterian Church in Laguna Woods, Calif. on May 15; and Tuesday at Robb Elementary School in Uvalde, Texas.

“I know that we all see the faces of our own loved ones and the faces that we saw yesterday and unspeakable grief,” Sprowls, R-Palm Harbor, said. “And throughout the course of these other tragedies, our hearts are with these communities as they continue to suffer. We know all too well what it looks like for a community to be suffering, the way that they are suffering.”

The Pulse nightclub in Orlando was the scene of a massacre in June 2016 where 49 people were killed and another 53 individuals were wounded.

Following the Parkland shootings, Florida lawmakers quickly enacted a gun-control proposal that raised the minimum age from 18 to 21 to purchase rifles and other long guns.

The 2018 measure, signed by former Gov. Rick Scott, also imposed a three-day waiting period for buying long guns, banned so-called bump stocks and established what is known as a “red flag” system, which allows law-enforcement agencies to seize firearms from people who may pose a threat to themselves or others.

At the time, lawmakers tabled proposals backed by gun-rights groups, including a measure that would allow people with concealed-weapons licenses to carry guns at churches and other religious institutions that share property with schools.

Gov. Ron DeSantis signed a similar bill into law last year. The governor, who is running for re-election this year, has said he expects to sign a constitutional carry proposal before he leaves office.

But Democrats on Wednesday continued to express concern about such a plan.

“What we don't need is to move in the other direction to allow permitless carry, which could snowball into open carry in the state of Florida,” Rep. Carlos Guillermo Smith, D-Orlando, told reporters during a press conference at the Capitol on Wednesday. “That will cost lives.”

Other Democrats at the press conference pledged to continue to push for gun-related regulations including universal background checks, safe storage laws, ID checks on ammunition purchases, restrictions on large capacity magazines and assault weapons, and expanded “Red Flag” mental health programs. The Republican-controlled Legislature has failed to advance such proposals in recent years.

“We could do all of these things, and not touch a single legally owned firearm by a responsible gun owner. It is time to have that conversation in Florida and for America,” House Minority Leader-designate Fentrice Driskell, D-Tampa, said.