No arguments. Bikini Kill are a band that have made an indelible impact on alternative music and the larger pop culture landscape in the three decades since the release of still-essential debut Riot Grrrl album Revolution Girl Style Now in 1991.

A reconvened Bikini Kill are today just as vital in a cultural and political landscape that sometimes feels like not a damn thing has changed. North American touring originally set for 2020 was postponed, but now it's happening. It's really happening.

These facts make Bikini Kill's show at the Plaza Live this weekend notable enough. Here's another: This clutch of dates in Miami, Orlando and St. Augustine mark the first time Bikini Kill have ever played Florida.

Even more notable than that? The guitarist for Bikini Kill since their 2019 comeback is none other than DIY underground lifer and legend — and Orlando-born — Erica Dawn Lyle.

Where do we even start with Erica Dawn Lyle's towering body of work? Lyle, a trans woman, is an inspirational creative figure with deep roots in Floridian punk going back decades. She's responsible for the seminal and compulsively readable zine SCAM; has played in bands from Chickenhead to Black Rainbow to Allergic to Bullshit; she's half of the art and music collective Sobbeth; runs Bermuda Triangle Press; co-founded the Brooklyn art space 7 Belvidere; has written books and contributed art criticism to publications like Artforum; and has even been known to play free-improv-noise when she has a spare second or two in her schedule. She does Florida proud, in other words.

Orlando Weekly reached Lyle by telephone with the Florida shows mere days away. 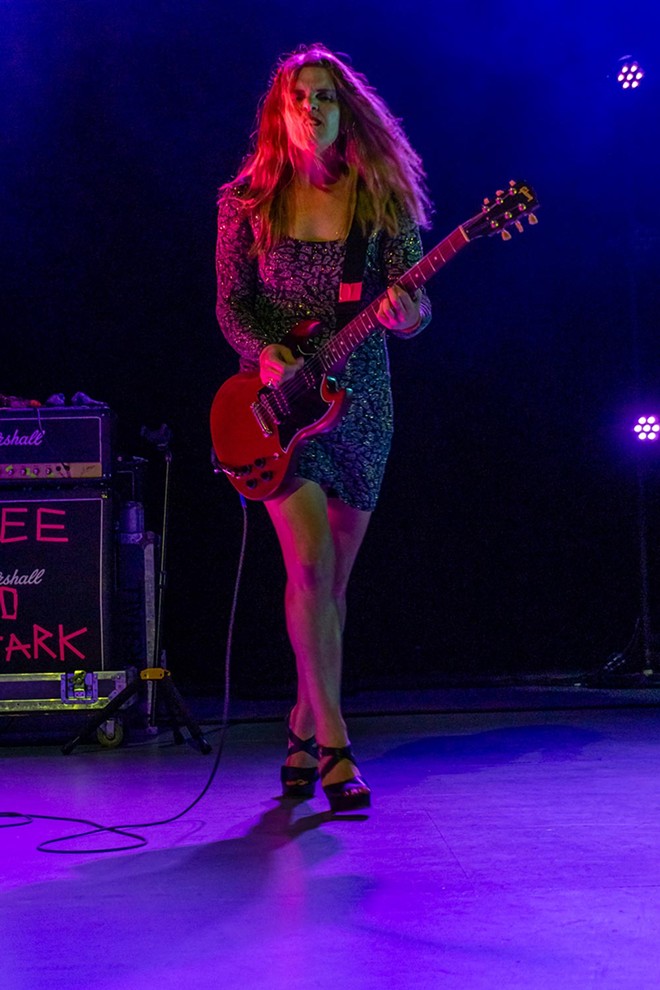 "It's electrifying to be back on stage with Bikini Kill again. They're fiery, brilliant performers. And the audiences are really special," says Lyle of the shows thus far. "We get a lot of really excited, teenage female-identified people and lots of young queer people coming to the shows. After not being on a stage in front of audiences for a couple of years, to go from a place of relative isolation to this profound togetherness is really moving."

With Bikini Kill's multi-generational audience in mind — is it a coincidence that audio from Bikini Kill's Washington, D.C., Capitol Plaza protest performance from 1992 (where the flyer presciently shouted "Fuck the fucking rightwing Supreme Court") is running in an endless loop in this writer's brain? — Lyle talks about how there's little room for the luxury of nostalgia in Bikini Kill's music and worldview.

"The problem of women being under attack by this society is still relevant 30 years from the band's initial beginnings, and so there is a receptive body as to what Bikini Kill represents in this time and place," says Lyle. "The band's presence alone provides an umbrella for multiple generations of women and non-masculine identified people to come together and share the same space with each other, and see each other, and potentially get to know each other and experience together the full spectrum of emotions. From female rage to joy."

A seemingly unstoppable multitasker, besides her Bikini Kill six-string duties, Lyle is also focused on the impending release of a mutual-aid benefit album on June 3 through Bandcamp (ericadawnlylevicecooler.bandcamp.com). Land Trust: Benefit for NEFOC will raise money for the Northeast Farmers of Color Network, and it's got a head-spinning array of punk and underground guest musicians pitching in with Lyle and collaborator Vice Cooler — from members of the Raincoats to Mike Watt to Kathleen Hanna and Kim Gordon.


The initial inspiration for Land Trust came during the early months of the pandemic in 2020. With Bikini Kill's tour canceled and inspired by the outpouring of mutual aid support she was seeing all around her, the plan was hatched for a digital-only album based around tracks she and Cooler were writing in prolific bursts, with guest vocalists from all around her creative circles.

"This is an indigenous-led, grassroots organization that's acquiring land to return it to indigenous nations and to help POC farmers set up collectively-run land trust farms. So they help people buy farms. They help people start farms," explains Lyle of NEFOC. "Having land makes a lot possible."

Though Sunday will be Bikini Kill's first time in the Sunshine State, Lyle spends a significant amount of time in Florida and still has family and connections here. She's looking forward to her return.

"When I was a kid playing shows in Miami, we often were taking a generator out into the Everglades to some barren parking lot in the middle of nowhere, in order to simply have a place where we felt like we could be ourselves without regulation by society. It's wonderful 30 years later to be able to play for a much larger audience, and in a more receptive sort of way," says Lyle.

Talk inevitably turns to the state of things in Florida, and Lyle is clear-eyed in the way that only someone who has spent significant time here can be. "It's heartbreaking what's happening in Florida. ... This place could have been paradise on earth, and yet it's just been hijacked by all these evil interests," says Lyle.

"It's important to remember that Florida has been strategically hijacked entirely by these right-wing proto-fascist interests that don't actually represent the true makeup of the state."

And yet Lyle remains hopeful about possible futures for Florida, hesitant to give any experiential insight to the youth on the ground doing the hard work.

"Florida kids probably don't need my advice on how to fight back. There is already a strong tradition of exciting youth activism from how the Parkland kids became national anti-gun violence advocates, to Zander Moricz, the youngest public plaintiff in the 'Don't Say Gay' lawsuit. Zander is in Sarasota, the first openly gay class president at his school, who is now fighting to be allowed to speak at graduation. Florida kids already know what to do and how to do it!"

And what will Florida kids be doing this weekend? Singing their hearts out to Bikini Kill. Grrrls to the front.