Get a leg up 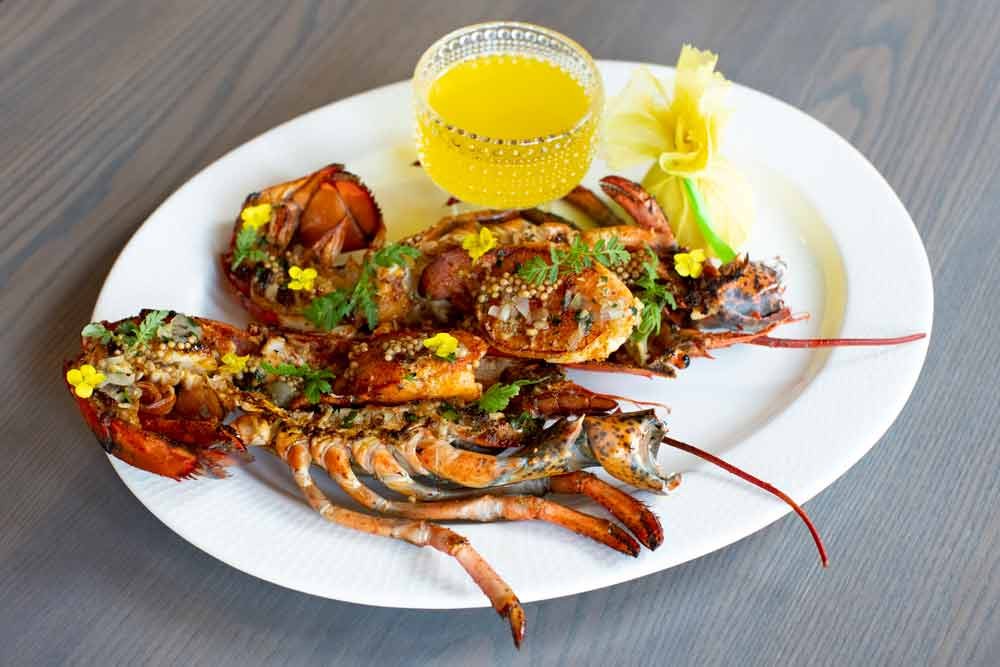 Getting Top Chef: All-Stars champeen Richard Blais to lend his name and culinary expertise to the signature restaurant inside the Hyatt Regency Grand Cypress has, I'm sure, paid off for both Blais and the resort. Never mind that the curiously coiffed culinaire has never been in the kitchen of Four Flamingos: A Richard Blais Florida Kitchen (it's a mouthful, I know) in my three visits. Fact is, the place has been packed each time. I could see guests (myself included) craning their necks like flamingos, trying to catch a glimpse of Ricky Red Mane inside the surprisingly small open kitchen. No luck. Hey, absentee chefs be absentin'. But chef de cuisine Shelby Farrell, who regularly takes charge of the kitchen, has proven wholly capable of executing Blais's Floribbean menu — a menu that takes cues from Norman Van Aken, Allen Susser and the other Mango Gang alumni who put Florida cookery on the map with their brand of New World cuisine.

Only Blais has a thing for theatrics and molecular chicanery, like the raspberry bomb ($18) cocktail. It's shot tableside with a "Flavour Blaster" to create a delicate smoke bubble over the quaff. It's up to you to pop the bubble by dropping a spring of rosemary into it. Playful? I suppose. But it would've been a whole lot more enjoyable had the drink not been so cloying.

Then there's the half-dozen raw oysters ($24), smoked with liquid nitrogen and dotted with "pearls" — that is, wee hibiscus and datil pepper-flavored balls created through the process of spherification, no doubt something Blais picked up after staging at Ferran Adria's el Bulli in 2003. There's more spherification in the passion fruit "yolk" nested atop tuna tartare spooned over tostones. Only now, the tostones have been swapped out for tostadas — a bit of a dumbing down and a departure from the whole "Floribbean" ethos.

But just as it was with the space's predecessor, seafood is the focus at Four Flamingos. Seems the bell tolled for that old man of the sea, Hemingways, even after its striking facelift in 2019. In the case of the Hyatt Regency Grand Cypress, modern times called for modernist sensibilities, yet we found the dishes that eschewed Blais' chemical romance to be the most gratifying — whole lobster ($62) split, grilled and served with lemon butter; superb tilefish ($42) served over collard greens pooled in beurre blanc; and an empanada ($14) stuffed with oxtail and foie gras and served with mango relish.

Even the hearts of palm Caesar salad ($14) made a solid start to the meal, but not as solid as the cornmeal tamale ($28) blanketed by three ounces of lobster, pickled onions, Italian caviar and white truffle sauce. It's an outstanding shareable and really should be a permanent fixture on the menu.

Arguably my favorite Four Flamingos dish is the moqueca ($39), a spicy seafood stew with tilefish, scallops, clams, shrimp and calamari cooked in a ruddy coconut milk broth. I didn't see any of the promised shrimp or calamari in the bowl, but that didn't spoil my mood any. It's served with a side of sticky coconut steamed rice and, really, it's the poster dish of the restaurant.

There are other sides to augment your proteins: notably, jerk-spiced cauliflower ($11) and crispy-skinned papas bravas ($13), made with russet and boniato sweet potatoes that are coated in a chorizo-brown-sugar-butter aioli.

There's a vintage aspect to the desserts that can trigger a sort of visual ASMR. The layered coconut-yuzu cake ($12), with its rounded edges and tufts of piped coconut mousse, had all the midcentury feels, while the Key lime pie shaped in the form of a lime and its blossom ($12) was a whimsical rendition of the classic, and a great one at that.

It's still early days, so there are service issues — bussers seemed to be a bit clueless on our first visit, and a clumsy-handed manager filling in for a server caused spillage at the table next to us, leading to their fried snapper (impressively presented in an upright fashion) to topple over onto the table. But, for the most part, the servers are experienced, know their stuff and seem genuinely happy to be working here.

I overheard some guests make, um, a flap about menu prices, but that's an industry-wide phenomenon, folks. Get used to it. No, it's not a cheap night out, but when it comes to mentions of the best hotel restaurants in the city, Four Flamingos has a leg to stand on.