Now residing at Mar-a-Lago in Palm Beach, former president Trump is familiar with the construction boom the state has seen in recent months. Trump is looking to cash in on this with a major overhaul to his Doral resort. Like other Trump-branded properties, Doral has struggled to remain popular, with its branding now more closely associated with white nationalists than luxury.

In a statement announcing the expansion of the Doral resort, Donald Trump stated it would include 2,300 luxury residences along with expanded commercial facilities. The announcement also featured the official seal of the President of the United States, and the statement was issued via his office of the former president. Trump claims the project is “perhaps the most exciting development in the Country.” 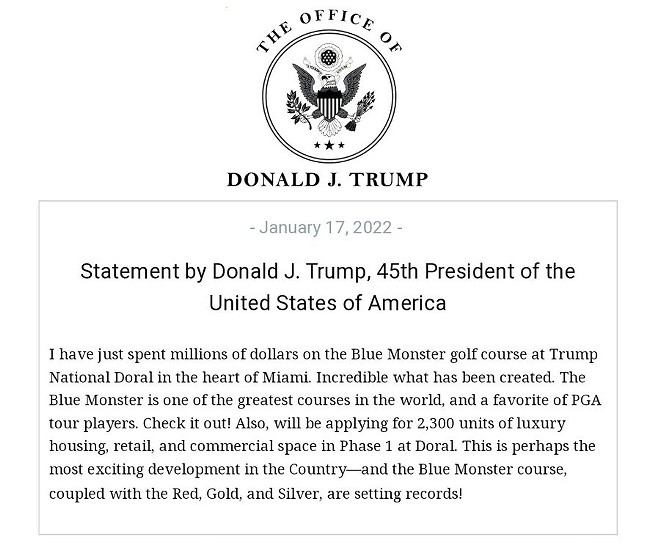 Documents filed with the FAA, first reported on by The Next Miami, point to up to four towers, each 443 feet tall.

South Florida already has multiple Trump-branded luxury residential towers, built by Michael Dezer, the eccentric South Florida billionaire behind I-Drive’s Dezerland attraction. It’s unclear if Dezer’s company will be working with Trump on this latest project, but in an interview last spring, Michael’s son Gil Dezer said he had no regrets working with Trump and “agreed with a lot, almost all of his policies.”

Located in an industrial area filled with warehouses near Miami International Airport, the Doral resort has struggled to remain relevant, losing a major PGA tournament to Mexico in 2016. News of the move was broken by Trump during an interview with Fox News host Sean Hannity. It was at one point to host the G7 Summit but those plans were canceled after backlash.

Last year, Eric Trump floated the idea of the resort being turned into a casino, something that would require the support of Florida politicians.

Purchased out of bankruptcy in 2012, Trump has spent millions on the Doral resort, but as the focus in Trump world shifted to D.C., it has played second fiddle to other Trump properties, such as Mar-a-Lago and Trump’s D.C. hotel. The latter is soon to be sold off and rebranded, removing any mention of Trump. Doral is facing its own crisis with millions in loans, guaranteed personally by Trump, soon to come due.

For now, all we have is more promises of grandiose plans and sinking feeling that Miami may soon be home to 2,300 more Trump supporters. No timeline or other details on the new residences was shared.