This week ‘Archive 81’ makes the leap from popular podcast to Netflix series, plus 13 more streaming premieres

Premieres Wednesday: Cheer — Season 2 finds the cheerleading team of Texas' Navarro College coping with the COVID crisis and the arrest of member Jerry Harris on child-pornography charges as they work toward the national championships in Daytona. Right. Because if you're trying to get away from the 'rona and sex crimes, Florida is definitely where you wanna go. (Netflix)

Wild Things: Siegfried and Roy — I swear on a stack of Bibles that the official promo for this documentary about the celebrated Vegas entertainers refers to them having been "lionized" by their adoring fans. So in case you were wondering, unfortunate phraseology is going to continue its winning streak in 2022. (Apple TV+)

Premieres Thursday: Brazen — Nora Roberts' novel Brazen Virtues becomes a suspense/romance flick in which a mystery writer (Alyssa Milano) discovers that her murdered sister had been working as a cam girl. Call me a libertine, but it's the "murdered" part that bothers me more. (Netflix)

The Journalist — The 2019 film The Journalist won Best Picture in the Japan Academy Prize competition for its portrayal of a crusading reporter on the trail of a government scandal. Now director Michihito Fujii offers up a series with the same name and focus but different characters. They still work at the same newspaper, though, because apparently not even Japan can sustain more than one of those things these days. (Netflix)

My Mom, Your Dad — It sounds like the playground taunt of a particularly confused third-grader, but it's actually a reality series about single parents who have to cohabitate. The kicker: Their kids are secretly their neighbors, and are trying to get the old duffers to hook up in the combinations they prefer. The show is created by Greg Daniels of The Office, so expect all the smooth sentimentality of Michael Scott's relationship with Pam's mother. (HBO Max)

Next Influencer — Making the leap from YouTube to streaming (and yes, it's definitely 2022 when that's something to boast about), this reality competition is entering its third season of determining which contestant has the most aptitude for getting impressionable teenagers to buy shit they themselves don't actually use. I'm holding out for Instagram's Next Top Body Shamer, especially if the participants are subject to lawsuits from the parents of the deceased. (Paramount+)

Peacemaker — James Gunn wrote all eight episodes of this spinoff series while he was directing last year's well-received feature The Suicide Squad. And what did David Ayer manage to accomplish while he was filming 2016's similarly named but almost universally reviled Suicide Squad? Hopefully, he got to knit himself a nice muffler. (HBO Max)

Wolf Like Me — We're promised a big reveal in every one of the six episodes as Josh Gad's widower character strikes up a complicated relationship with a woman (Isla Fisher) who's keeping a dark secret. Let me guess: They met on the set of My Mom, Your Dad. Back when she was still a man. (Peacock)

Premieres Friday: Archive 81 — Making the leap from a popular podcast to streaming (which was totally something to boast about last year), the supernatural-inquiry franchise mutates into a drama series in which a collection of 25-year-old VHS tapes reveals the truth behind a satanic cult. OK, I take back my insinuation that there's a lack of vision going on here: Anyone can throw a bunch of "found footage" on the screen and call it an homage to The Blair Witch Project, but when your show is about people who get to second-guess somebody else's found footage, your indiscriminate nostalgia has moved into full-on Blair Witch 2 territory. (And who had January 2022 in that betting pool?) (Netflix)

Hotel Transylvania: Transformania — The fourth installment in the series that's best described as this generation's Mad Monster Party is the first not to feature Adam Sandler as the voice of Dracula. And its intended October 2021 theatrical run got changed to a streaming-only January release so it wouldn't get its ass kicked by Addams Family 2. Gosh, it must be gooooood. (Amazon Prime) 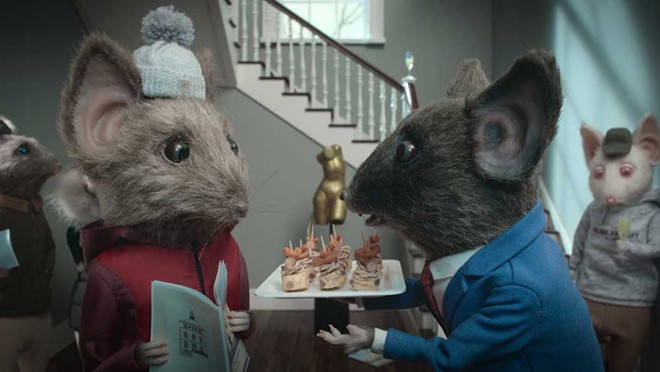 The House — Stop-motion animation is the vehicle for a darkly comic trio of tales concerning the human and animal inhabitants of one particular abode. The clips that have been released so far look like textbook Wes Anderson, except that some of the action occasionally takes place outside the dead center of the frame. I guess ol' Wes would call that a rookie mistake. (Netflix)

Riverdance: The Animated Adventure — The theatrical sensation of a quarter-century ago is now a feel-good animated flick that puts an Irish kid and his Spanish BFF on a path to cultural and self-awareness via hoofing. "There is humour, a little moralising, and Riverdancing giant elks, so what's not to like?" asks Ireland's Sunday Independent. Good question. Here's another: How can we get some beavers into Stomp? (Netflix)

Sex Appeal — And speaking of things that were a sensation a quarter-century ago, Margaret Cho is in the cast of this teen sex comedy. (OK, I'm using the term "sensation" a little liberally here, but it's a new year and I'm trying to cultivate the better angels of my nature.) Obviously, Cho isn't bringing the teen element, but rather the informed adult perspective that counterbalances the naiveté of a Type A high-schooler (Mika Abdalla) who's trying to lose her virginity in the most efficient and correct way possible. Hell, back in the day, we just laid in a supply of wine coolers, threw on our VHS of Private Resort and let nature take its course. Right, Margaret? (Hulu)

Premieres Tuesday: How I Met Your Father — The long-promised female-centric spinoff of How I Met Your Mother has a woman named Sophie telling her son how she hooked up with his dad. Flashback Sophie is played by Hilary Duff, while her future self is none other than Kim Cattrall. See, just a month ago, my joke here would have been that any future involving Kim Cattrall would have her speaking from a mausoleum in a series titled How I Met Your Father in the Boer War. But she had the good sense to bow out of And Just Like That, so who's laughing now? (The answer, of course, is Kyrsten Sinema. It's always Kyrsten Sinema.) (Hulu)