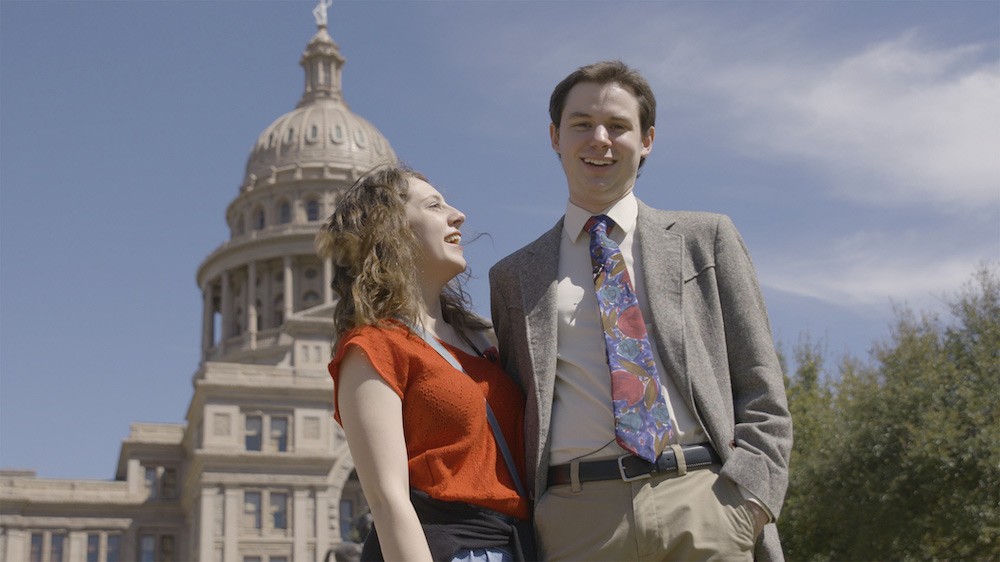 In 1979, Dead Kennedys singer and agit-punk legend Jello Biafra ran for mayor of San Francisco as an independent. Biafra's campaign was built around his caustic, nihilistic humor and over-the-top pronouncements — all cars banned citywide, all businessmen required to wear clown suits within city limits. He finished third in a field of 10. Amarillo's Hayden Pedigo, the subject of Kid Candidate, while a denizen of the underground, avant-garde arts world, is no Jello Biafra.

But maybe that's not such a bad thing?

The titular Kid Candidate, Pedigo, is a mid-20s resident of Amarillo, Texas, and though he is an experimentally inclined guitar player and part of a loose collective of outré filmmakers and enthusiasts, he's the polar opposite of the types you'll find at noise shows around the country. He has an appealing, aw-shucks idealism filtered through a 21st-century lens, like Mr. Smith Goes to Washington presented as an episode of Nathan for You.

The film follows Pedigo's beyond-longshot campaign for a City Council seat in Amarillo. The campaign grew out of a funny and eccentric video Pedigo made with friends that quite by accident became a Reddit sensation and a catalyst for Pedigo to turn a jokey campaign video into the real thing.

Of course, anyone watching this film can (spoiler alert) telegraph Pedigo's loss from the opening credits, but the thrust of the film is Pedigo unexpectedly growing into his role as a candidate, bereft of guile and, by his own choice, campaign donations. What started as something absurd becomes something that could legitimately impact lives, muses a wide-eyed Pedigo early on.

As much as it is a look at Pedigo's political journey — aided and abetted by his supportive wife, ragtag artist friends, a delightfully caustic local lawyer and activist, and heartfelt interactions with the South Sudanese immigrant community — it's also an investigaton into and indictment of the old money oligarchy (emphasis on "old") that holds Amarillo's civic life in tight, gilded clutches.

Confounding expectations from the start, Kid Candidate is an endorsement for giving a damn about where you live.