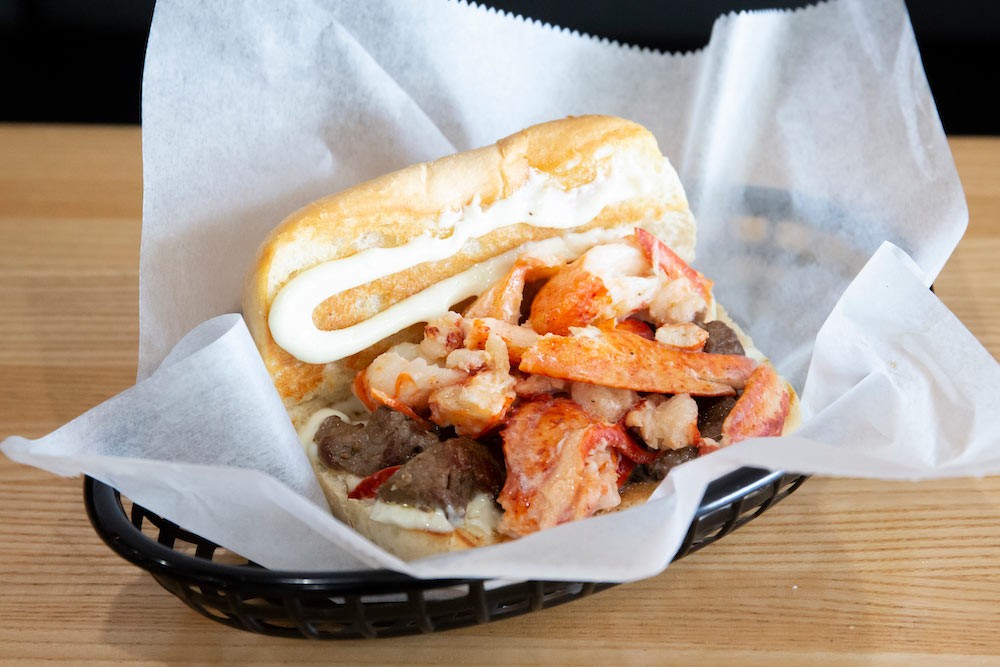 Welcome to Nick Filet, home of the $30 sandwich. If a $30 sandwich sounds obscene, consider the following: 1) It's comprised of 16 ounces of filet mignon stuffed into a Kaiser roll; 2) The restaurant where it's served is situated in the Marketplace at Dr. Phillips, where Orlando's 1-percenters often cluster; 3) If you scarf it down in less than 10 minutes, you'll get your gluttonous mug up on their "wall of fame"; and 4) It actually costs $29.99.

OK, maybe it is obscene and, c'mon, celebrating piggish behavior with a photo wall seems just a bit, I don't know, 2005. But there Nick Filet stands, encompassing all the spirit and vivacity of a freshly slaughtered cow. I mean, there's more to interior design than repurposing the motif of a space's predecessor (in this case, LemonShark Poke) and painting a wall red. Then again, this is a fast-casual eatery and lingering patrons aren't part of their business model. No, it's all about selling pricey meat sandwiches here, though, of course, there are less extortionate sandwiches to be had. There's the half-pounder ($18.49) and the quarter-pounder ($11.49), the latter tagged with "most popular" status. Gee, I wonder why.

That said, the surf and turf sandwich ($18.99) did draw some intrigue for its half-pound mix of filet mignon and lobster cooked in butter (sorry, Mainers) served on a mayo'ed club roll. It's drizzled with warm butter and, along with a side of Old Bay tater tots ($2.59 small; $4.15 medium; $7.49 large), made for a decent lunch. If it's only the surf you crave, they also serve a lobster roll ($15.99), four ounces of chilled claws and knuckles dressed with mayo (sorry, Nutmeggers). It, too, was all well and good — that is, until I bit into a shell. Never fun, especially given I'd been at the dentist earlier that day.

No shells in the Nicky Diablo ($11.99), with its quarter-pound of filet layered with pepper jack, jalapeños and hot sauce. This sandwich was enjoyed with a side of white cheddar mac & cheese ($5.49) that I liked even more than those seasoned tots. Now, being a chain out of Philadelphia, Nick Filet does serve what they call a "Nickadelphia" ($11.99/$18.99) with provolone, onions and horseradish sauce on an Amoroso's bun. Will it supplant the cheesesteak? You can probably guess.

The Dr. Phillips location is the first Nick Filet outside of the Philly/Jersey Shore area. So why Orlando? Chains and Orlando go hand-in-hand, as you know, but owner Nick Kline said his main reason for opening here was Florida's looser COVID-related restrictions. (Gov. Ron DeSantis even appeared at the opening.) Naturally, an expansion plan has been put in place for Texas as well.

The workers here wear T-shirts that say "100% real filet mignon" on the back. I LOLed when I first saw it, but then I started thinking about it a little more. Why "100%"? Why "real"? Why not just have it say "filet mignon"? Have skeptical customers questioned the authenticity of the beef? No one here could tell me the grade of beef being used (it's certainly not USDA Prime), or from where the meat is sourced. They could've made some calls or inquiries, given there was hardly anyone in the restaurant.

But then it hit me. Nick Filet is a play on Chick-fil-A, and its menu is an inverse of the most popular chicken chain in the country. Sure, imitation may be the greatest form of flattery, but given the dearth of patrons here, I'm guessing they'd rather Eat Mor Chikin.