The best streaming premieres of the week.

Premieres Wednesday: Godzilla vs. Kong — The Foreman and Ali of the MonsterVerse face off in the donnybrook you've been waiting for — unless you live in Europe, in which case you saw it a week ago. Initial buzz from those international showings is that the pic is big on spectacle but short on character development. Damn, and I was really hoping to find out both of them have mothers named Martha. Or Mothra, as the case may be. (HBO Max)

Premieres Thursday: The Challenge: All Stars — Capitalizing on the recent Real World reunion, 22 of the reality genre's OGs push body and soul to the limit to win $500,000. Seriously, that's all? Even Dr. Evil hasn't been impressed by half a mil since the world found out Puck was an asshole. (Paramount+)

Creepshow Season 2 — The next batch of installments in the horror anthology series promises a whole bunch of high-profile guest stars, including none other than Molly Ringwald. Gosh, I hope it's an adaptation of that old Gilbert Gottfried routine where he says he's dating her disembodied head. The world needs to see that! (Shudder)

The Great Pottery Throwdown Season 4 — Once again, the Brits move heaven and Earth to find their greatest home potter. As opposed to their greatest public Potter, whose name we can't mention anymore because J.K. Rowling won't shut up about her vag. (HBO Max)

Made for Love — In this dark-comedy series, Cristin Milioti plays a woman who discovers that the husband she's trying to escape has planted a controlling chip in her brain. Bet Melinda Gates is having second thoughts about getting that vaccine now! (HBO Max) 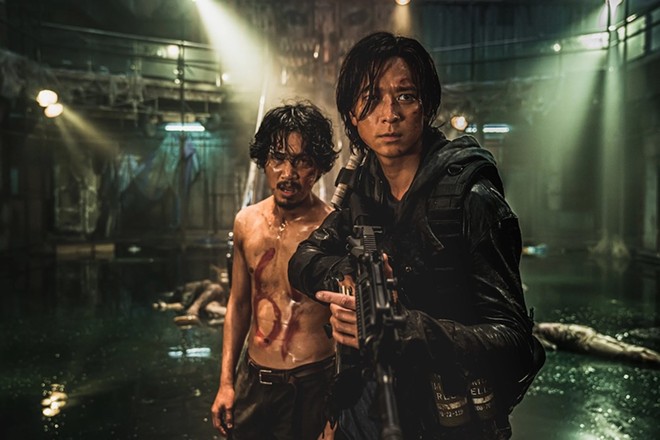 Train to Busan Presents: Peninsula — The South Korean zombie franchise enters its Day of the Dead stage, pitting soldiers against the undead in a war for survival. Notice that director Yeon Sang-ho has conveniently skipped his Dawn of the Dead stage, because nobody in this day and age wants to be remade by Zack Snyder. (Shudder)

Worn Stories — A new docuseries in which regular folks explain the emotional significance of their favorite items of clothing. Speaking of which, have I ever shown you the frock I wore that time I scared the shit out of J.K. Rowling? (Netflix)

Premieres Friday: Madame Claude — Revisiting the terrain of a similarly named 1977 flick, this biopic tells the allegedly true story of a French madam whose bordello business exposes her to the secrets of the rich, famous and powerful. Funniest line in the trailer: "Clean this up, Marlon Brando will be here in 15 minutes!" Are you sure he doesn't think it's a Wendy's? (Netflix)

WeWork: The Making and Breaking of a $47 Billion Unicorn — Learn how the titular office-share company crashed and burned in a documentary that focuses on the excesses of founder Adam Neumann. Then again, you sort of take your chances when you go to work for a guy whose corporate philosophy is "What, me worry?" Wait, I'm sorry: That was his cousin, Alfred E. My bad. (Hulu)