By Ana Ceballos and Jim Turner, News Service of Florida 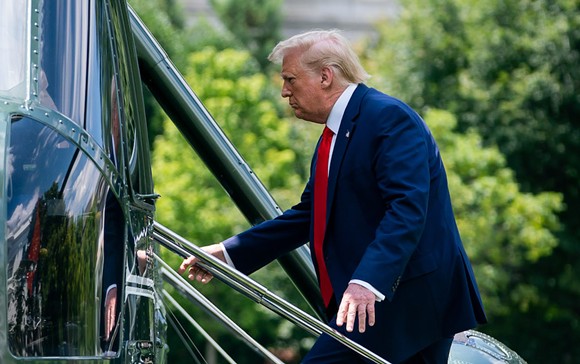 Photo via the White House/Flickr
President Donald Trump announced Thursday the Republican National Convention won’t be held next month in Jacksonville, citing the "flare up" of COVID-19 cases in Florida.

“To have a big convention, it’s not the right time,” Trump told reporters at the White House. “It's really something that, for me, I have to protect the American people. That's what I've always done. That's what I always will do. That's what I'm about.”

Trump said he will still make his nomination acceptance speech that was scheduled for Aug. 27, but “we won’t do a big crowded convention.”

He said the decision to scrap the Jacksonville event wasn’t made by local officials, instead pointing to a need for safety and potential negative media coverage.

“I could see the media saying, ‘Oh, this is very unsafe,’” Trump said. “I don't want to be in that position. It's safety, not because of the media, but that's what they would say.”

Jacksonville Sheriff Mike Williams this week expressed concern about a lack of preparedness for the event, which had long been planned for Charlotte, N.C., but was moved to Jacksonville last month. Mayor Lenny Curry agreed with Williams’ comments.

"It's safety, not because of the media," said Trump.

Curry and Williams, both Republicans, issued a joint statement Thursday thanking Trump for his decision to call off the Jacksonville event.

“We appreciate President Donald Trump considering our public health and safety concerns in making this incredibly difficult decision,” the statement said. “As always, in Jacksonville public safety is our number one priority. President Trump has once again reaffirmed his commitment to the safety of Jacksonville, Florida and the people of the United States of America.”

Republican Party of Florida Chairman Sen. Joe Gruters, a state senator from Sarasota, said Trump was “selfless” in the decision.

“He put the safety and well-being of Floridians first,” Gruters said in a statement released by the party. “His leadership will continue to energize voters, and we look forward to helping him win Florida on his way to a second term as president.”

“I’m glad Donald Trump took his head out of the sand long enough to realize what a predictable, preventable disaster he was about to inflict on the city of Jacksonville,” state Democratic Chairwoman Terrie Rizzo said in a statement. “His ego-driven political stunt has wasted precious time and resources during a pandemic, and Floridians will remember his reckless leadership in November.”

Republican leaders last month decided to move key parts of the convention from Charlotte to Jacksonville after Trump expressed displeasure that North Carolina Gov. Roy Cooper, a Democrat, was "unable to guarantee" that coronavirus social-distancing requirements would be lifted before the event, which was scheduled for Aug. 24 to Aug. 27.

But Florida has been inundated with COVID-19 cases during the past month, becoming a hotspot for the disease.

Last week, the Jacksonville host committee scaled backed the size of the event because of the pandemic, while announcing that indoor and outdoor facilities would be used for various events.

Jacksonville fought for the convention by pointing to the potential for up to $100 million in local economic impact. But even that projection was taking a hit as plans were scaled back.

The Jacksonville City Council was scheduled to hold a workshop Friday on a $33 million convention funding request for such things as designated protest zones and event security. But the request was drawing red flags from local officials.


_
Please follow CDC guidelines and Orange County advisories to stay safe, and please support this free publication. Our small but mighty team is working tirelessly to bring you news on how coronavirus is affecting Central Florida. Please consider making a one-time or monthly donation. Every little bit helps.
© 2022 Orlando Weekly