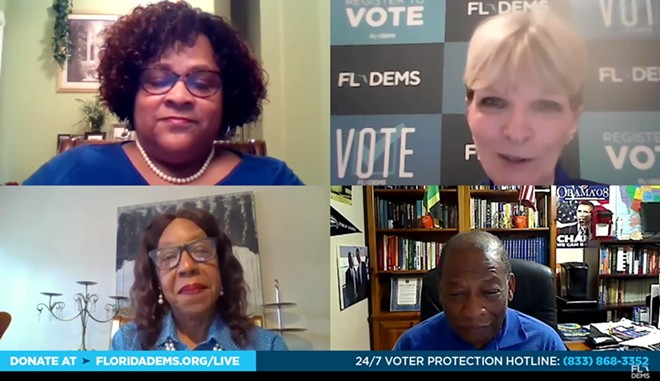 But with COVID-19 forcing the cancellation of in-person events in Florida and throughout the nation, the 2020 election cycle is far from normal.

For the first time, Florida Democrats on Saturday skipped the soirees, schmoozing and selfies that are a staple of their annual convention.

The web event came as Republican Gov. Ron DeSantis faces a growing chorus of criticism for his handling of the pandemic in the Sunshine State, where COVID-19 cases have skyrocketed in recent weeks and the number of deaths related to the highly contagious respiratory disease continues to soar.

The virtual convention, which was scheduled to last two hours but wrapped up within an hour, featured video clips of state and national party leaders, including Biden and Democratic National Committee Chairman Tom Perez.

"The soul of America is at stake," said Biden.

In a short video introducing the former vice president, South Carolina Congressman Jim Clyburn stressed the significance of Florida — a battleground state whose 29 electoral votes are considered critical for a White House win by Republicans and Democrats — in the upcoming presidential election.

“If he wins Florida, he becomes the next president of the United States, and we will move just a few steps closer to making the country’s greatness accessible and affordable for all,” Clyburn said.

Biden, speaking for just over three minutes, only briefly mentioned President Donald Trump. The Democrat noted that COVID-19 has caused more than 130,000 deaths in the U.S., which has more coronavirus infections than any other nation.

Biden said the nation also is “grappling with real and meaningful ways to deal with a legacy of systemic racism,” a theme on which the candidate focused during his remarks.

“We are dealing with multiple national crises all at once. We need real leadership, and we need it now,” Biden said. “It’s time for us to take a real hard look at uncomfortable truths. It’s time for us to face the deep open wounds of systemic racism in this nation. Nothing about this is going to be easy, nor is it going to be comfortable. If we simply allow the wound to scab over once more, without treating the underlining injury, we’ll never truly heal.”

Saying “the soul of America is at stake,” Biden encouraged Floridians to support Democrats up and down the ballot.

“Florida is an incredibly important battleground state for our campaign in 2020,” he said. “The stakes in this election have never been higher. They’ve never been higher in our entire history. We have to work harder than ever to stand up as a nation.”
The online convention robbed Democratic grassroots supporters of an opportunity to mingle with Biden, lesser-known candidates and one another.

Perhaps more important, the absence of a face-to-face fete prevented lesser-known candidates running for local or legislative seats from attending after-parties where critical connections are established and contributors stroke checks to candidates and political committees.

“Do you want to go see Billy Joel in concert or at a Zoom concert? There’s no way to describe both, except one is great and one is sorry,” John Morgan, an Orlando trial lawyer who hosted a fundraiser for Biden at one of his homes last year, told The News Service of Florida in a telephone interview.

The virtual convention — which cost $50 to attend and drew about 1,000 viewers — deprives people of “all that fellowship and all that goes with it,” including photos, said Morgan.

“People love pictures with other people. So they don’t get to take a selfie. They don’t get that. But at the end of the day, these conventions are really just about raising money. I’ve been to them, and they’re horrible,” he said.

But Beth Matuga, a Democratic political operative and fundraiser, said conventions aren’t the best way for candidates to raise money.

Donors contribute to campaigns because they “believe in the cause,” especially in state legislative races, Matuga said in an interview.

For fundraising purposes, the virtual convention might not be a disadvantage for legislative candidates “because there’s not as much of that star-driven desire to write a check,” she said.

“The donor community has never been completely jazzed up about that,” Matuga added.

Removing in-person events “helps candidates to do more really focused call time, which is the backbone of a good fundraising campaign anyway,” she said.

Democrats on Saturday evening jabbed at Trump, DeSantis and other Republicans, who are holding their national convention next month in Jacksonville.

GOP leaders decided to move key parts of the convention from Charlotte, N.C., to Jacksonville after Trump expressed displeasure that North Carolina Gov. Roy Cooper, a Democrat, was "unable to guarantee" that coronavirus social-distancing requirements would be lifted before the event.

But as the number of COVID-19 cases in Florida continues to mount, Republican National Committee officials on Wednesday announced they were scaling back the convention.

Only regular delegates will be allowed to attend the first three days of the GOP convention, while they will be able to bring guests to hear Trump publicly accept the party’s nomination on Aug. 27. 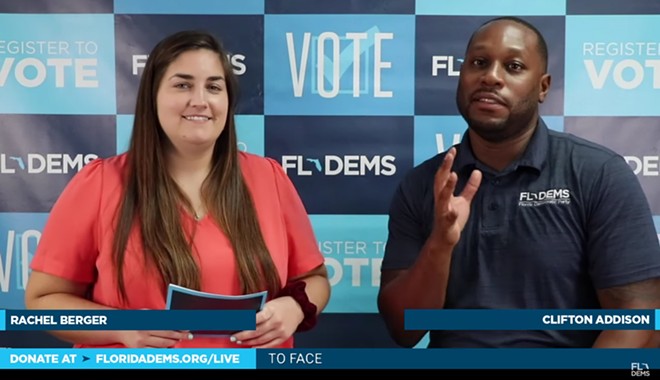