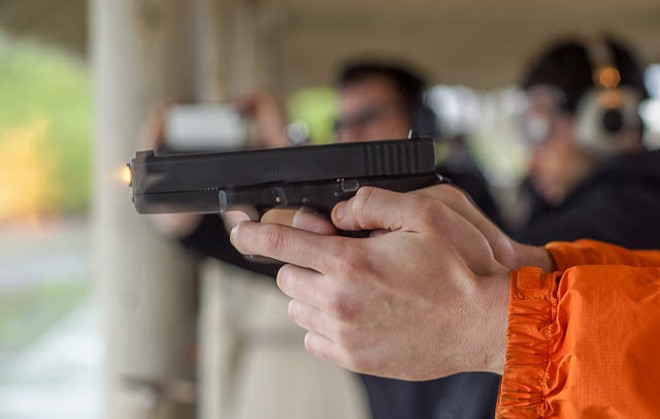 Photo by Peretz Partensky via Flickr
A move to shift the burden of proof in "stand your ground" self-defense cases is off to a fast start in the House, where the controversial proposal died a year ago.

The House Criminal Justice Subcommittee, voted 9-4 along party lines Wednesday to approve the National Rifle Association-backed measure (HB 245), which would shift the burden of proof from defendants to prosecutors during pre-trial hearings in "stand your ground" cases.

The bill, sponsored by Rep. Bobby Payne, R-Palatka, and Rep. Jason Fischer, R-Jacksonville, only has to clear the Judiciary Committee before reaching the House floor during the annual legislative session that starts March 7. A Senate version (SB 128) has already cleared its committees and could be one of the first bills approved by the full Senate next month.

Payne said the bill would strengthen the self-defense law and that concerns by critics are "certainly overstated."

"It does not protect those that are creating some type of felony or assault," Payne told reporters after Wednesday's meeting. "That is not what self-defense is for."

Opponents maintain the change would end cases before all the facts are revealed and contend that the "stand your ground" law has disproportionate effects, as it is used more successfully as a defense when white shooters kill African-Americans.

But Rep. Gayle Harrell, a Stuart Republican who was in the House when the "stand your ground" law was approved, said the proposal meets the intent of lawmakers who crafted the law in 2005.

"It's a shame that we have to come to this point of having to clarify, but I believe that that was the case," Harrell said.

Meanwhile, Rep. Jared Moskowitz, D-Coral Springs, said he could support the change if it were more narrowly defined to situations where there is "overriding evidence." But he expressed concerns about people who may use the defense when the only witness was killed in the encounter.

"It's blanket immunity and then we're saying to the prosecution, 'You have to undo that immunity if you have enough evidence,' " Moskowitz said. "And, 'Oh by the way you have to do it a pre-trial hearing,' when usually all witnesses may not have been identified and all the evidence may not have been gathered at that point."

The proposed change, which is supported by the Florida Public Defender Association, was approved by the Senate in a 24-12 vote last year, but failed to advance through the House committee process.

New House leaders, however, appear to have put this year's version of the bill on the fast track.

Phil Archer, state attorney in the 18th Judicial Circuit in Brevard and Seminole counties, maintained the proposal would drive up costs as more defense attorneys would request non-jury pre-trial hearings, which give the defense a "free preview of the state's case."

"If you flip the burden of proof, there will be zero risk to every defendant in every one of those use-of-force cases. They will ask for that hearing automatically," said Archer, representing the Florida Prosecuting Attorneys Association.

Lisa Wiseman, representing the Florida Coalition Against Domestic Violence, said she anticipates an uptick in people using the defense when charged with domestic violence, as victims are often reluctant to testify and cases do not have other witnesses.

However, proponents say the measure gives more protections to defendants.

"Anytime the state charges you with a crime, they have the burden of proof, all the way from arrest to the jury room," said Marion Hammer, lobbyist for the National Rifle Association.