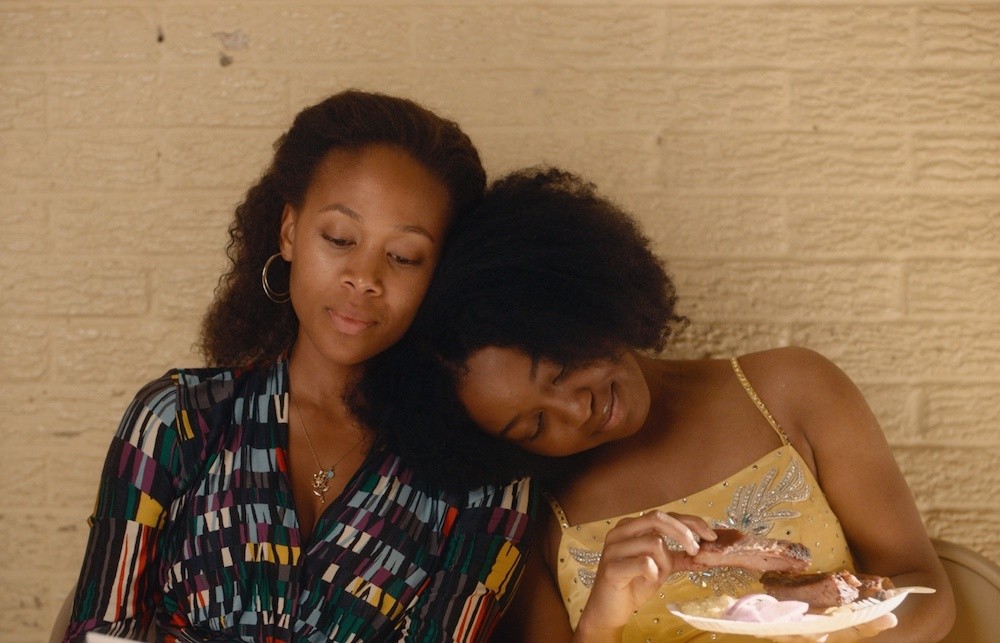 Donald Trump is holding a rally this weekend seemingly specifically designed to desecrate the commemoration known as Juneteenth, which honors the end of slavery in the United States.

One way to send a fuck-you to racist POS Donald Trump and his racist POS supporters would be to make the lovely new drama Miss Juneteenth as big a hit as possible on all the on-demand services this weekend. This should not be seen as a chore performed out of a sense of SJW duty – still, if I can guilt you into paying a few bucks to support a Black woman filmmaker telling a Black woman's story, I'm OK with that too. But writer-director Channing Godfrey Peoples' feature debut is a beautiful cinematic experience, bursting with a gorgeous sense of place and character – Miss Juneteenth is set in and was produced in Peoples' hometown of Fort Worth, Texas – the likes of which are rarer onscreen than they should be.

Nicole Beharie brings a strength and a weariness to Turquoise Jones, a former beauty queen and single mom trying to make a better life for her teen daughter, Kai (Alexis Chikaeze). Her strength is that of a woman with limited opportunities who knows the deck is stacked against her but who is determined to push through; her weariness is, frankly, of the same root. Turq is also exhausted by the demands and expectations of men, who fail to help in myriad ways even when they think they are, in fact, helping.

There's her not-quite-estranged husband, Ronnie (Kendrick Sampson), who never seems to have money to help support their daughter, but who keeps turning up with new toys for himself or with unexpected financial demands that he comes to Turq for help with. There's Bacon (Akron Watson), the successful businessman – he runs the local mortuary, which, as he notes, will always be an essential service – who would very much like to have Turq as a partner in work (she's a part-time cosmetologist for the recently deceased, just one of her jobs) as well as in life ... though clearly his attentions are, well, not necessarily unwelcome, but just too much additional work that she cannot cope with right now.

Meanwhile, Turquoise is struggling to come up with the money to get Kai into this year's Miss Juneteenth beauty pageant, which Turq herself once won. These are real pageants across the South offering real opportunities: more rarefied society than working-class Turq can offer, a full university scholarship, and a stamp of cultural approval that Kai might be unable to obtain in other ways. Kai doesn't seem wholly enthusiastic about the pageant, though.

Peoples wrestles here with a lot of complex American issues: Turq's problems arise not only from the color of her skin but from poverty and long-term family issues – though those are also made worse by the color of her skin. There is a delicate subtlety to how Peoples handles matters that are hardly unfamiliar in this sort of drama, much that she lets go by unspoken but which speak volumes anyway. Though no one says it, we guess that Turq was barely older than Kai is now – the kid turns 15 over the course of the film, and Turq is hardly past 30 – when she had her daughter, and that Mom is desperate to keep Kai from detouring her own life into too-early motherhood. But is Turquoise pouring her own detoured dreams into her child?

Perhaps most important of all is that Miss Juneteenth is about the vibrant, lively Black community around Turquoise, full of human lives of joy and pain and tribulation in which racism is not at all ignorable – "ain't no American dream for Black folks," someone says here – but isn't the totality through which their lives are defined. We don't see nearly enough movies about Black Americans that aren't about extreme trauma and outrageous abuse, just the everyday battle to pay the bills and raise the kids right. It shouldn't be the case, but white Americans need to see more movies like this one. I shouldn't need to say it, but Black Americans are just regular people. I hate that that sounds condescending, and I don't mean it that way: I mean only that filmdom hasn't accorded that mundane humanity to Black Americans anywhere near often enough. The mundanity of Miss Juneteenth is its graceful strength.

_
This story appears in the June 17, 2020, print edition of Orlando Weekly. Our small but mighty team is working tirelessly to bring you news on how coronavirus is affecting Central Florida. Please consider supporting this free publication with a one-time or monthly donation. Every little bit helps.