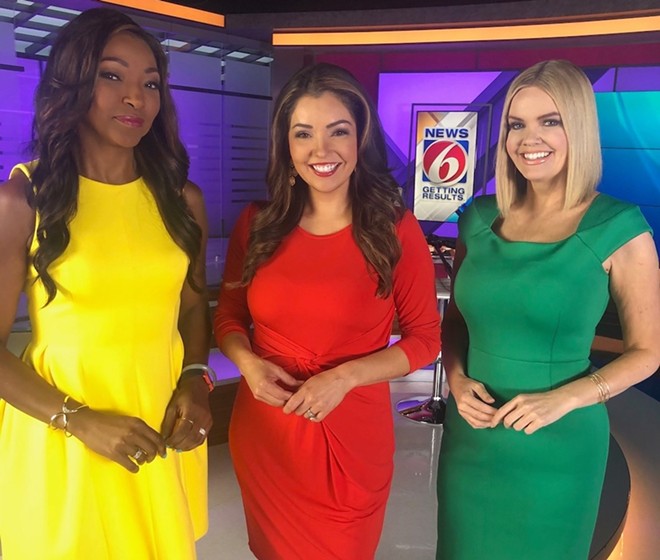 The two TV broadcasters were talking during an episode of the News 6 podcast "Florida's Fourth Estate" about the hate mail they receive. Austin says when anchors compete over who has the most intense hate mail, Broughton typically comes out on top, making her the perfect interlocutor on the topic of trolls.

"Lets start with rude," answers Austin. "Let's ease [listeners] into this life, this gangster life [Editor's note: Austin uses the preferable hard 'er' in his use of the term 'gangster,' not the always awkwardly forced spelling and pronunciation of 'gangsta'] that news anchors have." They actually get pretty real about the sexist and creepy shit that washes up on Austin's inbox and notification shores.

"All right," says Broughton, "I'll start with this one. First line: 'Hello, Mr. Broughton.'" After intentionally misgendering Broughton, this particular troll, who she says has made a habit of sending vile and disconcerting shit to her, in this message, told her sarcastically to wear more pants.

This asshole and those like them, full of keyboard confidence, shoot off their nasty missives from behind the distancing, protective glow of the screen in the hopes of hurting people. And, unfortunately, it works. We get to each other on these platforms from which none of us log off.

Broughton cared enough to look into who the jerk is. Austin straight-up admits that he stopped wearing tight-fitting, skinny suits because so many people called him out on it.

It sucks. Either way, Broughton is putting on a brave face.

"I mean, I'm still here," she says, casually, looking down, scrolling through troll manure. "He hasn't offed me." And she also maintained she is gonna be herself.

"You know I love a jumpsuit."

Stay on top of Orlando news and views. Sign up for our weekly Headlines newsletter.
© 2023 Orlando Weekly