Will Orlando Democrats feel the Bern or go with the Joementum?

As we've learned from the last four years, electing just any ol' body to the top seat of American power has consequences – scary, sometimes cruel, downright weird consequences. As these political times attest in the singular presidential era of Donald Trump, elected to the tippy-top in his very first campaign of his life, who we vote for really matters.

Now it's our turn. The Florida primary for the 2020 presidential election is Tuesday, March 17. Florida's is a closed primary, meaning voters may only vote for candidates who are affiliated with their registered party. For those registered Democrat, there have been few political instances in recent history that match today's need to rock the vote harder than a zooted punk throwing a trash can at a subwoofer.

The Democratic Party's race for the chance to take on the Donald has boiled down to a set of two options, though both are male, white and elderly: Choose Bernie Sanders and fight Trump's far-right fire with progressive lefty heat, or choose Joe Biden and try to extinguish the flames of Trumpism with a dousing of lukewarm establishment centrism.

In the early goings, after the Iowa caucus debacle and through the gratefully unremarkable contests in New Hampshire, Nevada and South Carolina, progressive stalwart Sanders came away with the most victories, outlasting Elizabeth Warren as the lefty candidate of choice, and surviving establishment favorite Joe Biden surged in South Carolina, despite early spurts of support for centrists like Pete Buttigieg and Amy Klobuchar.

On the all-important Super Tuesday, when a stack of states made their votes, including major delegate-haul states like California and Texas, the race swerved to the middle, out of Sanders' control. Mayor Pete and Klobuchar dropped out and endorsed Biden, who surged to take the bulk of delegates on Super Tuesday and take the overall lead in the race.

As the national race lands in Florida, the state with perpetual swing status hopes to avoid confusion akin to the Iowa caucuses. But accusations coming out of Lake County that a suspect committed election fraud, including switching the registration of voters from Democratic to Republican, point toward chicanery. For democracy's sake, perhaps that can be the lone blemish on Florida's 2020 primary.

As we began work on this story, there were six (OK, seven if you count Tulsi Gabbard) candidates in the game. Klobuchar and Buttigieg never opened field offices in the Orlando area – though Klobuchar's camp said they had people in the area to coordinate volunteer events for regional supporters and Buttigieg had a plucky Central Florida grass-roots network throwing multiple events a week – and Biden hadn't yet. Warren, Sanders and late entry Mike Bloomberg all set up working spaces. 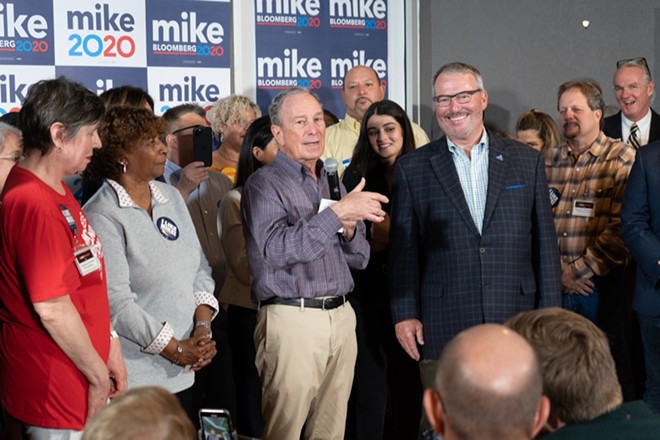 But Bloomberg, who had enjoyed encouraging poll numbers in Florida, announced the end of his upstart campaign soon after Super Tuesday, shuttering his Orlando campaign office. His now-defunct Florida operation had over 130 paid staffers and thousands of volunteers, according to campaign representatives. Bloomberg stopped by that downtown Orlando office on Super Tuesday to share his disappointing and ultimately campaign-ending results with eager supporters at Orange Avenue and Pine Street, in the area of local endorsers like Osceola County District 2 Commissioner Viviana Janer, Congresswoman Stephanie Murphy and Mayor Buddy Dyer.

Post-run, Bloomberg is said to be working on an organization to "help get Democrats elected," telling the Washington Post "I'm going to keep our campaign offices, the main ones, anyway, open until Nov. 3." At press time, neither the Bloomberg campaign nor the owner of the building at 29 S. Orange Ave. housing the field office was able to confirm immediate plans for the office. 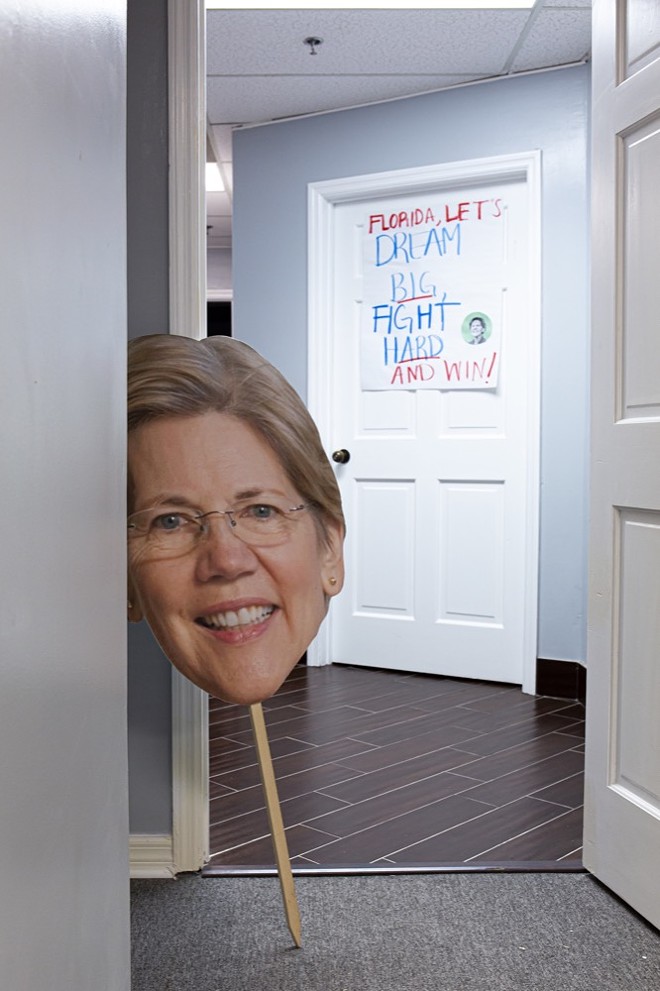 Warren, who was the first to open a local office (on Feb. 1), held a grand opening event at the SoDo location on South Rio Grande Avenue that featured Orange County Commissioner Emily Bonilla. Other high-profile visitors included actor Amber Tamblyn and former editor-in-chief of Out magazine Philip Picardi, who stopped by the office on Super Tuesday to stump for the Massachusetts senator and former law school professor.

It looks as though Warren's campaign underestimated the persistence of electoral sexism, though. The office closed shortly after Super Tuesday, after Warren suffered the particularly rough loss of finishing third place in her home state of Massachusetts. 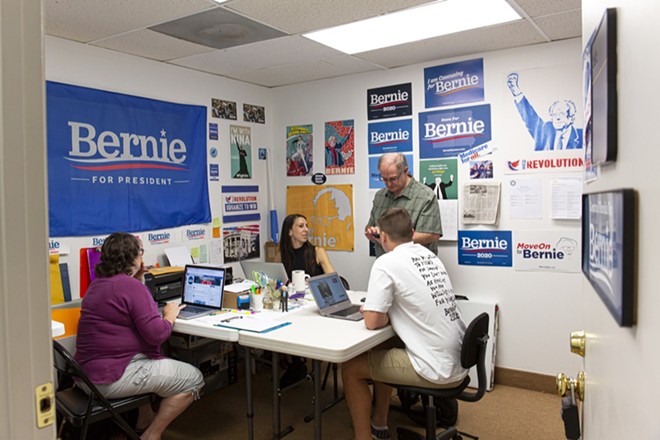 On the "heels of winning the most votes in the Iowa Caucuses and the New Hampshire Primary election," as the campaign put it, Sanders' team opened a tiny office on Aloma Avenue in Winter Park on Feb. 15, while Sanders still enjoyed a delegate lead. Now trailing Biden, Sanders' Central Florida staffers have switched gears from front-runner to second banana looking to leapfrog.

"Our office has no paid staffers," says Ricky Ly, a member of Sander's media team. "We are 100 percent grass-roots volunteers."

Biden, who has had the most support in the polls leading up to the Florida primary – soaring as high as over 40 percent of the vote – is the last to open an Orlando office. He's received some notable endorsement love from the area. Dyer, after Bloomberg called it quits, switched his endorsement over to Biden. U.S. Reps. Darren Soto and Val Demings also back Biden. (And, notably, Demings is picking up chatter as a possible VP pick, should Biden secure the Democratic nomination.) The former vice president and longtime U.S. senator is as establishment as it gets, which is something that appeals to older voters, a demographic that particularly stands out in Sunshine State voter turnout.

Florida, seemingly in perpetual swing-state status, has long factored as a key state in wrapping up either party's presidential nomination. Early polling has painted Biden as the favorite, absorbing the majority of support from Florida-favorite Bloomberg. Four years ago, Hilary Clinton trounced Sanders in the Florida primary by more than 30 points, and Sanders' recent comments admiring Cuba's universal healthcare system rubbed the majority of Cuban Floridians the wrong way. Sanders' success in the Florida primary will be an important indicator of his ability to pull the Democratic base into his progressive coalition.

The Biden push in the crunch time leading up to the primary began with former second lady Jill Biden linking up with Val Demings for joint appearances Sunday, March 8, at the Experience Christian Center, and at the Florida LGBTQ+ Democratic Caucus, where they, along with Orange County Mayor Jerry Demings and state Sen. Janet Cruz, stressed that the 'Do's gotta go with Joe.

Wednesday, five days before the Florida primary, both Biden and Sanders were scheduled to be in Orlando to participate in a forum hosted by the AFL-CIO. But that was canceled due to coronavirus fears.

Another wrinkle in this primary: The presidential primary race isn't the only primary being decided on March 17 – you'll also find county and municipal representatives, elected officials with a great deal of influence on day-to-day life for the residents within their constituent borders. Rock this part of the ballot with just as much metaphorical punk fervor, good voter, if you live in Apopka or Winter Park or Eatonville, or in any city that has elections for seats in their respective city halls on March 17.