Hot, blistering, cathartic melancholy that bows its head in mourning before exploding with a rage that only heartbreak or disenchantment can conjure: These are the sounds that Gillian Carter make. Brutal and beautiful, sometimes within the breadth of a two-minute song – what spews forth from this Orlando trio is nothing less than an assault on the senses. At the helm of this ship, navigating the turbulent waters of a strange post-hardcore sea of cinematic expressionism, is vocalist-guitarist Logan Rivera. It's his often dark lyrics and heavy themed songwriting, with "inspirations that can come from anywhere ... a new riff, life, events in history, different tunings," that have kept the engine of the band churning for a jaw-dropping 15 years.

"Next year is the 10th anniversary of our second record (Having Lost ...), so we have some ideas we're toying with." Rivera hints at some manner of anniversary happening in the works, but he "wouldn't want to spoil any surprises." The band are also working on material for a new release and, of course, relentlessly touring the planet.

"One state, one country at a time. We've been doing it for such a long time now that we can handle whatever the road throws at us and go with the flow," he says.

His plate may look full already, yet when Rivera isn't fronting Gillian Carter he's putting an equal amount of animalistic energy into drumming for local noise-punks Witchbender. "I have a couple of [other] recording projects I'm working on," he tells Orlando Weekly, "but those are just for fun."

Beyond metal, punk, screamo and all of the variations that lie therein, what other creative stirrings could be buried in the complex mind of this tireless worker bee? "Nu-disco, indietronica ... I'd love to start an indie-pop project like Metronomy or something," he confesses. 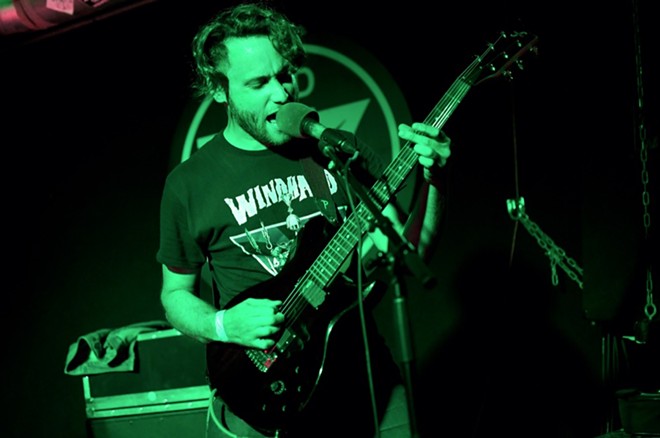 In addition to dabbling in various musical ventures, Rivera records a podcast called "Young, Hip & Sexual," a venture that finds him, bandmate Bob Caruso and friend Chaz Brockington "being goofy. In the show we never talk about the three subjects in the show name." New episodes are promised very soon.

He also enjoys painting: "I currently don't have any plans to release any artwork for this or any other bands, but if anyone is interested, hit me up."

At some point, he might also sleep – but not this week. This week, he and his band play Will's Pub on a bill that's topped by sludge masters of the swamp Black Tusk and Fort Lauderdale doom metal band Ether Coven. It may be an opening gig for the guys, but don't expect that to turn down the volume of their performance one bit.

"We treat every show like we're performing at Download Fest, so whether we're opening, performing in the middle of, or closing a show, we make sure all energy is at 110 percent." And if it's a crowd that's new to them, all the better: "Those crowds make us play harder."