By Jim Saunders and Jim Turner, News Service of Florida 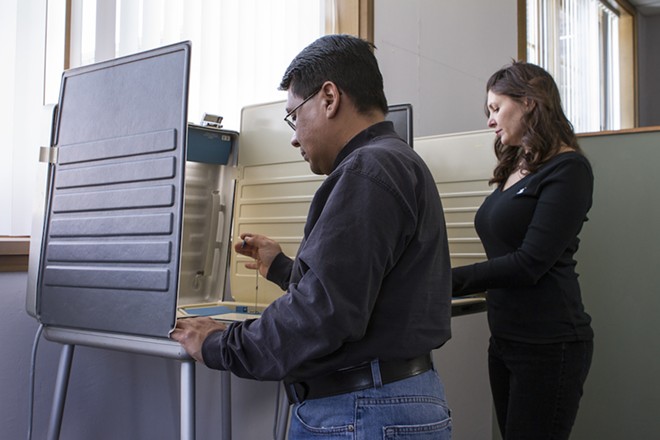 Photo via Adobe Stock
It’s dubbed a “jungle” primary system. And the Florida Republican and Democratic parties want no part of it.

Now, the Florida Supreme Court will decide whether a proposed constitutional amendment that would overhaul the state’s primary-election system will go before voters in November 2020.

Justices heard arguments Tuesday about the proposed amendment, which would allow registered voters to cast ballots in primary elections regardless of party affiliation. The two candidates getting the most votes in each primary would advance to the general election.

Moving to such “jungle” primaries would be a major change from Florida’s longstanding “closed” primary system, which generally limits primaries to voters registered with parties. Attorney General Ashley Moody’s office and the state Republican and Democratic parties are trying to keep the measure from reaching the November 2020 ballot, arguing at the Supreme Court that the proposed amendment would be misleading to voters.

“One of the things I am struggling with is if you have a basic understanding of how we do things in Florida, and if you actually vote, you do. And you read the (ballot) summary and give it a few seconds of thought, you’re going to realize the implications of it, it seems to me. And I’m just struggling as to why that’s not true,” Lawson said as Republican Party attorney Benjamin Gibson argued against the amendment.

Justice Carlos Muniz, however, repeatedly delved into part of the proposed ballot language that says, “All candidates for an office, including party nominated candidates, appear on the same primary ballot.” An implication of that part of the proposal is that parties would be able to nominate candidates in some way before the primaries – and Muniz focused on whether that would be adequately explained to voters.

The proposal says, “All candidates for an office, including party nominated candidates, appear on the same primary ballot.”

One possibility discussed during the hearing was that parties could choose nominees in “pre-primaries,” with those candidates then advancing to the primary ballot.

“The summary doesn’t tell you how the status quo is going to be changed because we don’t know how it’s going to be changed, right?” Muniz asked Glenn Burhans, an attorney for All Voters Vote, Inc., a political committee trying to get the measure on the ballot. “You don’t know how the parties are going to nominate people, if at all. You couldn’t. And that’s a huge, core aspect of the way we do things now.”

The Florida Supreme Court plays a critical role in determining whether proposed constitutional amendments reach the ballot. It is not supposed to weigh the merits of initiatives but looks at ballot titles and summaries – what voters see at polling places – to determine if the wording meets legal tests, such as not being misleading.

The All Voters Vote committee has submitted enough petition signatures to the state to get its measure on the ballot, making the Supreme Court review a pivotal final step. It is unclear when justices will make a decision on the proposal, which would apply to elections for the Legislature, governor and state Cabinet.

Burhans, who also chairs All Voters Vote, said after Tuesday’s hearing that primaries often determine who will win elections, which is “why we can’t just leave it to a small sliver of the extreme wing of either party to make that decision.”

But the parties, along with Moody’s office, have united to try to stop the proposal at the Supreme Court. Gibson, the Republican Party attorney, said the measure is misleading, at least in part because of the way it addresses the parties being able to nominate candidates.

“The key here is that the amendment is redefining what has been in place for over a century in this state of what a party nominee is,” Gibson said.

But Canady said the Supreme Court’s precedent has been to use a “deferential standard” when reviewing proposed constitutional amendments.