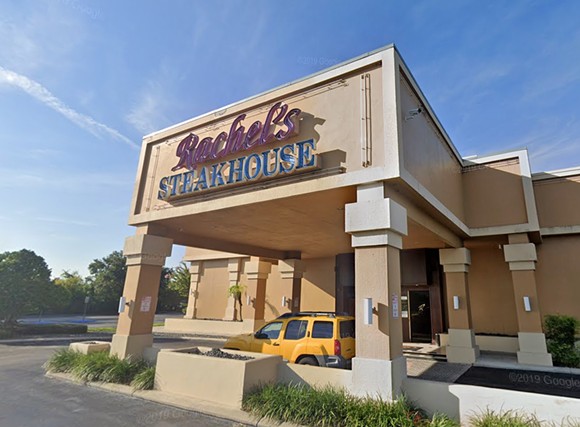 Photo via Google Maps
Two Florida women say they were discriminated against by the staff of an Orlando strip club, when they were denied entry for being without a man. Now the South Florida cities of Delray Beach and Miami Beach are rallying their legal teams to defend the women's civil rights.

Brittany Smith and Anita Yanes allege that in 2018, Rachel's on South Orange Avenue near the Orlando International Airport denied them entry because of a policy that women must be accompanied by a man to be let inside.
Using a cell phone, Smith and Yanes recorded the interaction with a Rachel's bouncer. "We don't let people in by themselves," the bouncer is heard saying, in video report by WPTV 5 in West Palm Beach.

Rachel's staff apparently failed to understand that women not only like boobies, but have the right to shower them with dollar bills too, with or without a man. The women said in a complaint that Rachel's policy runs afoul of Orange County's Human Rights Ordinance prohibiting discrimination on the basis of gender.

Rachel’s attorneys argued for a dismissal on the basis the complaint should have been filed under the Florida Civil Rights Act, instead of the Orange County Human Rights Ordinance.

Here is where Miami Beach and Delray Beach come in. They both filed amicus curiae, or "friend of the court," briefs in Orange County, pleading the court reconsider the dismissal of Smith and Yanes' complaint.

Delray Beach city leaders resolved on Tuesday to allow their city attorney's input on the case because "the Defendant's policy was in violation of Orange County's Human Rights Ordinance, which prohibits discrimination in a place of public accommodation on the basis of sex. Delray Beach has a similar ordinance."

This is more than just two cities with a wet dream that all genders can enjoy a strip club in Orlando. The fight over home rule versus state pre-emption laws has finally been taken to the club.