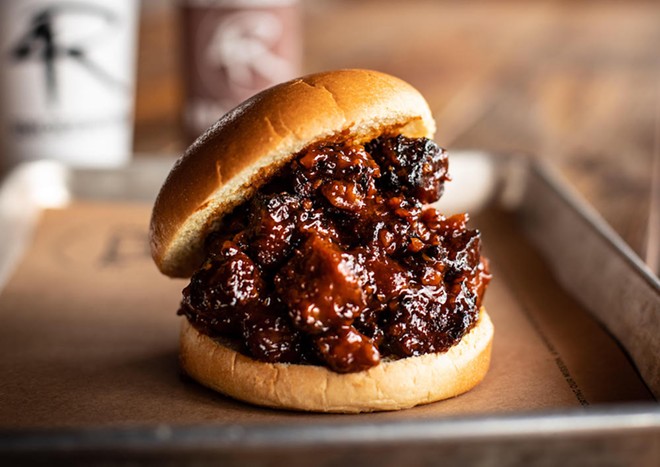 Photo courtesy of 4 Rivers Smokehouse
Last month, 4 Rivers Smokehouses rolled out a new plant-based barbecue sandwich called "Beyond Burnt Ends," a vegan meat alternative, to celebrate their 10th anniversary. Today, the Winter Park-based chain announced the sandwich and meat are available at all 14 of its locations in Florida and Georgia.

As before, only a limited amount of the veggie meat will be available every day, with the dish slated to lead a new "Beyond BBQ" vegan line, although they have not yet announced when other items will be available.

At $8.79, the sandwich isn't the cheapest item on the menu. The original Burnt Ends sandwich, made with brisket shredded with pulled pork, is $7.39. Both sandwiches are double hickory-smoked then slow-roasted to caramelize the sauce. The plant-based version has a vegan-friendly brioche bun and vegan sauce.

"The 4 Rivers culinary team spent months perfecting the Beyond Burnt Ends and we’re very proud that we’ve created a plant-based barbecue dish that has been so well received by our guests," said John Rivers, 4R Restaurant Group founder and CEO, in a release.

"A lot of people are surprised when learning that my wife Monica is a vegan," added Rivers. "Through her, I learned to appreciate the power of offering plant-based barbecue options, and the importance of making sure this product meets the high standards of the 4 Rivers brand."

Customers can purchase the standalone Beyond Burnt Ends by the half pound or pound, or as a complete dinner with three sides.

New plant-based barbecue is now available at all 14 Smokehouses in Florida and Georgia.