In just a few days and for the sixth consecutive year, punk bands from across the world will converge upon the City Beautiful for the one-night worldwide punk mini-fest Foreign Dissent. A labor of love for local promoter Craig Mazer of Punching Babies (let the record show that the babies are the ones throwing the fists), this evening of international intrigue is not only becoming an Orlando tradition, it's a testament to the universal language of outrage that is punk rock.

Latitudes aligned post-band practice, drummer Nicole Cain puts the phone on speaker and asks, "Can everyone gather around?" Bad Waitress is an all-women outfit out of Toronto, Canada. Kali-Ann Butala, Eva Moon, Katelyn Molgard and Cain hail from different parts of the country, bounded by sisterhood and a mutual love of '70s punk and Fugazi. As Molgard describes, "We're currently huddled around pedals and a bong." Each bandmate shared the phone, speaking to the dynamic music scene in Toronto, their kinship with the characters in CBS' Florida Girls and solidarity. "No matter what kind of shit we're going through on tour, we support other women," Molgard says.

Bad Waitress is quintessential punk; their 2018 release Party Bangers: Volume 1 is raw, enraged and perfect for the pit. The band is driving two straight days from Toronto to Orlando to kick off their American tour. "We're preparing our bodies for another shit show ... and we wanna see alligators."

"We are Teenage Bubblegums, dressed in black, fast songs, sad stuff." Ally, Billy and Mingu of Forlì, Italy are in the midst of a nationwide American tour. "Craig invited us to join the show, and we said immediately hell yes," says the band in a group email while packing up for their tour. The bands 2019 record In Limbo is 10 songs and 14 minutes long, thrashing guitars and feverish drums accompanying Ally's bewitching vocals.

Rebuking the alt-right in the middle of the afternoon, still hungover from the night before despite three cups of coffee, is exactly how you would imagine the lead singer of an Irish punk band. Adam Carroll of Good Friend does not disappoint: "I ain't afraid of no Nazi. We are an anti-hate band." Born out of the Causeway Coast of Northern Ireland, Good Friend is Carroll, Izzy Curran and Andy Reid. The band embraces its Irish roots and finds strength in the struggle of these times. 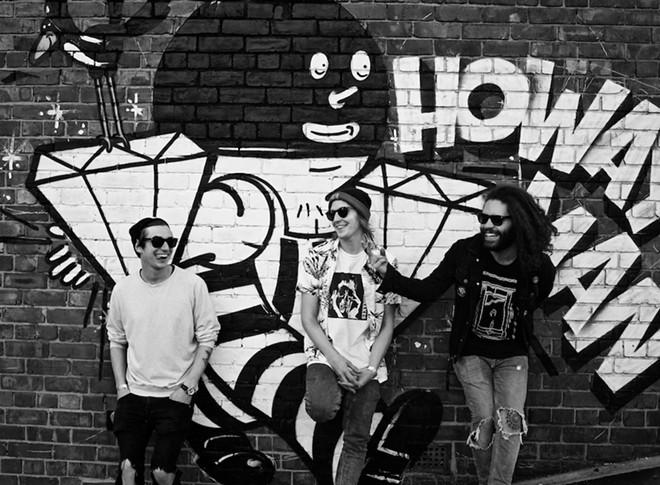 "Our band is a juggernaut," Carroll laughs, "playing Irish punk rock, writing songs about where we're from, trying to leave our mark." The closing track of their 2016 album Ride the Storm, "Irish Goodbyes," captures this spirit. "If you want to drink whiskey, you best keep up/Because my bad habits don't mix with your bad luck." Good Friend only has two stops in the states, one of them being Orlando. Consider that the luck of the Irish.

Each of these bands is on its own journey, brought together by a common thread that enjoins so many of us: Gainesville's annual punk throwdown, Fest ... and a desire to see some alligators. The commitment to jet from one side of the globe to the other is a massive undertaking; the costs to make the trip are exorbitant, customs can be a drag (especially now) and countless variables can go wrong. Yet these artists believe in something much greater than themselves. It's the magic found in the exchange of meaningful music, and the intrinsic power of punk, that provides the fuel. Join in the Foreign Dissent next week.