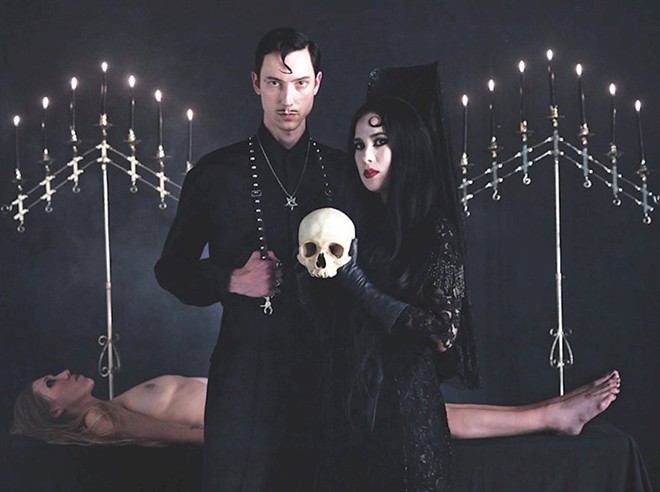 Being the most wicked band in the world isn't easy. But for Twin Temple, a self-proclaimed "Satanic doo-wop" duo hailing from the City of Angels, it was never meant to be.

"We knew going into this that it's not gonna be for everybody," says vocalist Alexandra James of the project formed with her partner, Zachary. "We didn't make it to be for everybody. We're really only trying to please ourselves."

And please themselves they have. The two became one (hence the project's name) on Halloween 2016, and they've been spreading their love for Lucifer ever since.

With the release of their debut album, Twin Temple (Bring You Their Signature Sound ... Satanic Doo-Wop) in 2018, the couple gained a cult following devoted to their sinful merger of golden oldies and the occult. Combining the sounds of the '50s and '60s with "a passion for practicing magick and Satanic ideology," their witches' brew of occult philosophy, politically charged lyrics and toe-tapping tunes raised eyebrows and ruffled feathers.

Perhaps the most notable opponent of the James' unholy gospel is right-wing conspiracy theorist Alex Jones. Citing an L.A. Times article, the notorious InfoWarrior dedicated an entire episode of his (thankfully) now-defunct YouTube show to decrying the band for being "pure evil." Shortly after Jones confirmed Twin Temple's diabolical nature, the band was inundated with hate mail and death threats. Yet, ever true to themselves, they accepted such opposition as "part of the territory" and continued down the Left Hand Path.

Along the way, they've found kindred spirits in the damnedest places. During a recent tour with heavy metallers Uncle Acid & the Deadbeats and Graveyard, they did "a huge run through the Bible Belt," James recalls. "We were a bit nervous beforehand because we were wondering how they would react. The funny thing was, they were all hailing Satan right there with us." With all this talk of Satan, one can't help but wonder what the hell they really think of the devil.

"To us, Satan is a symbol," explains James. "We don't believe there is a literal person with red face paint sending sinners to some imaginary hell after they die. It's more like the original rebel angel, the first adversary, the first dissenter. We champion that as a symbol of the rejection of authority and instead turning to the self."

This doesn't stop Twin Temple from occasionally personifying Satan for their own sinister purposes, however. Earlier this year, they released a single titled "Satan's a Woman," in which Alexandra performs the role of her infernal majesty, commanding listeners to "bow down to the queen." Regarding the song's title, she says, "We didn't get into this to create yet another patriarchal setup. A true Satanist doesn't have a gender, but it felt subversive to say, 'Hey, why are we assuming Satan is a man?' So we just wanted to flip it on its head a little bit."


On the single's B-side, "I Am a Witch," James further spells out the band's stance on a historically male-dominated society with a call to "hex the patriarchy."

In keeping with the Satanic tradition, Twin Temple uses the tenets of the occult as tools of self-empowerment. "[It's] about donning the vestments of that which is feared," James says. "It's about taking what has traditionally been used to disempower and turning that around by saying, 'Yes, I am a Satanist. I am a witch. I am a devil worshipper.'" And to that we say: Hell yes.

Get our top picks for the best events in Orlando every Thursday morning. Sign up for our weekly Events newsletter.
© 2022 Orlando Weekly