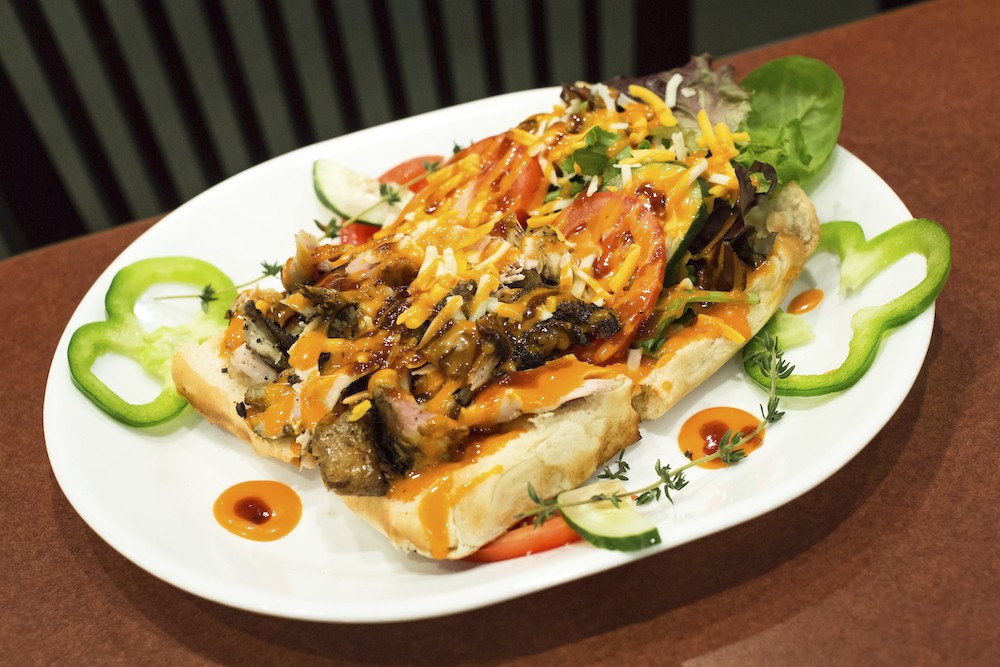 Much can be said, and has been said, about post-colonial food histories and how we view these experiences through the lenses of race, class, gender and immigration. As disparate as Jamaica and England are as countries and cultures, the two are, of course, forever tied by the gastronomic bonds of colonialism, yet most Jamaican restaurants here rarely give their old colonial rulers the time of day. Oh, sure, beef patties have the unmistakable imprint of their Cornish pasty predecessors, but when was the last time you saw cottage pie on the menu of a Jamaican restaurant?

You will at Jam-Eng, a laid-back downtown diner with an island clock at its heart. As the name suggests, Jam-Eng (pronounced jamming) celebrates its history not through a patois of dishes melding the two food cultures, but in very separate and equal terms: Jamaican dishes are listed on one side of the menu, British dishes on the other. Owners Wayne and Caroline Harvey purposely drew it up that way – he's Jamaican and she's a Brit (though half-Jamaican as well), while the kitchen falls under the auspices of chef Oran Wright, who's also of Jamaican descent. Wright has worked in various restaurants about town – among them Umi Winter Park and Gringos Locos – but it was Wayne Harvey, not Wright, who manned the kitchen when we first popped in for a meal.

With only one server patrolling the takeout area and the main dining room, the slow tick of that island clock could be heard loud and clear. Asking if we were ready to order before even giving us menus is one thing; but then disappearing for a half-hour and leaving the restaurant serverless was, like, sooo Ocho Rios. We ended up poking into the kitchen to ask for our check, but that was long after digging into some pretty colorful platters. Big ups to turmeric-tinged curry chicken ($10.99) with potatoes served with rice and peas and steamed cabbage; ditto for thick, saucy oxtail stew ($16.99) notable for a temperate use of allspice. A brightly hued onion-pepper-carrot relish framed a simply fried whole snapper ($15.99), but parts of it were a bit tough – perhaps from being frozen too long? And, of course, there's jerk chicken. Whether in wing form ($3.99) or entree ($11.99), these well-coated pinions will pique the interest of those with a preference for a vinegary jerk.

But what of the British menu, you ask? "Sorry, there's nothing available from the British menu tonight," we were told. It was only 7:15 p.m., but a party of ravenous redcoats had apparently wiped them clean earlier in the day. So we gave the beef patties ($2.99) a go – they have roots in Cornwall, after all – and these flaky house-made pockets are worth picking any day. Stuff one into soft, doughy coco bread ($4.99) and you've got a cheap and filling lunch. I did get to sample Jam-Eng's Brit fare on a subsequent visit, though neither a subpar cottage pie ($12.99) with ashen-topped mash, nor the drab ploughman's sandwich ($6.49) with cheese, lettuce, onions, tomatoes and cukes served with a side of French dressing (?) warranted the return trip. (Where was the Branston's pickle?)

But Wright was in the kitchen on that visit, and his plating of the jerk chicken utterly outclassed Wayne's. I'm talking quartered legs precariously stacked vertically; a gravy boat of jerk sauce; molded rice embellished with strategically placed field greens – the whole bit. Wright even busted out the squeeze bottle to add a few trippy dabs of dressing to the jerk chicken sammie ($7.99) and, call me crazy, but even the oxtail stew looked a lot more vibrant than the version we ate a few days prior. 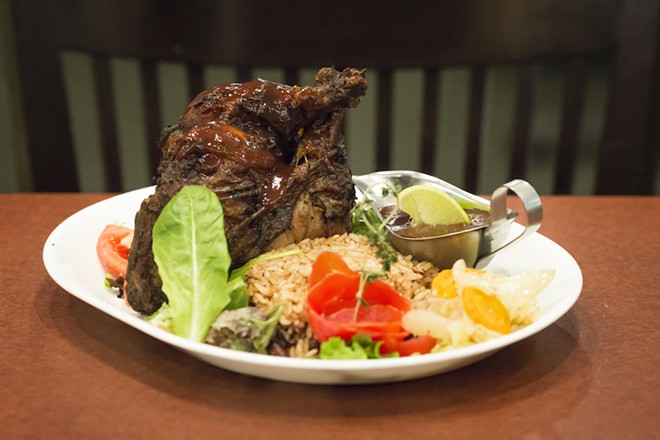 Clearly Wright exhibits a zeal for Jamaican cuisine, while the Brit dishes appear to be treated as afterthoughts. Wright mentioned, perhaps anecdotally, that only 1-2 percent of customers order items off the British menu. Can't say that's very surprising. In fact, if I held sway over Jam-Eng's menu, I'd say it's time to bid England, and not Jamaica, farewell.